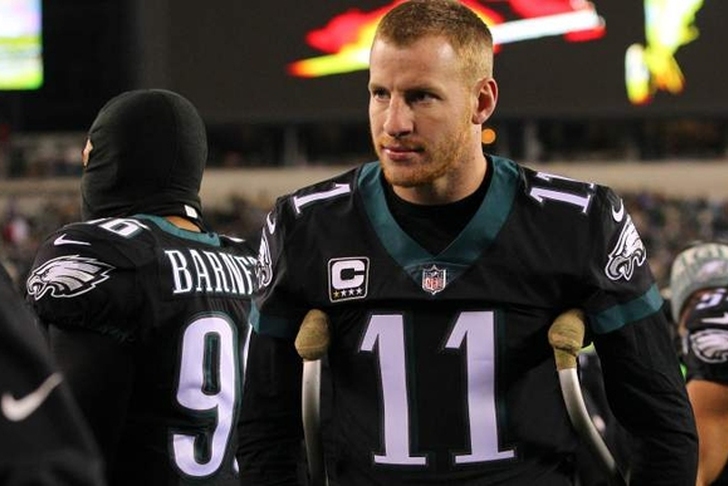 It's May and the NFL rumors are swirling around some of the first round rookies from the 2018 NFL Draft and the availability of Philadelphia Eagles quarterback Carson Wentz for Week 1.  Wentz suffered a torn ACL in Week 14 against the Rams and was forced to miss the remainder of the season, but what is his game plan for a target return in 2018? The Seattle Seahawks selected San Diego State running back Rashaad Penny with pick 27 in this year's draft and with such high draft capital spent on him, will Penny be a three-down running back? Last rumor on today's tab is where will the Oakland Raiders play first-round pick Kolton Miller on the offensive line? Here are today's top NFL rumors you don't want to miss:

Carson Wentz Will Be Ready Week 1?
That's the plan that Wentz will be ready Week 1. Wentz suffered the ACL tear in December appeared on Good Morning Football today and seemed confident that he will be good to go for Week 1.

"Rehab has been great," said Wentz. It's quite the process. So far everything is going well. My goal is to be ready Week 1. As an aggressive player, I'm not going to change. I believe I'll be back better than ever."

The Eagles won't need to rush back Wentz because they have Super Bowl LII MVP QB Nick Foles, who proved he can be a reliable replacement in 2017. Obviously, the Eagles want Wentz behind center, because before he suffered the injury he was an MVP candidate and had 33 touchdowns and only seven interceptions in 13 games.

Rashaad Penny Will Be A 3-Down RB For Seattle?
According to the Seahawks Wire, Seahawks head coach Pete Carroll envisions RB Rashaad Penny being used on all three downs. This makes sense considering the draft capital Seattle spent on Penny with pick 27 in the first round of the 2018 NFL Draft.

Carroll and the rest of the Seahawks coaching staff got a good look at their new running back this past weekend and seemed very impressed by his ability to catch the football.

“He caught the ball beautifully,” Carroll said. “He can do whatever we need to do in the throwing game. Schotty (Brian Schottenheimer) did a nice job of mixing some stuff in so we could see him doing different route concepts, so we had a real good variety of things that we looked at in and out of the backfield.”

Penny will be competing with veteran Mike Davis and a seventh-round pick in the  2017 NFL Draft, Chris Carson for touches in 2018.

Kolton Miller To Play LT For The Raiders?
It appears that the Raiders first-round pick in the 2018 NFL Draft may be responsible for protecting quarterback Derek Carr's blindside in 2018. According to ESPN's Paul Gutierrez, Miller has been working out exclusively on the left side of the Raiders' offensive line.

"We like Miller at left tackle," head coach of the Raiders'Jon Gruden said on Sunday. "He can bend, he's got the length that you're looking for and he's a sharp kid. That doesn't mean that's where they're going to end up, though."

This is interesting because Oakland has a Pro Bowl caliber left tackle in Donald Penn. It was believed that Miller would play right tackle, but perhaps with an aging Penn who will be 35 during the 2018 season, the Raiders might be planning for the future earlier than expected.

Miller was a reliable left tackle in college earning second-team All-Pac 12 while blocking Josh Rosen's blind side in 2017.