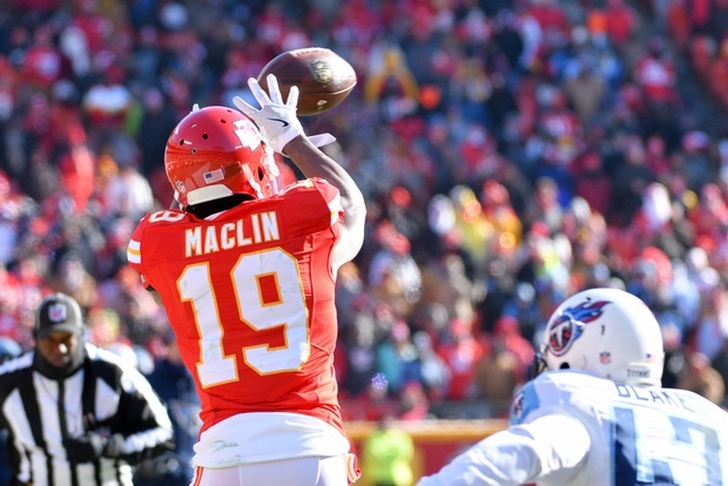 The NFL offseason is in a bit of lull, even though OTAs are now underway. However, there are still a few notable free agents left on the market, including WR Jeremy Maclin, who was surprisingly cut by the Kansas City Chiefs Friday. The latest rumor is that he might have a new team in the near future. Here are all the latest NFL rumors you need to know.

Bills "In Preliminary Talks" To Sign WR Jeremy Maclin
Earlier today, RB LeSean McCoy said he was recruiting WR Jeremy Maclin to join the Buffalo Bills. That might be working, as there's a report the Bills are in talks to add the talented WR.

#Bills are in "preliminary talks" 2 sign Jeremy Maclin, per source. LeSean McCoy is recruiting the WR and the team wants him onboard as well

A deal is far from done, but the Bills do make sense for Maclin. In addition to getting to reunite with McCoy, Maclin would help out a Bills WR corps that badly needs help. Outside of Sammy Watkins and rookie Zay Jones, the Bills don't have much at the position. The Bills were among the teams listed as potential landing spots for Maclin.

Nick Fairley's Heart Issues
The future of New Orleans Saints DT Nick Fairley is in jeopardy because of a pre-existing heart condition. Fairley has been away from OTAs dealing with a medical issue and various reports indicate it's because of his heart.

Saints DT Nick Fairley has been absent from OTA's bc of medical issues. Tests show heart trouble that could jeopardize future of his career.

#Saints DL Nick Fairley had a heart condition that came up in his pre-draft physical. The one being checked out & tested now is the same one

Nick Fairley was seen by a doc who asked for full tests. He complied. More info is better. Nothing final yet. But he played 7 years with it.

That Fairley has played for seven years with the condition is a promising sign. Still, it's a worrisome development for a player the Saints just gave a four-year, $28 million deal to. The Saints are thin at DT if Fairley is unable to play. Raw 2016 fourth round pick David Onyemata would be next in line to replace Fairley. Of course, Fairley's health is the main priority.

Jets To Ask Demario Davis To Take A Pay Cut?
The New York Jets traded Calvin Pryor away for LB Demario Davis, but there's no guarantee the linebacker will make the roster. In fact, he might not make the roster. ESPN's Rich Cimini suspects the Jets will ask Davis to take a pay cut to make the roster as a backup. Davis has a $3.7 million salary for this year, none of which is guaranteed. That would allow the Jets to cut him with no real penalty, freeing up more cap space. But, Davis would provided needed depth as the No. 3 ILB for the Jets.