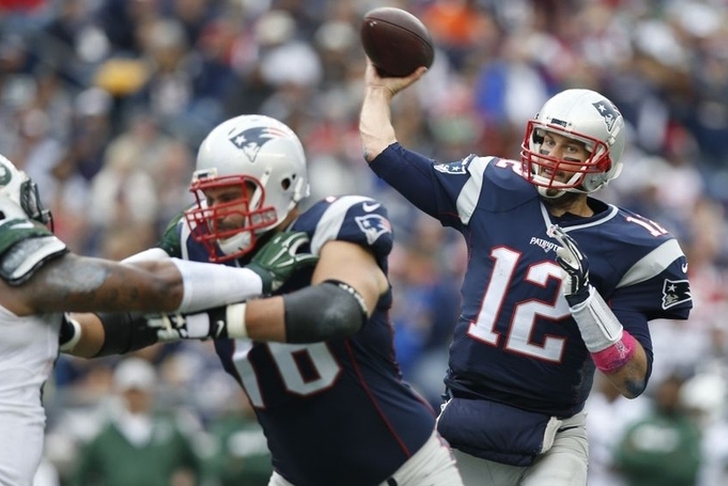 Eight weeks of the NFL are now complete, and we have a solid idea of which teams are legitimate playoff threats. We've gone away from the Power Rankings the past few weeks, but we're back. This list should change quite a bit each week and shouldn't be taken as gospel. While records are a big factor, power rankings are more than just a team's wins and losses. With that in mind, here are the NFL Power Rankings for Week 9.

Maybe the NFL shouldn't have gone after Tom Brady with such aggression. It looks like Brady is trying to make every team he faces pay for what the NFL did to him. New England has done nothing to prove they aren't the No. 1 team.

The Bengals don't get much national love, but this team is legit. They deserve at least a Top 3 rankings.

The Broncos defense has been incredible. Peyton Manning, however, has not. But even Peyton shines in comparison to the atrocity that is the Broncos' running game.

The Panthers are 7-0 for the first time in franchise history. It hasn't always been pretty, but undefeated is undefeated.

A loss to Denver isn't anything to be deeply upset about. The Packers are still one of the best teams in the NFC.

The Cardinals haven't played the toughest of schedules, but I can't overlook their crazy, point differential.

It hasn't been pretty without Big Ben, but this is still a good Steelers team. They are above the Falcons and Vikings because I firmly believe Pittsburgh would win a head-to-head matchup with either.

The Falcons really should be 8-0, but have come up short twice in recent weeks. Still, an easy schedule means the Falcons look like strong playoff threats.

I'm not sure the Vikings are truly as good as their record says, but it still counts for a lot. The Vikings look like playoff contenders, but need to beat the harder teams coming up on their schedule. We'll know just how good the Vikings are after they play the Rams, Raiders, Packers, Falcons, Seahawks and Cardinals in a row.

I'm worried about Ryan Fitzpatrick's injury, but I won't dock them quite yet. This team can compete for a playoff berth. The teams from 10 to 15 are pretty much interchangeable and I have no issues with any shuffling.

I really don't know what to make of this team. Todd Gurley is a monster, but Nick Foles is inconsistent. They are potential playoff contenders.

I don't really believe in this Seahawks team. Many of their wins have been far too close. Still, they could very well make the playoffs.

This Saints team has totally turned things around from the start of their season. Now the challenge will be keeping that going and making a playoff push.

This is a young team that isn't consistent yet. Expect growing pains and flashes of talent throughout the season. Still, a playoff run is very much in the picture for the Raiders.

The Giants really should be 5-0. With Romo out, the Giants are capitalizing. I consider them the favorites in the NFC East right now, even if the wins haven't been pretty.

The Dolphins look totally different under Dan Campbell. Lamar Miller needs to keep getting touches, and if that happens, the Dolphins have a playoff chance.

The Bills need Tyrod Taylor back soon. They just don't look as good without him. He might be back Sunday and if the Bills win, they could take a jump.

The Colts have flaws major flaws and I'm worried about this team. Of course, they play in the AFC South, so that makes things much easier.

I still don't trust Kirk Cousins or Washington. Still, an NFC East run is a possibility.

No Jamaal Charles hurts. The Chiefs need a win over Denver to keep their playoff hopes alive.

The Texans won't compete with the best until they find a QB.

The Bucs are improving, but are still at least a year or two away from competing. The Bucs have a more impressive win than the Texans, but the Texans won the head-to-head matchup.

It's been a rough past few weeks for the Chargers. Something needs to change quickly for them to make a playoff run. Getting a running game would help. Figuring out how to rank the Chargers-Browns-Ravens was tricky. Any order for those three is fine with me.

With such little offensive firepower, it's tough to trust Cleveland this season.

It's been a rough season for the Ravens. The loss of Steve Smith only makes things harder.

Dallas needed to tread water until Tony Romo and Dez Bryant return. The Cowboys have failed to do that. The season is slipping away.

The Jaguars have some young talent, but haven't put it all together yet.

It's only a matter of time before Jim Caldwell is fired.