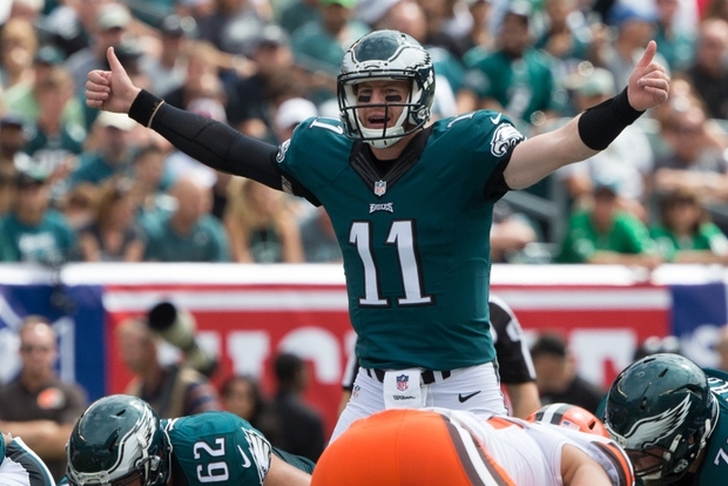 The NFL is confusing and proves us every week that any team can win. Also, our views on our NFL Daily Show on Facebook Live tell us every week how crazy our rankings are so, if you think you're smarter than our experts look below.

32.) Cleveland Browns (0-5)
Last Week: 32
The Browns benched Deshone Kizer and the circus that is the Browns looks to be in full swing yet again.

30.) NewYork Giants (0-5)
Last Week: 30
The Giants lost Odell Beckham Jr and Brandon Marshall for the year. As if this offense couldn't get worse.

29.) Chicago Bears (1-4)
Last Week: 27
Mitchell Trubisky showed signs of promise but when the game mattered the most he threw an interception. Growing pains ahead for the Bears.

28.) Los Angeles Chargers (1-4)
Last Week: 29
The Chargers finally gave Melvin Gordon a ton of work and wouldn't you know it they won. Chargers aren't as bad as their record indicates.

27.) Indianapolis Colts (2-3)
Last Week: 28
The Colts are still waiting on Andrew Luck to come back but Jacoby Brissett is proving to be a decent replacement.

26.) Miami Dolphins (2-2)
Last Week: 26
Beating the Titans without Marcus Mariota is nothing to brag about. It would be like bragging about winning a participation trophy.

25.) Arizona Cardinals (2-3)
Last Week: 23
The Cardinals may set the NFL record for most pass attempts in a season. Maybe Adrian Peterson will help, maybe?

24.) Cincinnati Bengals (2-3)
Last Week: 25
The Bengals have looked much better since starting 0-3 and changing offensive coordinators.

23.) New York Jets (3-2)
Last Week: 24
The Jets are on a three-game winning streak if they beat the Patriots this week, the entire Jets fanbase may go streaking.

22.) Tennessee Titans (2-3)
Last Week: 19
No Mariota for the Titans isn't pretty. Losing to a Dolphins team that has been moving on offense much like a real-life dolphin on a football field.

21.) Tampa Bay Buccaneers (2-2)
Last Week: 17
They were only able to score 14 points against the Patriots defense. On the positive side, Doug Martin looked really good.

19.) Oakland Raiders (2-3)
Last Week: 18
Derek Carr is expected back this week which is music to the ears of Raiders fans because without him they are a black hole on offense.

18.) Dallas Cowboys (2-2)
Last Week: 14
The Cowboys did blow a 21-6 lead. It was against Aaron Rodgers but again the Cowboys can't lose games when they have a huge lead.

17.) Baltimore Ravens (3-2)
Last Week: 22
The defense is carrying this team. Joe Flacco and this passing game make me sick.