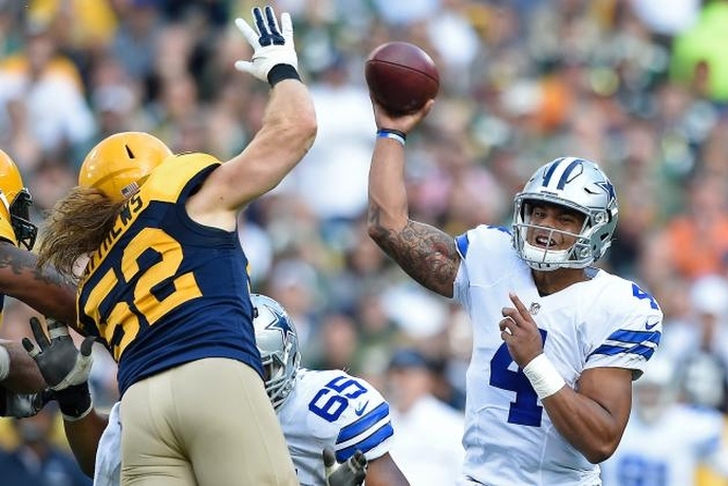 The Dallas Cowboys will host the Green Bay Packers on Sunday in the marquee NFL playoff game of the weekend. Dallas comes into the game off a bye after securing the top seed in the NFC during the regular season, and beat the Packers, 30-16, in the regular season matchup between the two teams. As for Green Bay, they are as hot as any team in the league, winning their last seven games in a row. They are also coming off a dominant 38-13 win over the Giants in the wild card round.

Which team will advance to the NFC Championship Game? Here's our preview and prediction.

What They're Saying About The Dallas Cowboys:
Cowboys Hype Video (Chat Sports)
Emmitt Smith heaps praise on Ezekiel Elliott (ESPN)
Why The Cowboys Will Beat The Packers (Chat Sports)

Key To The Game: Green Bay's Defense vs. Dak Prescott
The Cowboys won their first matchup against the Packers this season largely because of their ability to run the ball. They will try to keep Aaron Rodgers off the field and control the game by running the ball, and no one is better at it than Ezekiel Elliott and the Dallas Cowboys. Elliott hasn't received a full workload in nearly a month as Dallas rested him to prepare for the playoffs, so he's rested and ready to go. He gashed the Packers for 157 yards in their previous matchup, and he'll receive a heavy workload this weekend. If Green Bay can't slow him down, Dallas will control the game and win again.

Prediction: Cowboys win 30-27
Aaron Rogers is hotter than any player in the NFL right now, so you know the Packers are going to put up points. However, I expect Dallas' offense to be clicking on all cylinders as well. They'll be able to run the ball with Elliott, which will make Dak Prescott's job easier. The game will be close throughout, but expect the Cowboys to pull away in the fourth quarter.