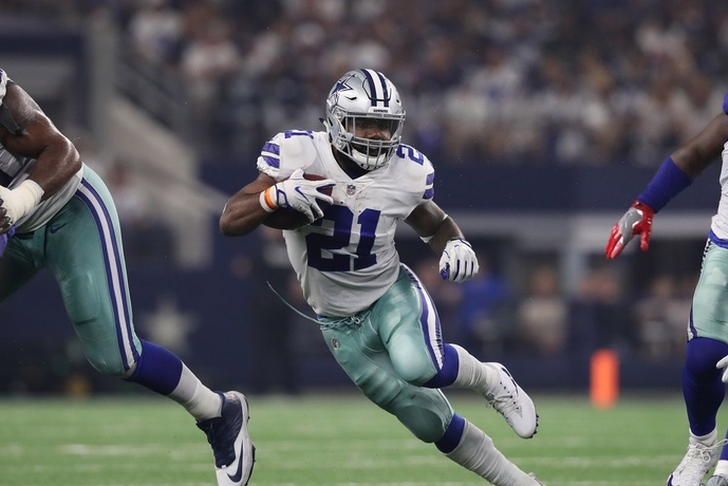 In the wake of a lawsuit against the NFL over Aaron Hernandez' CTE, the NFL held a media conference call with Joe Lockhart, the executive vice president of communications. Lockhart answered various questions from selected media members on topics including Aaron Hernandez, CTE, Ezekiel Elliott's suspension, the 2018 NFL Draft location and more.

The transcription of the limited-media press conference with NFL PR head Joe Lockhart is below. It begins with a fairly long opening statement, followed by some questions from media members.

I will address some of the issues around the Aaron Hernandez case and then we can get to your questions. We are reviewing the lawsuit now. On first look, the claim will face significant legal issues, and we intend to contest the claim vigorously. Any attempt here to paint Aaron Hernandez as a victim, we believe is misguided. His personal story is complex and doesn't lend itself to simple answers. It is complex, and I think everyone should resist to unpack this story with a simple explanation. We do have to remember that he was convicted of a homicide, and his well-documented behavioral issues began long before he played in the NFL.

The real victims here are the friends and family of the man who was killed and those left behind, particularly Hernandez's young daughter. At the time of his suicide, we talked about the benefits available to her through his NFL service, which involve a number of programs that are outlined in the CBA.

Taking one step back, I think this case does highlight a critical point and it goes to the consensus among the scientific community to how much they still need to understand about CTE. We've talked in the past about the conference that happens every four years where the leading neuroscientists gather to share the latest research and discuss concussions and CTE.  The idea of that conference is to develop a consensus of what is known and what further research is needed to be done to find a more scientific-based explanation. One quote from the report they put out this year in the Berlin conference: "The literature on neuro-behavioral sequelae and long-term exposure to recurring head trauma is inconsistent. More research on CTE is needed to understand the extent to which the neuro-pathological findings cause specific clinical symptoms." A simpler explanation of what that means is that this is a very complicated puzzle. Every piece is important – wherever it comes from, whatever institution, whatever science – to getting the definitive answers on both causation and incidents of CTE.

There are a lot of dots here. Science just hasn't figured out how to connect them yet. I was struck by one writer this morning who wrote the following: "Until we know why Aaron Hernandez had CTE and was a sociopath while Frank Gifford had CTE and was productive into his 80s, we know nothing." I think we do know a lot and we're learning more every day, but the ability to connect all these dots in a simplistic way that suggests causation - and that has been written about extensively over the past 24 hours - is in the category of speculation, as opposed to scientifically-based. A lot of what gets reported on is not what scientists view as broad-based samples to draw scientific conclusions, but instead, individual case studies. To give you an example, we've spent the last 14 hours talking about Aaron Hernandez and his suicide, and there actually is a study by the Center for Disease Control looking at 3,500 former NFL players which found that NFL players commit suicide at half the national rate. That's broad-based science. It doesn't answer the question definitively about any one case, but there is a risk at looking at individual case studies and then drawing a broad conclusion about the science. There is a proliferation of studies using very small cohorts of self-selected groups that make great headlines, but the broad-based scientific studies like the one out of the University of Pennsylvania from earlier this summer, looked at thousands of high school football players over a long period of time in Wisconsin and found no increase in cognitive impairment or depression later in life when compared to people who did not play football. I think we would all do well to focus as much or more on the broad scientific studies than individual case studies.

Check out the NFL Daily Podcast iTunes and Google Play!

There is obviously much more to learn. The NFL is devoting a significant amount of resources towards independent scientific studies and a lot of resources around trying to create better equipment with the engineering roadmap. We've changed over 50 rules around health & safety, some of which have caused a great debate on whether we've gone too far. We don't believe we have. We believe we're headed in the right direction. We are not waiting on the science to give us all the answers. We are moving now, but again, I would caution against connecting the dots as clearly as some have – not just in this case but in others, as well.

What is the NFL's strategy for fighting the lawsuit?

JL: There are a number of issues. We just saw this last night, so I am going to refrain from getting into the details. Maybe next week when we've had a chance to review it we can get into more detail. On first blush, there were a series of things that jumped out.

Does the concussion settlement play into this at all?

JL: That is an issue that we're going to have to look at. Whether he was part of the class or chose to opt-out, our research on that is not complete.

On the league settling the case:

On Zeke Elliott and his playing status:

JL: As of right now, the preliminary injunction is intact and he is clear to play. I am not privy to the schedule of the court of appeals. If they were to say something sometime between now and Sunday, we will announce the decision that might trigger.

If something comes up between Saturday or Sunday, you could still rule him out for the game?

JL: I can't rule out ruling out.

JL: They did an inspection yesterday. At this point I don't think they found any significant damage, but we continue to talk with the Mexican government and the local authorities in Mexico City to both try and understand how we can help in this terrible situation caused by the earthquake and what issues are raised by the game that is scheduled to be played in November. No decisions on any change in our plans, but we are continuing our conversations.

On the other challenging factors caused by the earthquake:

JL: There are a variety of other issues in Mexico City besides the stadium. The important point for us is to make sure that we do this in coordination with the Mexican government and that the game doesn't cause any ancillary issues for them and their ability to move from the rescue to reconstruction phase of this issue. I can't give a timeline to when I can update you on this because those conversations are continuing.

Check out the NFL Daily Podcast iTunes and Google Play!

On the Social Unity Month proposed by players:

JL: The broad, branded, cause-related months or weeks are things that take years of work. I don't think there will be something along the lines of a 'month' on unity during this season. Commissioner Goodell, Troy Vincent, and some others have been involved in some very constructive conversations with those players and others. Last week the Commissioner spent the day in Philadelphia with Malcolm Jenkins, Torrey Smith, and Chris Long trying to get a better understanding of the work that they are doing in their communities. This is an important and constructive dialogue that is going on, but the practical results of it are too early to tell.

Why would it be too difficult to have the unity month this season?

JL: Some of these initiatives take a long time to put together in terms of working with the clubs and the sponsors. I'm certainly not ruling anything out in terms of working something out for this season, but I don't know if at this point we can do something that parallels the breast cancer research month, or something like that.

Breast Cancer still October, as well as Military Appreciation initiatives – What else is on the docket this season?

JL: We do Military Appreciation, and there's been a shift in our Crucial Catch initiative with breast cancer this year. We've been doing that for nearly a decade, but this year we are shifting to a broader cancer platform because we think that effort was extraordinarily effective in raising awareness for people to go and get checked. We think that this is the appropriate time - and our partners at the American Cancer Society agree - to go and try to expand our efforts to other kinds of cancer, especially the forms of cancer where awareness of screening can really have an impact on when something is caught. That is something that the clubs have some discretion on. There are some clubs that have picked a broad platform and there are clubs that have picked a specific cancer group. That and our Salute to Military are what we have on the docket for now.

Update on the 2018 Draft location?

JL: No update. We have a couple of really strong bids and we are continuing the discussion. It doesn't feel imminent. We are still very much in the timeframe of when we've announced this in the past. It doesn't feel overdue at this point.

Where is the Commissioner going to be this week?

JL: The Commissioner will not be traveling this week. He's got three weekends in a row with the games, but this weekend is a non-travel week.

JL: There are things like pension and some others. I [don't know] had a note on this back when he did commit suicide. I will get back to you.

Is Shayanna Jenkins taking advantage of those benefits?

JL: I don't know. There are some benefits both through the club and the league, but I don't know the answer to that.

Shayanna Jenkins stated publicly in an interview [a while] back that she did not believe Hernandez committed suicide – Does the league have any doubt that his cause of death is being treated as suicide?