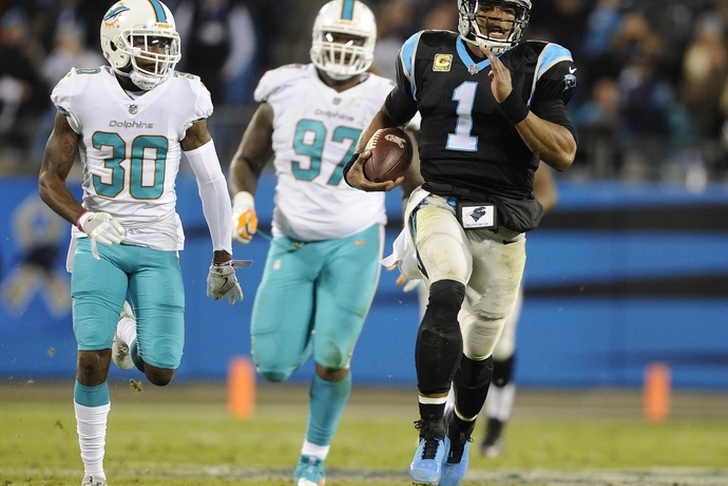 Chat Sports Consensus MVP Power Rankings entering Week 11 of the NFL season. It has been an eventful roller coaster ride of a season and some faces have actually been on this list for most of the season and some find themselves on here for the first time. If you feel like we left off someone either Tweet @MitchellRenz365.

10. Dak Prescott QB - Dallas Cowboys
Prescott goes down the list but doesn't fall off entirely. The Cowboys lost 27-7 to the Atlanta Falcons and if you just look at Prescott's numbers you won't get the full story. The Cowboys missed Tyron Smith and Prescott was sacked a season-high eight times. One bad game for Prescott and the Cowboys isn't enough to move him out of the top 10.

9. Jared Goff QB - Los Angeles Rams
The quarterback to the team that leads the NFL in scoring with 296 points. Goff has taken a huge leap forward in his sophomore season throwing for 16 touchdowns to only four interceptions. The Rams are 7-2 and in first place of their division and a major part is due to the play of their quarterback.

8. Le'Veon Bell RB - Pittsburgh Steelers
Bell only rushed for 80 yards against a poor Colts defense but that had to do more with the Steelers offense than him. A major reason for Bell being on the list is the workload he has been given this season. He is on pace for 462 touches which would be the second most in NFL history. He is the total offense right now for a Steelers team that is 7-2.

7. Russell Wilson QB - Seattle Seahawks
You could argue that Wilson is the most important player to his team in the NFL. He has 19 passing touchdowns this season and is on pace to have a career high in passing yards. Wilson is the leading rusher for the Seahawks and even though he might not be the biggest player, his shoulders probably have to support the most in the league.

6. Cam Newton QB- Carolina Panthers
A huge jump forward for Cam after not being on the list last week. That's what happens when you throw for four touchdowns and rush for 95 yards. His 436 rushing yards is 146 more than the next closest quarterback in terms of rushing yards. The Panthers are 7-3 and playing with a ton of swagger and that's because of their quarterback. Newton is carrying this team that you could argue has one of the worst receiving cores in the entire NFL.

5. Todd Gurley RB - Los Angeles Rams
Gurley joins his quarterback as two Rams make the MVP list and it is well deserved, currently, they are the best quarterback/running back duo in the NFL. Gurley has 10 touchdowns this season which is the most among players who aren't quarterbacks. He has the fourth-most rushing yards (754) and third most receiving yards (406) among running backs. His versatility is a reason why the Rams have been so dominant.

4. Drew Brees QB - New Orleans Saints
The Saints have won seven straight games and sure Brees has only 13 passing touchdowns this season and the running game has been terrific for the Saints. The running game is so good right now though because teams are still respecting the pass because of the respect they have for Brees. His 104 passer rating is the highest it's been since 2013, and he is on pace to set a career high with his current 71.7 completion percentage. The command of the offense and efficiency of Brees is still the reason why the Saints are winning games.

3. Alex Smith QB - Kansas City Chiefs
The Chiefs have lost three of their last four games but that isn't due to the fault of Smith. The Chiefs defense right now is one of the worst defenses in the NFL and really struggling against wide receivers giving up an NFL high 15 touchdowns to wide receivers. Smith has 18 passing touchdowns and only one interception. The fact we are entering Week 11 and he has only one turnover isn't being talked about enough.

2. Tom Brady QB - New England Patriots
Brady leads the NFL in passing yards and the Patriots offense is playing well and many Patriots fans will be upset with him being ranked two. Brady has 2,807 passing yards this season and has this Patriots team looking like one of if not the best offenses in the NFL. Brady may be the best quarterback in the NFL but he isn't deserving of the MVP right now.

1. Carson Wentz QB - Philadelphia Eagles
Just because he was on a bye last week doesn't mean he doesn't deserve to be number one. The Eagles have the best record in the NFL at 8-1, Wentz leads the NFL in passing touchdowns with 23 and has the sixth most rushing yards among quarterbacks. He has the Eagles flying high and for this reason, he is the MVP right now in the NFL.

If you want to hear more MVP talk, luckily for you Tom Downey and Mitchell Renz talk about MVPs and much more on The Fantasy Football Rumors Podcast.