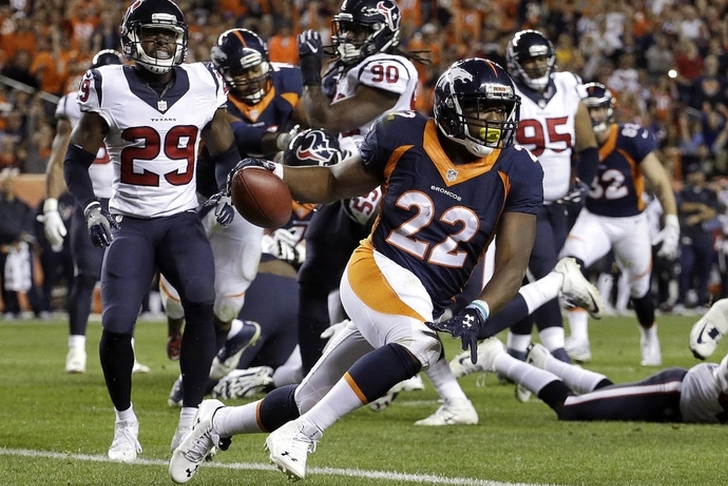 The NFL season is nearing its midway point, and as teams prepare for their Week 8 games this weekend, some are dealing with a few notable injuries - while others could see a return from key players. Here are all the latest NFL news and rumors you need to know:

Anderson to return sooner than expected?
Denver Broncos running back C.J. Anderson underwent surgery to repair a partially torn meniscus on Thursday, and it was thought that it could end his season. However, the Broncos received good news after the surgery. The injury was far less severe than originally thought and he could return as soon as four weeks, according to ESPN's Adam Schefter.

McCoy unlikely to play Sunday
Buffalo Bills running back LeSean McCoy had limited playing time in their loss to the Dolphins last weekend due to a hamstring strain, and that injury may keep him from playing on Sunday against the New England Patriots, according to ESPN's Mike Rodak:

Buffalo Bills running back LeSean McCoy(hamstring) is listed as doubtful to play Sunday against the New England Patriots.

"He never practiced this week, so you guys can figure that out," coach Rex Ryan said after Friday's practice.

Backup Mike Gillislee is expected to start if McCoy cannot play. The Bills listed Gillislee as questionable on their Friday injury report after he was limited in practice with a toe injury.

McCoy had eight carries for 11 yards against the Dolphins, giving him 598 yards and six touchdowns on 112 carries this season.

McCown to start Sunday
The Cleveland Browns have been dealing with a rotation at quarterback due to injury, but now, their due to get one of their better players back. The team announced that Josh McCown will be the starter this weekend:

QB Josh McCown will be the starter this Sunday.#NYJvsCLE

McCown suffered a collarbone injury in Week 2, and that has kept him out for five weeks. After starting the season as the backup, McCown has passed for 260 yards, two touchdowns and two interceptions this season.

Rookie Cody Kessler, who has been the team's starter following Robert Griffin III and McCown's injuries, is still in concussion protocol after suffering the injury against the Bengals last weekend.