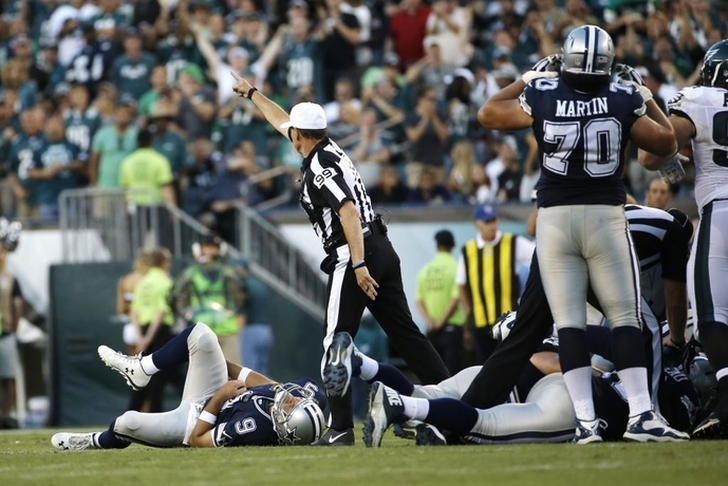 As is the case with every week of the NFL history, Week 2 saw plenty of major injuries spread out amongst the league's 32 teams. Our injury news & rumors roundup starts for this week's action opens with a HUGE injury out of Dallas... 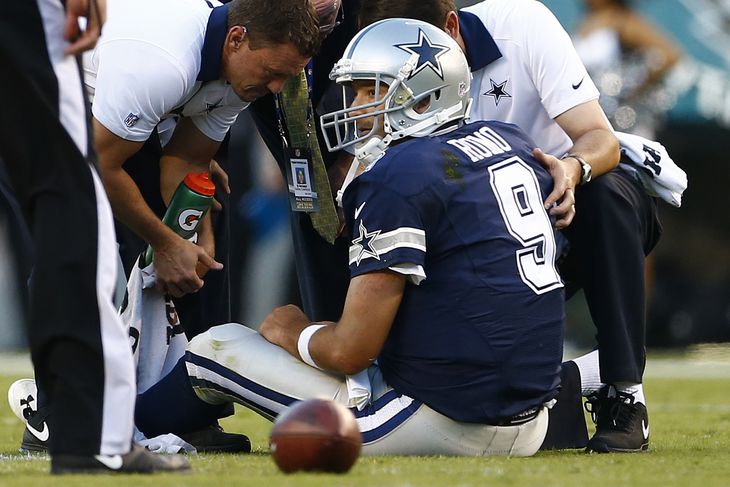 The star Dallas Cowboys quarterback broke his left clavicle on a hit by Philadelphia Eagles LB Jordan Hicks on Sunday. Initial media reports have Romo's projected recovery time in the eight-week range. Former Cleveland Browns QB Brandon Weeden is now the penciled-in starter for the Cowboys, unless they decide to go another route and add a quarterback to the roster.

Romo sat out the final 10 games of the 2010 regular season with a similar injury.

Another QB who hit the shelf in the middle of Sunday's action, the Bears starter injured his hamstring after an ill-advised tackle attempt:

DEVELOPING: Jay Cutler headed to the locker room after attempting to make a tackle after throwing a pick 6. pic.twitter.com/9w9LiI1IQ4

There will be no concrete return timetable for Cutler's injury until further evaluation of the injury takes place early in the coming week.

The Bills safety left Sunday's game in the third quarter with a neck injury that he suffered while trying to tackle Julian Edelman of the Patriots. He was immobilized and taken off the field on a stretcher after the incident. Mike Rodak of ESPN reports that Williams was released from the hospital later in the day, but we have no official word on just what the battery of tests done on Williams concluded.

Rumors surfaced prior to Sunday's Cowboys/Eagles game regarding Dez Bryant's foot injury, positing that he could be out 10-12 weeks -- a far cry from the day-to-day listing on the NFL's official injury report.

Bryant took to Twitter on Sunday to put a firm full stop to those rumors:

Packers RB Eddie Lacy was carted off the field in the first quarter of Green Bay's Sunday Night clash against the Seahawks with an apparent ankle injury...Per the Colts' official website, Indy head coach Chuck Pagano is optimistic that WR TY Hilton will suit up for Monday night's game against the Jets.

Dolphins RB Lamar Miller says he'll be good to go for Week 3 despite not returning against the Jags due to an ankle injury suffered in the team's 23-20 loss...Saints QB Drew Brees told reporters that his shoulder was affected by a hit he took in Sunday's loss to Buccaneers, but he "absolutely" did not entertain the thought of leaving the game, per an ESPN report.

Giants CB Dominique Rodgers-Cromartie returned to Sunday's game agains the Falcons after suffering a stinger on the game's first series. He later was diagnosed with a concussion and taken out of the game. He joins teammate Ereck Flowers (reinjured ankle) on the injury list...Steelers LB Ryan Shazier was held out of Sunday's win over the 49ers with a shoulder injury. He's questionable for Week 4.

49ers RB Carlos Hyde passed concussion tests after a big hit suffered against the Steelers. He was held out for precautionary reasons, but should be ready to go next week...Bucs WR Mike Evans was limited on Sunday with a hamstring injury. He did not record a catch in the team's win over the Saints...The Panthers were worried that an ankle injury sustained by WR Jerricho Cotchery would place another Panthers wideout on the shelf (see: Kelvin Benjamin). He returned to the game, however, and seemed relatively non-affected.