NFL Final: Everything You Need To Know From Week 17 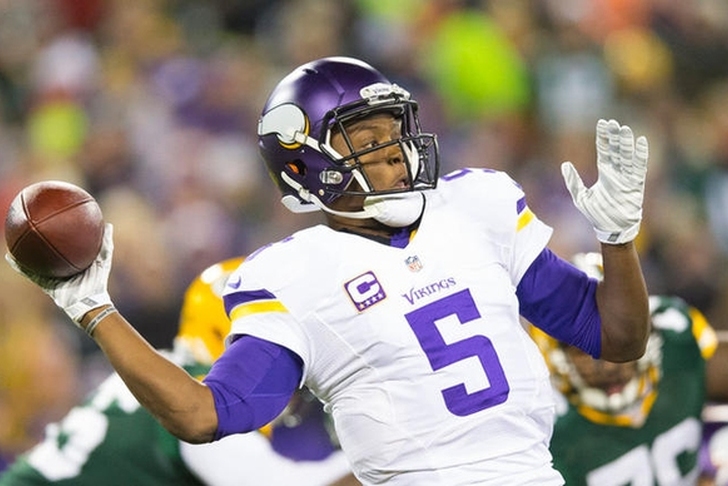 The 2015 NFL regular season is officially over, and there's plenty to cover with the playoff matchups now set in stone and the NFL head coaching carousel already starting to spin. Here's our NFL Final: Everything You Need To Know From Week 17.

The Minnesota Vikings came into Lambeau in Week 17 with a chance at unseating the Green Bay Packers in the NFC North and establishing themselves as the young, new power of the division.

They did just that.

Staking themselves to a 20-3 lead in front of what was an eerily quiet crowd for a good portion of the first three quarters, the Vikings (11-5) staved off a late rally by the Packers -- ultimately sealing a 20-13 win partially in thanks to cornerback Xavier Rhodes' interception of Aaron Rodgers in the end zone on a fourth and goal deep in Vikings territory.

Rodgers would get one more shot with just over a minute left close to midfield, but the drive ended on a missed connection with WR James Jones. The Minnesota Vikings clinch the #3 seed and will host the Seattle Seahawks (more on them later) in a Wild Card showdown next week. Green Bay falls to the #5 seed and will travel to D.C to face a Washington Redskins (9-7) team that looked great on offense in a 34-23 tune-up win over the Dallas Cowboys (4-12)

The Jets Are Out, The Steelers Are In New York Jets (10-6) quarterback Ryan Fitzpatrick has been a revelation for the team are year long, but his old turnover bug started biting at the wrong time in the team's 22-17 road loss to the Buffalo Bills (8-8) on Sunday. Fitzpatrick threw interceptions on each of the team's last three possessions, sealing the deal and ultimately ousting the team from the playoffs with the Pittsburgh Steelers' 28-12 win over the Cleveland Browns.

The Steelers (10-6) ran for just 30 yards against Cleveland (3-13), but once again rode Ben Roethlisberger's arm (349 yards, 3 TD, 2 INT) to an easy win over their rivals from Ohio. The Browns secured the #2 pick in the 2016 NFL Draft with the loss, while the Steelers clinched the #6 seed and a road date with the AFC North champion Cincinnati Bengals next week.

Cincinnati (12-4) clinched the #3 seed in the AFC with a 24-16 win over a Baltimore Ravens (5-11) team which threw it 56 times with Ryan Mallett under center. The Bengals are optimistic that starting quarterback Andy Dalton will be back from a thumb injury for next week's showdown against Pittsburgh. Speaking of the Browns, they cleaned house on Sunday night by relieving head coach Mike Pettine and general manager Ray Farmer of their duties. Both came under intense scrutiny this season with a litany of on- and off-the-field dominating the headlines on a depressing march to a 3-13 record.

The team may also be done with quarterback Johnny Manziel after he reportedly went AWOL and missed a meeting with team doctors on Sunday.

Pettine and Farmer join Jim Tomsula on the unemployment line, after the longtime 49ers defensive assistant was let go by San Francisco after just one full season as head coach. Tomsula spent nine years with the organization, but he ultimately was held accountable for a 5-11 campaign that saw the team regress on both offense and defense. He did go out a winner, however, as the 49ers (5-11) outlasted the St. Louis Rams (7-9) in an ugly overtime win, 19-16, by The Bay.

The Indianapolis Colts took care of business in a 30-24 win over the Tennessee Titans on Sunday, but the team's nine-game parlay to win the AFC South at 8-8 didn't bear fruit.

Indy was technically eliminated before the Houston Texans (9-7) finished a thorough 30-6 thrashing of the Jacksonville Jaguars (5-11) due to tiebreakers, but the dominating offensive/defensive performance by the Texans was a fantastic precursor for the team in advance of next week's Wild Card game at home against the Kansas City Chiefs.

On a side note: with their loss to the Colts, the Tennessee Titans have clinched the #1 pick in the 2016 NFL Draft.

Speaking Of The Chiefs... Kansas City (11-5) ends the season on a ten-game winning streak after holding off the Oakland Raiders 23-17 at Arrowhead. Kansas City held Oakland (7-9) to just a field goal on offense until the final minutes, offsetting an uneven performance on offense.

The win wasn't enough for the team to take the AFC West, however, as Peyton Manning returned to take his starting spot back from Brock Osweiler in a thrilling 27-20 Denver Broncos (12-4) win over the San Diego Chargers (4-12) at home. Manning went just 5 of 9 for 66 yards, but the offense looked much crisper with him under center late than it did while turning the ball over five times with Osweiler on the field.

Denver clinches the #1 overall seed and home-field advantage throughout the AFC Playoffs by virtue of the New England Patriots' deflating 20-10 loss at the Miami Dolphins (6-10). The Patriots offense looked sluggish all day long as New England (12-4) fell to the #2 seed. They'll still get a bye, but they'll have to travel to Denver if the teams get through to the AFC Championship Game.

The Carolina Panthers and Arizona Cardinals headed into their late games on Sunday in competition for the #1 seed in the NFC. By the end of both games, Cardinals QB Carson Palmer was on the sidelines and Carolina QB Cam Newton was polishing off another MVP performance.

Arizona fell behind big to the playoff-bound Seattle Seahawks (10-6), never recovering and ultimately resting Carson Palmer down the stretch in a 36-6 blowout home loss. Carolina is the #1 seed at 15-1, what Arizona also gets a bye with the #2 seed at 13-3.

The Rest Of The Slate

Five games on Sunday had no playoff implications aside from tiebreakers for other playoff-bound teams, one of those being the 49ers' victory over the Rams and the other being Washington's win over the Cowboys. The New Orleans Saints (7-9) clipped the Atlanta Falcons (8-8) 20-17 thanks to a Jamarca Sanford interception which set up a game-winning Kai Forbath field goal with time expiring.

The Philadelphia Eagles (7-9) spoiled what could be Tom Coughlin's final game as New York Giants (6-10) head coach, as quarterback Sam Bradford threw for 320 yards, two scores and one interception to give interim coach Pat Shurmur a victory to close out the season.

And finally, the Detroit Lions finish the season winning six of their last eight, taking down the Chicago Bears (6-10) 24-20 in what amounted to a third-place game in the NFC North. Detroit finishes 7-9, but it's unclear whether a hot streak to end the season will be enough to save head coach Jim Caldwell's job.