NFL Final: Everything You Need To Know From Week 9's Action 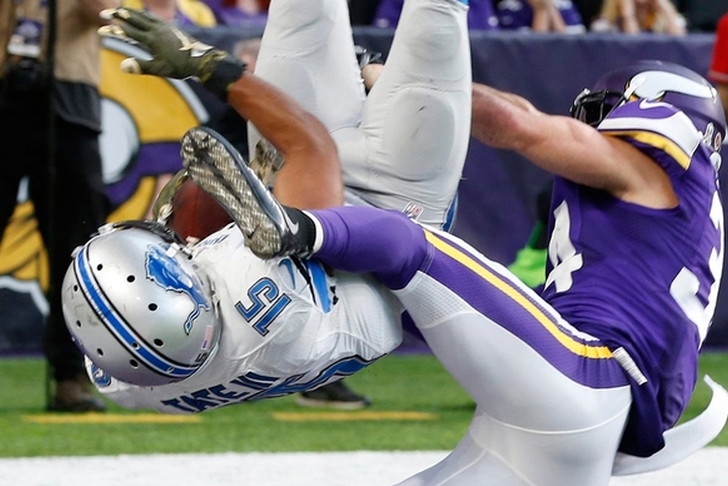 The 2016 NFL season is in full swing, with the bulk of the Week 9 games complete. The season is past its halfway point, and the contenders and pretenders are starting to emerge. With just the Sunday and Monday Night games left, let's get you caught up with what you need to know from Week 9's action with our NFL Final.

Fun Finishes
One of the main reasons NFL ratings are down this year is because of less-than-stellar games. That wasn't the case this week, as multiple games featured thrilling endings. The Dolphins vs. Jets featured a go-ahead drive by both teams in the fourth quarter, Eagles vs. Giants went down to the wire, as did Jaguars vs. Chiefs and Titans vs. Chargers. The game of the day was the Lions-Vikings finished, which featured a 58-yard tying field goal by the Lions as time expired and an insane TD catch by Golden Tate to win the game. You can check out that video below. Heck, even the Saints vs. 49ers and Chargers vs. Titans had tons of scoring and were interesting. The NFL needs more of that the rest of the season.

AFC North Is Getting A Bit Murky
With Ben Roethlisberger back, the Pittsburgh Steelers had a chance to pull away in the AFC North. Instead, they fell to 4-4 as the Baltimore Ravens snapped a four-game losing streak with a needed win. The Steelers have historically played poorly when Big Ben returns from an injury and that was the case this week. The whole AFC North (outside of the terrible Browns) have been inconsistent this year and the division is now totally up for grabs. Both the Ravens and Steelers are 4-4 and the Bengals aren't far behind at 3-4-1. This division could go down to the wire.

NFC North Is Muddled As Well
The Vikings' defense is still strong, but that offensive line is the worst in the NFL that plays East of Seattle. It's cost the Vikings a few heartbreaking losses, but 5-3 is still a strong start for Minnesota. The Lions are 5-4, with every game having been decided by one score or less. They've pulled out a few gutty wins, including a comeback effort against the Vikings. However, I think this team has the makings of a 7-9, 8-8 or 9-7 team. That might not be enough for the playoffs. The Green Bay Packers had a chance to pull even with the Vikings, but they struggled against the Colts. They're now 4-4 and suddenly behind the Lions. This division might not be decided until the final week.

AFC West Is Loaded
The Chiefs won again, improving to 6-2. That's the same record both the Raiders and Broncos have, although they'll play Sunday Night and one will drop to 6-3 (unless we have another tie). But don't forget about the San Diego Chargers, who beat the Titans and are now 4-5 with a better point differential than any team in the AFC South (as well as the Dolphins and Bengals). This is the best division in football.

Cowboys Keep Rolling
The Cowboys game Sunday against the winless Browns was supposed to be a trap game. It didn't turn out that way at all. The Browns kicked a field goal on their opening drive, but the Cowboys scored a TD on their first possession and never looked back. Dallas dropped 35 points in the first three quarters before easing up and cruising to a 35-10 win. The Cowboys look like the best team in the NFC, and who plays at QB might not have much of an effect on that. If there's a team that presents a major threat to Dallas, it's probably the Atlanta Falcons.

Eagles Are Reeling
The Eagles are not playing quality football of late. A 21-10 win over Vikings is wedged between losses to the Lions, Redskins, Cowboys and the Giants. This week's matchup against the Giants was not a great effort. The Eagles had a chance to win this one, but turnovers and failed 4th down efforts killed the Eagles. Philadelphia had three fourth down attempts inside the Giants' 25-yard line. They failed to convert all three and also had a 40-yard field goal blocked. The Eagles are suddenly 4-4 and in last place in the NFC East. Perhaps that impressive start was only a flash in the pan. Carson Wentz looked like a rookie in this one, as he struggled throughout.

Falcons Back On Track
Thursday night games have had a tendency to be a bit screwy and that was the case this Thursday. The Falcons blew out the Bucs 43-28, a score that doesn't really reflect how the game went. The Bucs led 14-13 with four to play in the first half, but the Falcons took control and led 40-14 in the fourth quarter. The Bucs had some garbage time points, but this game belonged to the Falcons. Given the Seahawks and Vikings offensive line issues (and the Packers' general offensive inconsistency), the Falcons look like the No. 2 NFC team. With the Bucs struggling, the Saints' defense a complete mess and the Panthers still several games behind, the NFC South is the Falcons' to lose.

Don't Sleep On The Dolphins
After a 1-4 start, the Dolphins were essentially written off. That appears to have been a mistake, as Adam Gase has turned things around quickly. The running game is finally clicking and the Dolphins have three straights wins, beating the Steelers, Bills and Jets. It's still a long shot with the AFC West playing lights out as a division, but the Dolphins are actually in a decent position to make a run at the playoffs. The Jets, meanwhile, are in a terrible spot at 3-6 after their 27-23 loss to the Dolphins.