NFL Final: Everything You Need To Know From Week 6's Action 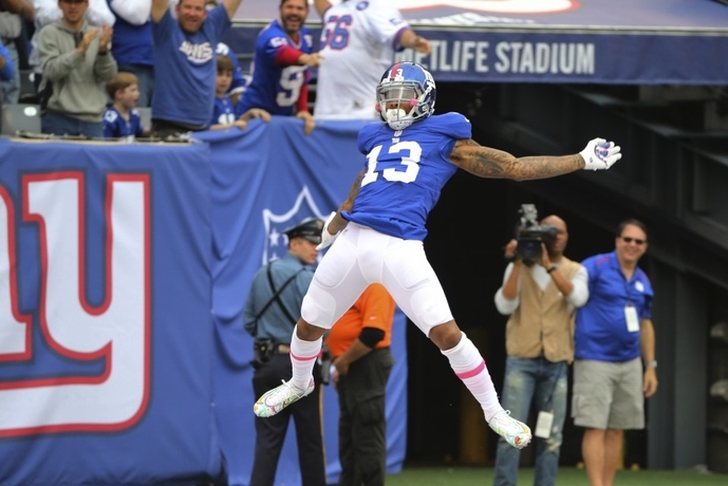 The 2016 NFL season is in full swing, with the bulk of the Week 6 games complete. The season is still nearing its halfway point, and trends are starting to emerge around the NFL. With just the Monday Night game left, let's get you caught up with Week 6's action with our NFL Final.

Texans come back to beat the Colts
Talk about a wide range of emotions for Brock Osweiler and the Texans. The Colts dominated them in Houston for 57 minutes, and Indianapolis looked poised to win with a 23-9 lead. Then, out of nowhere, Osweiler caught fire, leading the Texans back and forcing overtime with two late touchdowns:

In the extra period, Nick Novak kicked the game-winner to give Houston the win. The Texans now lead the AFC South with a 4-2 record, while the Colts dropped to 2-4 on the season.

Odell wins the game for the Giants
The New York Giants and Baltimore Ravens traded the lead back and forth throughout the game, yet the Giants were able to win the game thanks to two HUGE second half touchdowns from Odell Beckham Jr.

New York won 27-23, but more importantly, Beckham made up with - and proposed to - the kicking net that hit him in the face earlier in the season:

Dolphins upset Steelers
The Steelers came into this weekend's matchup as one of the best teams in the league, while Miami came in as one of the worst. With the way this game went, you'd think it was the other way around. Jay Ajayi rushed for over 200 yards and two touchdowns as Miami cruised for the 30-15 win over Pittsburgh.

Panthers drop to 1-5
The reigning NFC champs needed a win to avoid a freefall, but they didn't get the victory they needed. New Orleans quickly took a 21-0 lead in the first quarter, but the Panthers fought all the way back to tie the game in the last two minutes at 38-38.

Unfortunately for them, they left too much time on the clock, as Drew Brees led the Saints down the field for a game-winning field goal in the last 15 seconds, giving New Orleans the 41-38 win.

Titans, Jags get narrow victories
The AFC South may be a dumpster fire, but the Titans and Jaguars picked up narrow wins over the Browns and Bears, respectively. Tennessee held off a Browns comeback for the 28-26 victory, while Jacksonville overcame a 16-7 fourth-quarter deficit to win, 17-7. The Titans are now 3-3 on the season, while the Jaguars won their second straight game to move to 2-3.

Seahawks survive
Seattle and Atlanta met in the marquee game of the afternoon, and it did not disappoint. The Seahawks cruised to a 17-3 lead at halftime, then the Falcons caught fire in the third quarter to put up 21 straight points to take the 24-17 lead.

Seattle looked like they were going to tie the game in the fourth quarter thanks to a one-yard touchdown run from Christine Michael, but the Falcons blocked the extra point, keeping the 24-23 lead. All they had to do was run out the clock, but then this happened.

Julio Jones lets the ball go through his hands...and Earl Thomas picked it off for the #Seahawks! pic.twitter.com/QOGwsuvFJB

Russell Wilson led the Seahawks down the field to kick the game-winning field goal, giving the Seahawks the 26-24 win.