NFL Final: Everything You Need To Know From Week 5's Action 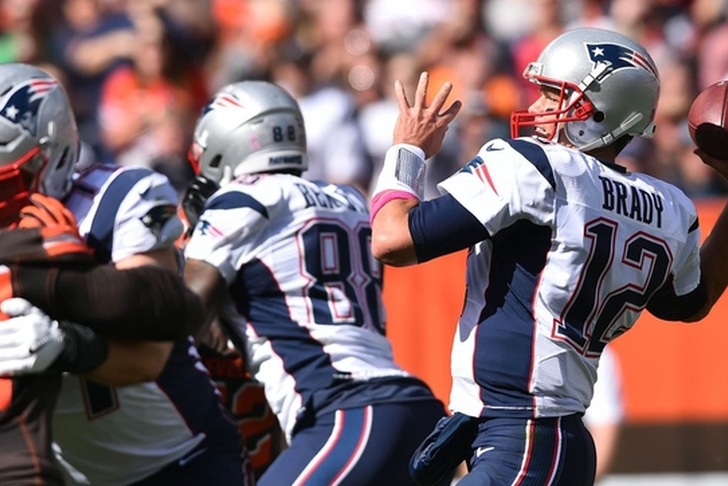 The 2016 NFL season is in full swing, with the bulk of the Week 5 games complete. The season is still young, but trends are starting to emerge around the NFL. With just the Monday Night game left, let's get you caught up with Week 5's action with our NFL Final.

Odell Calmed Down, Packers Still Won
After several games this season that featured Odell Beckham failing to control his emotions, he kept them in check against the Packers Sunday night. Beckham didn't set the world on fire, but played well with five catches for 56 yards and a score. The loss wasn't on him, as the Packers defense shut down Eli Manning and harassed him throughout the night.

That Packers defense is the main reason Green Bay won, as the Giants posted just 43 yards on 15 carries and the Packers recorded four sacks. The offense for Green Bay wasn't great, and Aaron Rodgers was middling at best, but it's a promising sign for the Packers. A strong defense like the one that showed up Sunday night will greatly help their Super Bowl chances.

Injuries
- The Browns lost two QBs this week. Cody Kessler is listed as week-to-week with rib and chest injuries, while Charlie Whitehurst left. On the bright side, Whitehurst did return to take a knee. Kessler's x-rays were negative.
- Steve Smith suffered an ankle injury and didn't return. Pro Football Talk reports Smith won't miss any time.
- Rams CB Trumaine Johnson was carted off with an ankle injury. He didn't return.

That was it for the notable injuries, as it's been a light week on the injury front so far.

Only The Vikings Are Perfect
As everyone expected when Teddy Bridgewater was injured, the Vikings are the last undefeated team standing. They didn't have much trouble with the Texans, who failed to move the ball effectively. The Vikings offense is still not ideal, but that defense might be the league's best. Denver won a Super Bowl last year with a dynamite defense and Minnesota is copying that formula.

Brady's Back
Not that it wasn't expected, but Tom Brady didn't look like he missed four games. Brady had no problem with the Browns, torching them all day through the air to the tune of 406 yards and 3 TDs. His favorite target was Martellus Bennett, who had 3 TDs. But Rob Gronkowski suddenly looked a lot healthier with Brady at QB. Yeah, it's the hapless Browns, but the Pats look dangerous. Very dangerous.

Cowboys And Falcons Look Legit
It wasn't so much Dak Prescott Sunday, but the Cowboys took it to a potential playoff team in the Cincinnati Bengals. Cincinnati made the playoffs last year, but they had zero success against Dallas early. Ezekiel Elliott ran all over and the Cowboys defense put up its best effort in some time. Tony Romo will still be the starting QB for the Cowboys when he's healthy, but the buzz around starting Prescott is going to only grow louder.

The Falcons walked into Denver and handed the defending Super Bowl championship their first loss of the year. If you didn't buy the Falcons before this, you pretty much have to now.

Eagles Come Back To Earth, Lions Are Still Maddening
After a 3-0 start that surprised nearly everyone, the Eagles came back down to earth in Week 5. They lost to the Lions 24-23 thanks in large part to two costly turnovers in the 4th quarter. The Eagles are still in a good position in the NFC East, but the Cowboys and also the Redskins and maybe even the Giants will be threats.

The Lions are still one of the most frustrating teams in the NFL. They beat the Eagles and the Colts, but have lost to the Titans, Packers and Bears. The Lions should be 4-1 or 3-2. Instead, they continue to frustrate their fan base with inconsistent play.

AFC South Is A Mess
Who is actually good in the AFC South? The Jaguars were on bye, but they've struggled this year. The Colts barely got by the Bears and are under .500. The Titans are also 2-3, even after a nice win over a bad Dolphins team. The Texans started the year 2-0, but have since been beaten badly by the Patriots and Vikings. No one in the division has a positive point differential.

AFC Wild Card Will Be Close
There are too many contending teams for not enough spots in the AFC. The Ravens and Bengals despite losses, will be in the mix. The Chiefs could be as well and the Raiders certainly will be after a solid win over the Chargers. The Bills are suddenly 3-2 after beating the Rams and the fighting Rex Ryans could make noise. That's five teams for two spots, so something has to give. If the Bengals and Bills don't get in, they could fire their coach as a result.

Chargers 4th Quarter Woes Strike Again
You've almost got to feel bad for the Chargers. They've blown three fourth quarter leads already this season, and let another chance slip through fingers this week. Literally. The Chargers had a chance to tie it just before the two minute warning, but holder and punter Drew Kaser dropped it. Mike McCoy's seat is getting hot in San Diego.