NFL Final: Everything You Need To Know From Week 3's Action 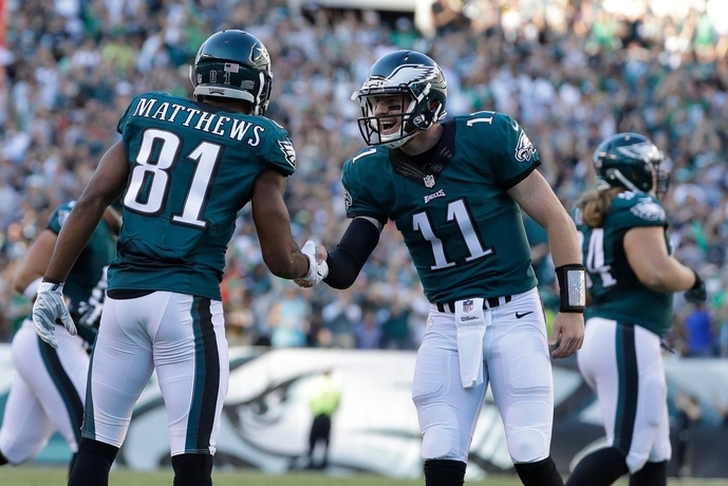 The 2016 NFL season is in full swing, with the bulk of the Week 3 games complete. The season is still young, but patterns are starting to emerge around the NFL. With just the Sunday and Monday Night games left, let's get you caught up with Week 3's action with our NFL Final.

The Eagles Might Be Legit
It was easy to write off the Eagles' first two wins: they played the Browns and the Bears. But this week's win can't be written off in the same manner. The Eagles took it to the Steelers, beating them 34-3. The defense looked unreal and Carson Wentz continues to look like the real deal. The Eagles have the making of an actual playoff threat, although there's still a lot of season left to play. With the Redskins getting by a sloppy Giants team, the Eagles are all alone at the top of the NFC East.

Thriller In Indy
After coming short in fun fashion the first two weeks of the season, the Colts and Andrew Luck finally picked up a win. T.Y. Hilton did most of the work on 63-yard TD catch with 1:17 left. That score gave the Colts a 26-22 lead after they missed the two-point conversion. The Chargers were unable to do what the Lions did in Week 1, as their comeback try was doomed as soon as Hunter Henry fumbled the ball at his own 42.

The Patriots Are Absurd
The Texans were a 2-0 team that went to the playoffs last year. And the New England Patriots just had their way on both sides of the ball Thursday night in a 27-0 demolishing. The Patriots won that game with multiple injuries and with 3rd string rookie QB Jacoby Brissett throwing for 103 yards. Hell, the Texans could barely get the ball past midfield. There are NFL coaches and then there are wizards like Bill Belichick. It's almost not fair.

Turnovers Kill
The Panthers, the Giants, Jaguars, Texans, Chargers and Titans all had three turnovers this week. The Cardinals coughed it up five times and the Jets an unbelievable eight times. All of those teams lost this week. You're not going to win games in the NFL giving it away that often. When the tape is watched later this week, you can bet the coaches are going to emphasis how important holding on to the dang ball is. It cost each of those teams at least a shot at winning this week.

Oh by the way, that Vikings defense is seriously good. It should be enough to carry them to the playoffs. The Cardinals, meanwhile, are having issues figuring out which team will show up each week. And as for the New York Jets, eight turnovers and six interceptions by Ryan Fitzpatrick? Really? C'mon guys.

Seahawks, Packers Offenses Rebound
Both teams had major issues the first two weeks on offense. That wasn't the case in Week 3. The Seahawks cruised to a 37-18 win over the 49ers, while the Packers beat the Lions 34-27. Both passing attacks looked sharp, although there is reason for concern. Russell Wilson injured his other ankle in this one, but did return. He left the game once it was well out of hand, but those injuries for Wilson are starting to add up. As for the Packers, the offense cooled back off in the second half and they nearly blew a 31-3 lead. While things are better than they were just a few days ago for both squads, it's not where it needs to be quite yet.

The Browns Are Still The Browns
The more things change, the more things stay the same. Despite three Miami turnovers, the Browns lost in OT 30-24. The unique partial 2-QB system the Browns ran with Cody Kessler and Terrelle Pryor was pretty good and the defense made a few plays. But newly signed kicker Cody Parkey, who was only just signed, was 3 of 6 on field goals. That included a missed 46-yard as time expired that would have won the game. God hates Cleveland, or at least the Browns.