NFL Final: Everything You Need To Know From Week 1's Action 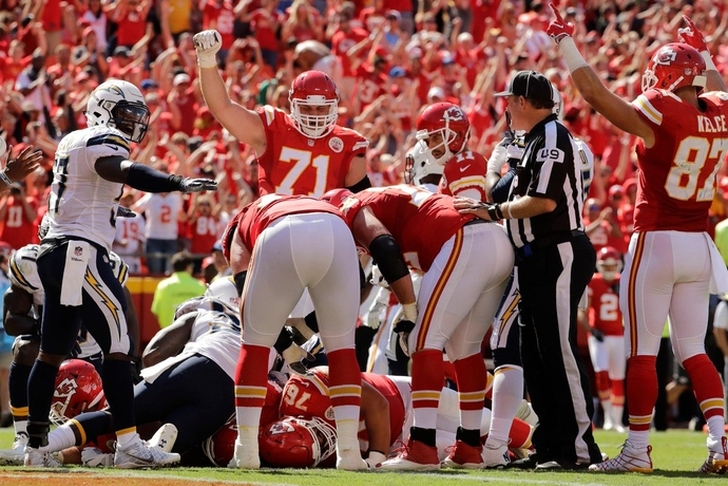 The 2016 NFL season is underway, with the bulk of the Week 1 games complete. While it's too early to declare any definitive statements for the most part, we do have some notable takeaways from the first week of the season. With just the Sunday and Monday Night games left, let's get you caught up with Week 1's action with our NFL Final.

The Chiefs Did A Crazy Thing
The Chargers were up 24-3 with over three minutes to play in the third quarter and it looked the win was in the bag. And then the Chiefs flipped a switch. They rallied to force overtime and then won it on a 2-yard TD run by Alex Smith. It was part great effort by KC and part collapse by San Diego. Alex Smith was spectacular, as was Spencer Ware, who got the start for Jamaal Charles. Even worse than the loss for the Chargers is that WR Keenan Allen is likely out for the season with a knee injury. It's a tough break for the Chargers, Allen and fantasy owners.

Matt Stafford Did It, And Andrew Luck Nearly Did
The final afternoon game of the day, Colts vs. Lions, was a complete thriller. Detroit jumped out to a 21-3 lead late in the second quarter, before the Colts rallied to tie it at 28 in the fourth. The Lions took the lead back with about four minutes to play, but missed the extra point. Andrew Luck then drove the Colts down the field and connected with someone named Jack Doyle for their second TD of the day. With only 37 seconds left, it looked like the Colts were going to win. But, Matthew Stafford took his team 50 yards in 33 seconds, and Matt Prater hit a 43-yarder to deliver a win. Calvin Johnson who?

Black Jack Del Rio
The Raiders beat the Saints, and it's thanks in large part to a gutsy call from head coach Jack Del Rio. The Raiders, who were down 24-13 in the fourth quarter, were down 1 with 47 seconds left. Instead of kicking the extra point and heading to overtime, the Raiders went for two and converted. Perhaps Del Rio didn't want to face Brees and the Saints' offense in OT on the road. The Saints nearly won it anyway, but a 61-yarder from Wil Lutz went wide. We've got Riverboat Ron Rivera in Carolina and now there's Black Jack Del Rio in Oakland.

Vikings Defense Carries Minnesota
Offense? Who needs offense when you've got the Vikings defense? Shaun Hill got the start at QB for the Vikings and the Titans completely shut down the run, limiting Adrian Peterson to just 31 yards on the ground. Hill wasn't great either and the Vikings had zero offensive scores. But the defense provided two, and coupled with four Blair Walsh field goals, Minnesota beat the Titans 25-16. The run-heavy Titans attack didn't happen, with just 22 carries for 64 yards.

Offensive Issues For The Seahawks, Browns And Bears
These weren't the only teams with offensive problems, but they are three we're going to highlight. Starting with the Bears, they mustered just 14 points against the Texans. Houston's defense is good, but the Bears should be able to muster more than 258 yards of offense. Perhaps the team is really going to miss Adam Gase.

The Browns, meanwhile, had nothing going against the Eagles. Robert Griffin III struggled, completing just 12 of 26 passes for 190 yards and an INT. On the bright side, they did have 120 yards on the ground. It looks like a long year for the Browns.

I've said for weeks that the Seahawks' offensive line could hold this team back. That was the case week one against the Dolphins. Russell Wilson injured his ankle and although he stayed in and won the game, he was clearly not 100 percent. The Seahawks put up only 12 points against the Dolphins, as Wilson had limited time in the pocket and the ground wasn't great. The team averaged just 3.5 yards per carry. The Seahawks are loaded across the board, but the offensive line is a serious issue.

Carson Wentz, Dak Prescott Show Promise (For Now)
Both the performances of Prescott and Wentz come with a caveat, but we'll get to that later. Wentz looked pretty damn good against the Browns, completing 22 of 37 passes for 278 yards and two scores. Both his TD passes were things of beauty.

Prescott wasn't as impressive and he came back down to earth after an absurd preseason. He was 25 of 45 for 227 yards, although he didn't have a TD. He failed to get the ball to Dez Bryant either, although of his TD catches was waived off. He looked like a rookie, but a decent rookie. Maybe the game and narrative changes if Terrance Williams gets out of bounds like he's supposed to.

However, teams now have tape of both Prescott and Wentz and it's not like the Browns and Giants feature the best defenses in the league. They both need to keep developing, because opposing teams will modify game plans to force them into mistakes.

Bengals, Giants And Packers Hold On
It wasn't always pretty, but the Bengals, Giants and Packers picked up wins. The Bengals used a late field goal against the Jets to get theirs, a promising sign for a team that lost quite a bit on offense. It's a tough loss for the Jets, who face a hellish schedule to start the year. I mentioned the Giants above, and they had passing TDs to three players not named Odell Beckham. Perhaps they'll be a threat in the NFC East this year. The Packers offense wasn't as good as they need it to be, but it was enough for the win. The Jaguars wanted to announce themselves as a real playoff threat this year, but missed a chance against the Packers. The Jags had nothing going on the ground.