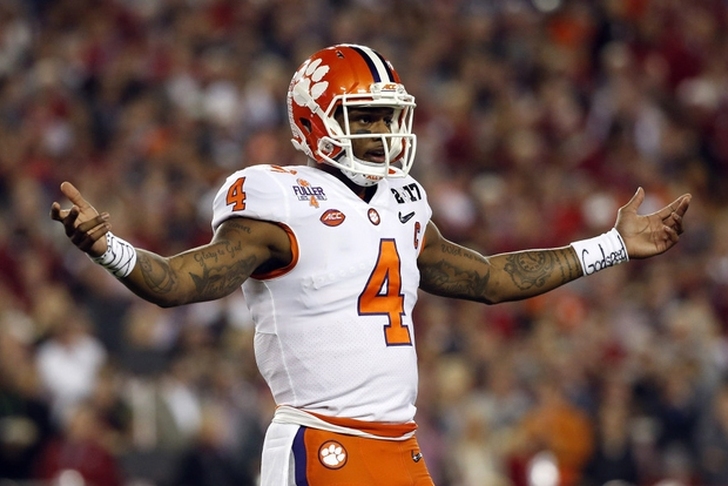 We are still three months away from the 2017 NFL Draft (April 27-29), but as the NFL Combine and pro days approach, rumors are already flying about which teams are interested in which prospects and whose draft stock is rising or falling. Here are all the latest draft rumors you need to know:

Watson avoiding Browns?
Clemson Tigers quarterback Deshaun Watson is one of three quarterbacks (along with UNC's Mitch Trubisky and Notre Dame's DeShone Kizer) that are expected to be drafted in the first round, but Watson is already trying to avoid being picked by a certain team. According to The MMQB's Peter King, Watson declined an invitation to the Senior Bowl - even though the Cleveland Browns talked to him about playing in the game.

Quarterback Deshaun Watson is skipping the Senior Bowl this week. Clemson’s Watson would logically have played for the South team, which will be coached by Hue Jackson and his Cleveland Browns assistants. If you’ve got faith in your ability, and you want to convince the coach of the team with the first pick in the draft—the team that desperately needs a quarterback and will almost certainly choose one high in the draft if it can’t trade for one or sign one before that—why would you not take the golden opportunity to work with Jackson for a week? The other two prime quarterbacks in the draft, Mitch Trubisky and DeShone Kizer, were not eligible, either because they weren’t seniors or because they hadn’t graduated. A couple of notes about the Watson miss, including a clarification I want to add from my post of this note Monday morning: I said the Browns talked to him and asked Watson to play this week. The Browns did talk to him, but the team says it did not urge Watson to play. In any case, Watson decided to not play.

Watson's college coach Dabo Swinney came out in defense of Watson on Tuesday, advocating that the Browns should  make Watson the No. 1 overall pick.

"He's humble, the same guy every day, and always ready," Swinney said. "He comes to every meeting prepared. That's how you change things, you change the culture, through -- for me it's through discipline and recruiting, staffing and all that stuff. For them, it's decision-making, it's who you pick. And I'm just telling you: They pass on Deshaun Watson, they're passing on Michael Jordan. I mean, I don't know what the heck I'm talking about, I'm just an old funky college coach, but Deshaun Watson is the best, by a long shot."

Bears targeting Allen?
Many have pegged the Chicago Bears as taking a quarterback with the No. 3 overall pick in the draft given their plans to part ways with Jay Cutler, but that may not be the case. According to WalterFootball.com, the Bears are hoping that Alabama Crimson Tide defensive lineman Jonathan Allen is still on the board.

Malik Hooker and Jamal Adams are options for the Bears at No. 3, but Jonathan Allen figures to be the best player available. Chicago may have to find a new cornerback or safety in Round 2 if it can't sign players at the position in free agency.

Allen had 69 tackles, 16 tackles for loss, 10.5 sacks, three fumble recoveries and one interception this past season. He also returned the interception and one fumble for a touchdown.

Kelly hoping to participate in NFL Combine
Ole Miss Rebels quarterback Chad Kelly had his season cut short after suffering a torn ACL, but he said his rehab is going so well that he plans to participate fully in the NFL Combine, according to Chase Goodbread of NFL.com:

Ole Miss QB Chad Kelly told me rehab has gone well enough that he might fully participate in combine. If not, pro day for sure.#seniorbowl pic.twitter.com/OhpxNx3jpu

Kelly passed for 2.758 yards with 19 touchdowns and eight interceptions while rushing for 332 yards and five touchdowns in nine games last season. He is projected to be a sixth or seventh round pick.