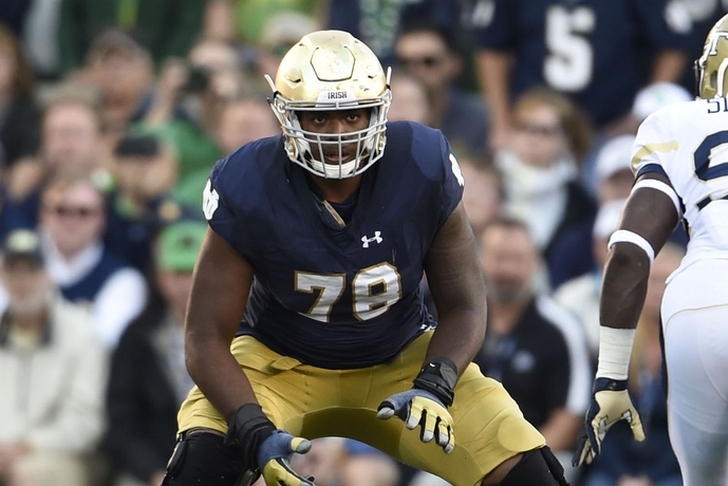 The NFL Draft kicks off tonight with the first round, and rumors are flying as to who will go where, along with some potential trades and late risers & fallers. Check out all the latest news and rumors leading up to the draft below:

Goff to go No. 1, Wentz to go No. 2
The Los Angeles Rams traded for the top pick and the Philadelphia Eagles traded for the No. 2 pick to draft quarterbacks, and we know Cal's Jared Goff and North Dakota State's Carson Wentz will be taken with those picks - but in which order?

According to Fox Sports' Colin Cowherd, the Rams are "100 percent" drafting Goff with the top pick. NFL Network's Mike Silver is also reporting that the Rams will take Goff, a decision they made in February after he had a terrific work out for them in a rainstorm.

Silver says that the Rams made the trade specifically for Goff, meaning the Eagles will be getting Carson Wentz with the No. 2 pick.

It had been believed that, with the third pick in the draft, the Chargers would be taking tackle Laremy Tunsil or a defensive player (likely Jalen Ramsey). Word is getting around that the Chargers may be drafting Stanley, with NFL Network’s Mike Mayock projecting Stanley to San Diego at No. 3 in Mayock’s one and only mock draft.

Stanley is regarded as being the safer pick than Tunsil, and it’s possible that the news of a re-filed assault lawsuit against Tunsil by his stepfather was a factor in San Diego’s final decision. If the Chargers have indeed made a final decision to take Stanley.

Myles Jack to drop out of the Top 10?
The issues around UCLA LB Myles Jack's knee have yet to be settled. Some teams have pulled him off their main draft board because of that injury and there's speculation that Jack could fall out of the Top 10, according to NFL Network's Mike Mayock.

However, teams like the Jaguars, 49ers, Browns and Giants could all take Jack in the Top 10. How far Jack actually falls will be a key storyline and will have major ramifications on the rest of the draft.

Leonard Floyd a Top 10 pick?
In a deep class for defensive lineman and pass rushers, Georgia's Leonard Floyd is emerging as a potential Top 10 pick, according to NFL Network's Ian Rapoport.

Player who is rising & appears headed inside the top 10: #UGA LB Leonard Floyd. Teams caught a small glimpse of his skill set in college

Floyd has great pass rushing ability, and has actually been mocked to teams like the Bucs and Giants well before Rapoport's tweet. While Floyd needs to bulk up, it seems likely that he'll be a Top 15 selection. Two other defensive linemen that could go earlier than expected are Sheldon Rankins and Chris Jones, reports Tony Pauline.