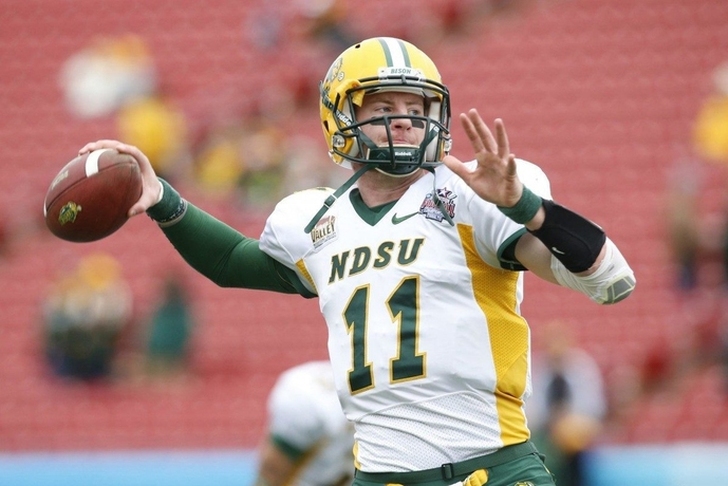 The NFL season is nearly over, with just the Super Bowl left. For the 30 teams that are not still playing, the focus has turned to the offseason. Free agency and the NFL Draft are the main priorities, especially with the Senior Bowl already underway. With that in mind, we've compiled the most interesting tidbits from around the NFL as the draft approaches.

Could The Cowboys Take Wentz?
The Dallas Cowboys are searching for a better backup to Tony Romo, and they might elect to take a QB early in the draft this season. Picking No. 4 overall, the Cowboys might not have a chance to take a QB this early for several years. One of the options could be the fast-rising Carson Wentz. He has everything teams search for in a QB, but played his college ball at North Dakota State. He's an unknown, but the Cowboys are getting up-close look at Wentz. The Cowboys' coaching staff is coaching the North team that Wentz is on in the Senior Bowl.

"I thought he was outstanding," Cowboys executive vice president Stephen Jones said. "Obviously one of the things they're doing too is serving them up quick, there's a lot of pressure, but hell of a job."

Jones is more involved than ever in the decision-making for the Cowboys. It's still early, but the Dallas Morning News does believe that Wentz could go to the Cowboys at No. 4. If Wentz continues to perform well at the Senior Bowl, he might be linked to Dallas even more. Download the Chat Sports Android and iPhone app for more Cowboys draft rumors.

Browns Won't Trade Up
This really shouldn't come as much of a surprise, but the Cleveland Browns don't expect to trade up in the NFL Draft. The Browns have the No. 2 overall pick.

Head of football ops Sashi Brown said it would be "shocking" if the #Browns traded up to No. 1 from 2. "More likely we'd trade down"

The Tennessee Titans have the No. 1 overall pick, and they could look to trade down. A QB-needy team, could look to jump the Browns and snag a QB. The Chat Sports Android and iPhone app has more Browns rumors.

Braxton Miller Shining At Senior Bowl?
Before this season, Miller played QB for Ohio State. He moved to WR this year, and showed promise. His raw talent is showing up at the Senior Bowl.

Braxton Miller/WR/OSU just continues to impress. Looks like he's been playing WR his whole life. Another WOW day for Miller.

Jaylon Smith Injury Update
The star Notre Dame linebacker blew out his knee in the team's bowl game, which could result in a drop on Draft day. Tony Pauline has an update on the recovery time of Smith.

I'm told the hopes are Jaylon Smith's recovery time line will run parallel Cedric Oghuehi's, who was ready midway through the season.

Pauline means Cedric Ogbuehi, the Texas A&M OT who the Cincinnati Bengals took in the first round. If Smith's recovery time is that short, then he might not end up falling far in the draft. Download the Chat Sports Android and iPhone app for more on Smith.