NFL Draft Rumors: McCaffrey May Be Drafted Before Fournette, Texans Trading Up For QB & More 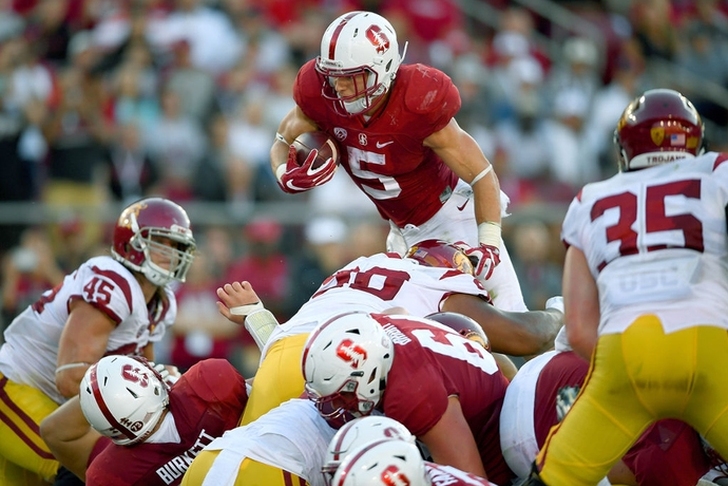 The 2017 NFL Draft is today, and teams are making their final preparations before the first round kicks off tonight. It's silly season, which means there are plenty of draft rumors floating around. Several of those will end up being just smokescreens, but we're here to help you sort through what's real and what's not. Here are all the latest 2017 NFL Draft rumors and news that you need to know from around the league.

Christian McCaffrey to be drafted before Leonard Fournette?
LSU's Leonard Fournette has been thought to be a lock to be the first running back taken in the draft, but that may not be the case anymore. According to NFL Network's Daniel Jeremiah, Stanford's Christian McCaffrey may come off the board first. This is what he had to say when talking about the Carolina Panthers' options with the No. 8 overall pick:

If Leonard Fournette is off the board, I think there's a really strong chance they would select Christian McCaffrey. In fact, I wouldn't be shocked if they took McCaffrey over Fournette if both were available. This seemed crazy a few weeks ago, but that's what I've been hearing lately.

Here's the thing with McCaffrey--even teams with established RB's love him. They can use him so many ways. "He produces points" is the line

The San Francisco 49ers have expressed interest in taking Fournette with the No. 2 overall pick, but Chat Sports projects that he will be the No. 4 pick to the Jacksonville Jaguars. McCaffrey is projected to be the No. 8 overall pick by the Panthers.

Texans trading up to draft a QB?
The Houston Texans have a big need a quarterback after failing to sign a free agent at the position to this point (and because of Tony Romo's retirement), and as such, they are looking to trade up and draft either Texas Tech's Patrick Mahomes or Clemson's Deshaun Watson, according to Charlie Campbell of WalterFootball.com:

...Speaking with sources, I think it is extremely likely that that Texans will move up to get either Texas Tech quarterback Pat Mahomes II or Clemson quarterback Deshaun Watson. I think the slight preference between the two is Mahomes, but both quarterbacks have made a good impression around the league. The key will be if one or both getting past the Saints at pick 11, Browns at 12, and Cardinals at 13. If they do, I think Houston will explore a move up to get one of them. The Texans' need at quarterback is so obvious around the league that teams picking at the top of the second round know they need to jump Houston to get one of those quarterbacks. I don't think the Texans will give up their second-round pick. The third-rounder is probably less likely as well, but they do have two fourth-round selections, and they could look to move up 3-5 spots for one of those picks.

Unfortunately for Houston, Chat Sports does not project either quarterback to be on the board long. Our latest mock draft has the New Orleans Saints picking Watson with the No. 11 pick and the Cleveland Browns taking Mahomes at No. 12.

Steelers targeting DeShone Kizer
Another team looking at the QB position is the Pittsburgh Steelers. They don't have an immediate need at quarterback, but they are interested in drafting a player that can take over the job long-term. Ben Roethlisberger hinted at retirement this offseason and although he's expected to return, the Steelers are keeping an eye out for a potential heir. It's not Landry Jones, despite his re-signing, so they're looking to the draft to find that guy.

As such, they appear to be targeting Notre Dame's DeShone Kizer in the first round, according to Campbell:

In the final days before the draft, WalterFootball.com has learned from team sources that Steelers have been asking around to other teams, trying to gauge where Kizer could be drafted and who could be interested in taking him. Pittsburgh has to start planning for the retirement of Ben Roethlisberger and it sounds as though Kizer is viewed as their developmental starter in waiting while Roethlisberger finishes out his career.

The Steelers have tried to be discrete with their vetting of Kizer with offensive coordinator Todd Haley at the Notre Dame pro day rather than a big contingent of general manager, head coach, and other top executives. However, teams have told WalterFootball.com that Pittsburgh has revealed some nerves about Kizer not getting to their pick as they've asked around the league where he might go and what teams are interested in taking him.

Pittsburgh has been heavily linked to Tennessee QB Joshua Dobbs, but it now appears that Dobbs is simply a backup option if they are unable to land Kizer. He passed for 2,925 yards with 26 touchdowns and nine interceptions while rushing for 472 yards and eight more touchdowns this past season.

Back to the NFL Newsfeed
40 shares Share on FB Share on Twitter
Another NFL article you might like: NFL Rumors: Jamal Adams Trade?, Hunter Henry Latest, Sam Darnold or Lamar Jackson & The Match With Tiger Woods, Phil Mickelson, Peyton Manning and Tom Brady >>