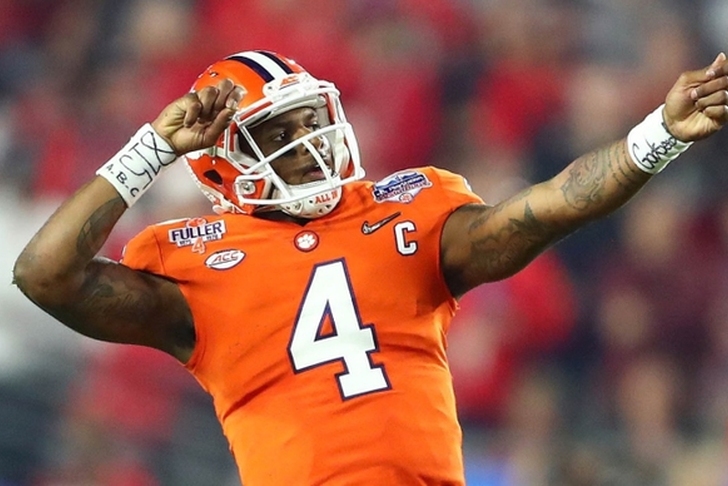 Jaguars interested in Deshaun Watson
The Jacksonville Jaguars haven't decided if they will pick up quarterback Blake Bortles' 2018 option or not, creating a question about his future with the franchise. It looks as if the Jaguars are thinking about going in another direction as they are bringing in Clemson quarterback Deshaun Watson for a two-day visit, according to ESPN's Josina Anderson

I'm told QB Deshaun Watson is scheduled to be with the #Jaguars Apr. 5-6. #NFL

Jacksonville has the No. 4 overall pick in the draft. Watson passed for 4,593 yards with 41 touchdowns and 17 interceptions while rushing for 629 yards and nine touchdowns this past season while leading Clemson to the national championship.

QBs could fall out of the Top 10?
While Watson has been linked to several teams in the top 10 and UNC's Mitchell Trubisky could be taken with the No. 2 overall pick by the San Francisco 49ers, there is a real chance that no quarterback could be drafted in the top 10, according to Will Brinson of CBS Sports.

But if things go sideways because of the defensive talent in this draft, it’s very possible that the four quarterbacks fall out of the top part of the draft and we see them end up with teams who aren’t desperate for starting quarterbacks.

Here’s how it plays out:

- The Browns take Myles Garrett (feels guaranteed at this point).
- The 49ers and Bears take two of Solomon Thomas, Jonathan Allen, Malik Hooker and Jamal Adams, or another defensive player (entirely likely).
- The Jaguars and Titans don’t trade out to someone or don’t draft a quarterback (pretty likely).

And if that all happens, it just comes down to the Jets not seeing a quarterback they want at No. 6. They could see McCown as a bridge for them this season to get to another guy in 2018 while trying to see what Hackenberg can do.

There’s a chance someone else could come flying back up to grab a quarterback, and if all the quarterbacks are available at No. 12, you can feel good assuming that the Browns will pull the trigger, but it’s certainly not guaranteed.

It wouldn’t be hard at all to see the quarterbacks spread out across No. 12 (Trubisky to Cleveland), No. 13 (Mahomes to Arizona), No. 17 (Watson to Washington, followed by a trade of Cousins to San Francisco?!?), No. 25 (Watson to the Texans if he’s there) and No. 27 (Watson, again, to the Chiefs if he falls).

Trubisky is the only quarterback taken in the top 12 in Chat Sports' latest mock draft, with him going No. 6 to the New York Jets.

Dallas to host 2018 draft?
The 2018 NFL Draft is expected to held in Dallas at the Cowboys' training facility, according to ESPN's Field Yates.

Dallas has emerged as a favorite to host the 2018 NFL draft at the Cowboys' new training facility in Frisco, Texas, league sources told ESPN on Wednesday.

Philadelphia is also in contention, while Kansas City and Green Bay are considered long shots. An official decision on the 2018 draft site is not expected to be made until after this year's draft.

But Dallas is pushing to host the draft and has the infrastructure to get it done at The Star -- the Cowboys' new training facility.