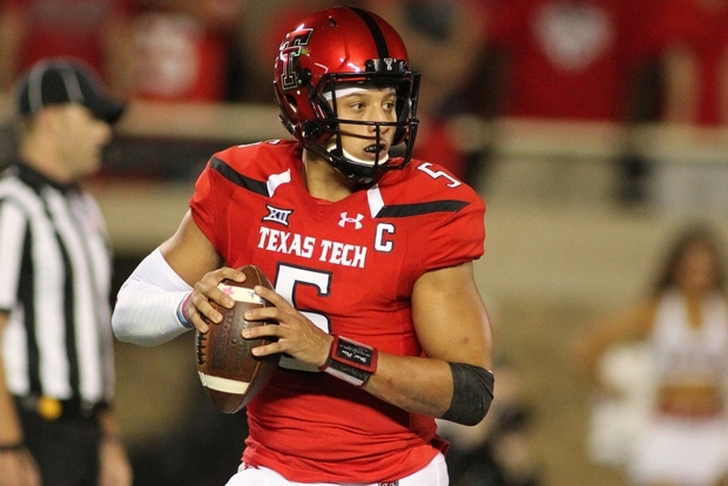 Giants targeting Patrick Mahomes
The New York Giants are looking to draft their eventual replacement for 36-year-old Eli Manning, and Texas Tech's Patrick Mahomes II appears to be one of their top targets, according to Art Stapleton of NorthJersey.com.

The Giants are debating louder internally than they have in a while about finding a quarterback to eventually succeed Eli Manning.

McAdoo has been vocal since taking over as head coach last season that he does not feel the need to attend Pro Days, often reserved for scouts within the organization and front office brass when warranted. So the presence of McAdoo in Texas should, if anything, make a statement about how serious the Giants are in their evaluation of quarterbacks in the NFL Draft, which begins April 27 in Philadelphia.

Mahomes passed for 5,052 yards with 41 touchdowns and 10 interceptions as a junior this past season while rushing for 285 yards and 12 more scores.

Colts looking to trade down in draft
The Indianapolis Colts currently have seven picks in the first five rounds, including the No. 15 overall pick. However, both owner Jim Irsay and general manager Chris Ballard say they would like to trade to trade down to acquire more picks.

“We wouldn’t hesitate to trade down and get a few more picks if we can,” Irsay said at the Annual League Meetings. “That would be something that we think could really benefit us.”

“We won’t be (afraid to trade back)," Ballard echoed, via Colts.com. "We will not be timid about moving around in the draft. Will it happen? I don’t know. There’s some years we said that in Kansas City and we didn’t make one trade. And then last year we beat bopped around a few times in the draft.

"You’ve got to have a partner that’s willing to trade with and you have to be willing to work out the compensation. We are definitely open to trading back in this draft and we have to make sure when we do it, we still have the right players on the board targeted.”

Bucs looking to draft running back
Tampa Bay Buccaneers running back Doug Martin is suspended for the first three games of the 2017 season for violating the league's performance-enhancing drug policy, and while head coach Dirk Koetter said the team still likes Martin and plans to keep him, they could still draft a running back, according to Dave Richard and Jamey Eisenberg of CBS Sports.