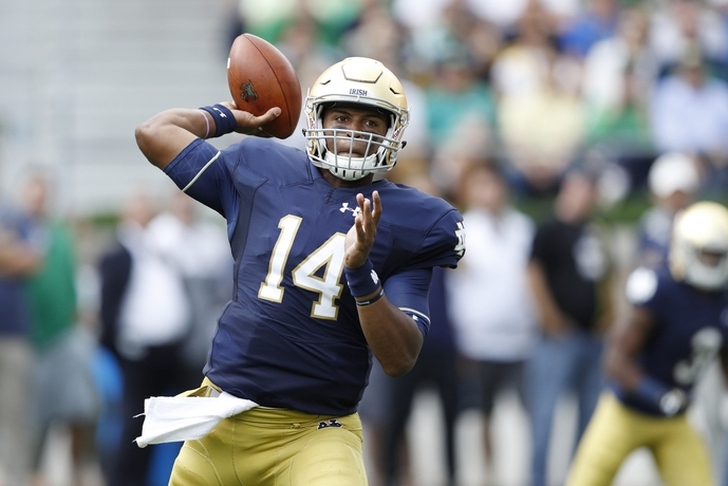 Day 2 of the 2017 NFL Draft is here, with rounds two and three set to start at 7 p.m. ET. The first round is done, but there's still a ton of buzz around which players could go early and what trades could be made. Here are the latest NFL Draft rumors and news you need to know.

Chat Sports will have a live NFL Draft show for round two, which you can view on the Chat Sports NFL Facebook page.

Who Wants DeShone Kizer?
The top QB left on the board is Notre Dame's DeShone Kizer, who slipped out of round one. It appears that several teams are interested in adding Kizer to be their QB of the future. That includes both the Packers and Chargers.

Hearing same as @RapSheet that ND QB DeShone Kizer is "in play" for #Packers at 33. Sounds like GB leveraging options. Could pick and trade.

FYI: Smoke circulating around #NFL that #Chargers like Notre Dame QB DeShone Kizer (#Chargers next pick is at 38)

We'll get to the "leveraging" comment Wood makes next, but the Packers could mimic their Brett Favre move with Aaron Rodgers once again. Taking Kizer in round two would allow a team to sit him for at least a year behind their current starter.

Packers Open To Trading Down
This isn't even a rumor. GM Ted Thompson straight up said the Packers are taking calls for this pick. That interest in moving down could explain why Kizer is "in play" for Packers. What better way to drum up trade interest than to leak that you want the top QB on the board? It worked out perfectly for the 49ers and the Packers could be trying something similar. Adam Schefter has the details on who is trying to move up.

Chargers, Jets and Buccaneers amongst the teams calling Packers, interesting in trading up for top pick in second round, per source.

If the Packers stay put, the top needs they could address are corner, edge rusher and running back. ESPN reports the Packers will take either Kevin King or Dalvin Cook if they don't trade down.

Seahawks Looking At QB?
Russell Wilson isn't going anywhere, but it appears the Seahawks are looking into taking a QB.

.@MoveTheSticks says he's hearing #Seahawks in the mix to draft a quarterback tonight. Seattle has 6 picks in 2nd and 3rd round. #NFLDraft

Apparently, they would have taken Patrick Mahomes if he was on the board for their original first round pick. That wasn't going to happen, but the interest in a young backup QB is real. With so many picks and few needs, the Seahawks can use a luxury pick on a better backup than Trevone Boykin.

As for which RB the Redskins could target, that's unclear. It's a solid crop of RBs, so they could add a Dalvin Cook or Alvin Kamara in round two or wait later for a Brian Hill of Wyoming type.