NFL Draft Rumors: Browns Expected To Take Trubisky With Top Pick, Bucs Want To Trade Down In 1st Round & More 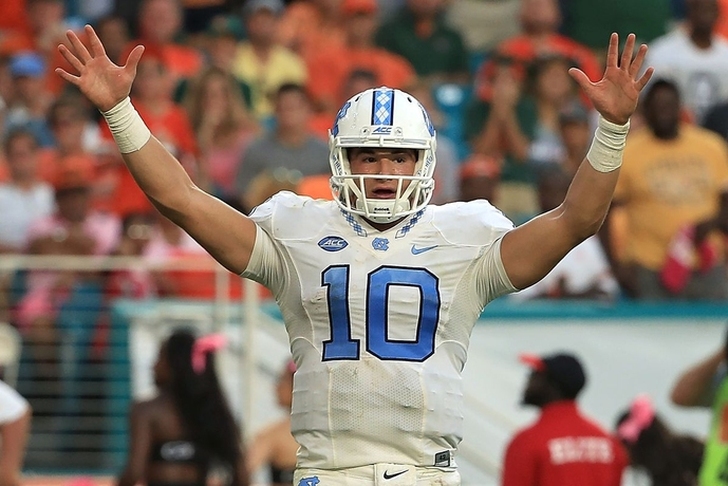 “I continue to hear that Mitchell Trubisky is square in consideration, and may turn out to be the No. 1 pick,” Schefter said. “Now I know everyone thinks Myles Garrett’s going to be the pick, and I will not be surprised if that’s the case tomorrow night. But I have got very smart, very well connected people telling me over the last 24 hours that they think Trubisky’s going to be the No. 1 pick. We’ll see."

The 49ers have expressed interest in drafting Trubisky with the No. 2 pick, as have the Bears with the No. 3 pick. Because of that, the Browns don't think Trubisky will be available outside the top three. Cleveland has talked with several teams at the top of the draft who looking to trade down - especially the Titans at No. 5 and Jets at No. 6 - but they aren't expecting him to be available then.

“I know when people talk about the Tennessee Titans (trading the No. 5 overall pick), they figure that Cleveland’s coming up to go get the quarterback, Mitchell Trubisky, at No. 5,” Schefter said. “My read on the situation is that Cleveland is more apt to just stay exactly where it is.”

Bucs want to trade down in 1st round
The Tampa Bay Buccaneers currently hold the No. 19 overall pick in the draft, but they are looking to trade down form that spot, according to ESPN's Adam Schefter:

Buccaneers are talking with at least three teams about moving back in 1st round, and maybe even out of first round altogether, per source.

Chat Sports has the Bucs drafting Miami tight end David Njoku with the pick in our latest mock draft.

Green Bay targeting Texas Tech QB Patrick Mahomes?
The Green Bay Packers have been linked to Oklahoma running back Joe Mixon in the first round, and there is the possibility that they are looking to trade out of the first round entirely.

They are also reportedly targeting a quarterback at some point in the draft, and it looks like that may be the direction they go with their first round pick - if they can. According to Charlie Campbell of WalterFootball.com, the Packers are targeting Texas Tech quarterback Patrick Mahomes in the first round:

Green Bay is generally a very secretive team, so you can never rule out that the Packers have something else completely different up their sleeve. Some sources say even a quarterback like Texas Tech's Pat Mahomes is in play for Green Bay. He would be a good understudy to Aaron Rodgers. Similar to the Packers' franchise quarterback, Mahomes has a strong arm with mobility, athleticism, and moxie. For the Packers to take Mahomes, the value would have to be right, but Ted Thompson selected Rodgers in the first round with having Brett Favre for years to come, so you can never rule out Thompson looking down the road with Rodgers turning 34 later this year.

However, there isn't much of a chance that Mahomes drops to the Packers at No. 29, and Green Bay hasn't shown an indication that they are willing to trade up in the draft. Chat Sports has Mahomes going No. 12 overall to the Browns in our latest mock draft.