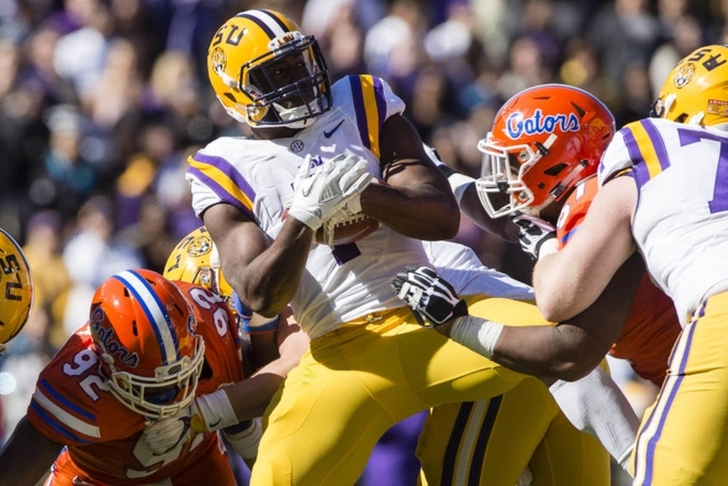 The start of the 2017 NFL Draft is less than three weeks away, and with most of the free agency frenzy over, teams around the league have turned their full attention towards it. Here are all the latest 2017 NFL draft rumors and news you need to know from around the league.

Leonard Fournette An Option For Browns With No. 1 Pick?
It's long been assumed that the Browns would take Texas A&M DE Myles Garrett with the No. 1 overall pick. But CBS Sports' Jason La Canfora reports the Browns are looking at LSU RB Leonard Fournette as well.

"But the more football people I speak to as scouts and executives emerge from their all-day draft meetings is that Fournette could surprise with how high he goes," La Canfora writes. "Some have suggested to me that Fournette is even in play at No. 1 with the Browns. Yes, you read that correctly. I don’t see that happening, and in the end, I suspect the Browns take pass rusher Myles Garrett. But then again, the Browns are capable of some extreme curve balls in that front office and their version of analytics tends to swing outside of convention."

It'd be a major surprise for the Browns to not take Garrett No. 1 overall. That's what the latest Chat Sports mock draft has the Browns doing and pretty much every mock and reporter has the same selection. Also on the Fournette front, the Panthers are bringing him in for a visit Monday.

Mitchell Trubisky A Top 10 Lock?
Sticking with La Canfora, he reports that North Carolina QB Mitchell Trubisky won't last long on draft night. La Canfora reports he won't get past the New York Jets at No. 6 and suggests a team could trade down with the 49ers to jump New York for Trubisky. The latest Chat Sports mock draft also had the Jets taking Trubisky at No. 6 overall. Trubisky also visited with the Buffalo Bills, who are showing serious interest in the QB.

Who Could Take A QB In Round 1?
Staying with the theme of QBs, La Canfora reports several teams could pull the trigger on a QB in round one. And not every team is an expected one.

"Very quietly, the Los Angeles Chargers are doing ample work on quarterbacks and at seventh overall might be more motivated to find a replacement for Philip Rivers than many believe," La Canfora writes. "And the Saints are going to take a quarterback with one of their two first-round picks (No. 11, No. 32) in all likelihood as well. The Cardinals are trying to gauge internally what it might take to move up from No. 13 to get a quarterback -- I continue to hear a strong buzz about them and Watson -- but that price might be prohibitive ... The Texans are drafting a quarterback high -- they have to with an acute, pressing need -- and I don’t think Mahomes gets past them as his floor. The Chiefs are very deep in this as well with Andy Reid quite interested in seeing if one of these kids could be a franchise guy for him down the road while the Saints close the round out with the 32nd pick."

Expect four QBs to go in the first round: Mitchell Trubisky, Deshaun Watson, Patrick Mahomes and DeShone Kizer (in some order). Davis Webb could sneak into that conversation, but it's more likely he goes in round tow.

Dalvin Cook's Off-The-Field Issues And Running Backs This Year
La Canfora also has quite a bit on the running back situation and it's not good news for Florida State's Dalvin Cook.

"The signals I am picking up from scouts on Florida State running back Dalvin Cook are less than stellar, with his character and attitude raising some major red flags," La Canfora reports. "In fact, I wouldn’t be surprised in the least if Stanford’s Christian McCaffrey is the second back selected and goes in the top third of the first round."

La Canfora also said he expects Oklahoma's Joe Mixon to at least go in the second round.