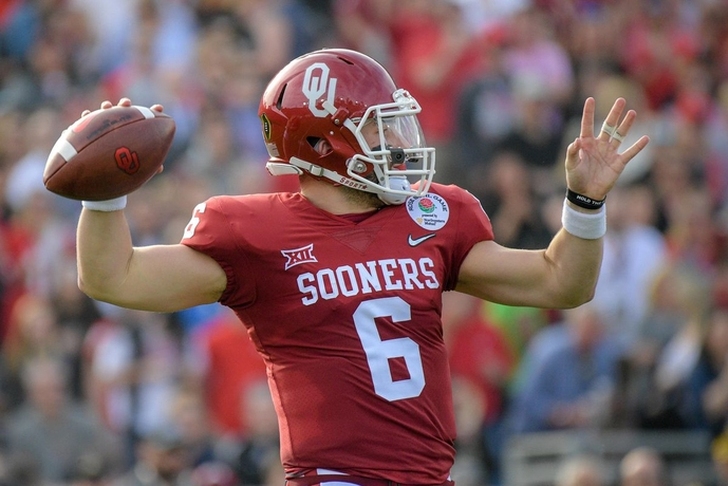 The 2018 NFL Draft is just over a month away, being held at AT&T Stadium from April 26-28. As such, teams are really starting to go through all the prospects and narrow down their top targets, particularly when it comes to the four quarterbacks at the top of the draft. Here are the latest NFL Draft news and rumors you need to know:

Dolphins, Browns, Jets interested in Baker Mayfield
The New York Jets traded up to get the No. 3 pick in the draft in order to take a quarterback, and they will be working out Oklahoma's Baker Mayfield on Saturday, according to Ian Rapoport of the NFL Network. Mayfield is also scheduled to work out with the Cleveland Browns and Miami Dolphins.

Busy week for #OU QB Baker Mayfield: #Dolphins coach Adam Gase is working him out today. #Bills workout was Monday. #Browns is tomorrow and #Jets is Saturday. Many of the QB-needy teams get a look.

Bills interested in Josh Rosen
Mayfield also worked out for the Buffalo Bills on Monday after the team held a workout for UCLA's Josh Rosen on Sunday, according to Bruce Feldman of FOX Sports.

Buffalo is also expected to trade up from their current position with the No. 22 and No. 23 overall picks in order to take a quarterback.

Rosen passed for 3,756 yards with 26 touchdowns and 10 interceptions in 11 games last season.

Bradley Chubb expected to be drafted within top seven overall picks
Many have NC State defensive lineman Bradley Chubb as the highest-rated defensive prospect in this year's draft, but he may be available longer than expected if there's a string of quarterbacks taken at the top of the draft. Still, Chubb is meeting with five teams within the next week - all of whom are picking the top seven - according to Pro Football Talk's Mike Florio.

Chubb’s agent, Erik Burkhardt, tells PFT that the former North Carolina State pass rusher will meet with five teams between Sunday night and Monday morning, in advance of his Pro Day workout in Raleigh. All of the teams with whom Chubb will be meeting currently pick within the top seven of the first round.

Chubb racked up 72 tackles with 23 tackles for loss and 10 sacks last season.