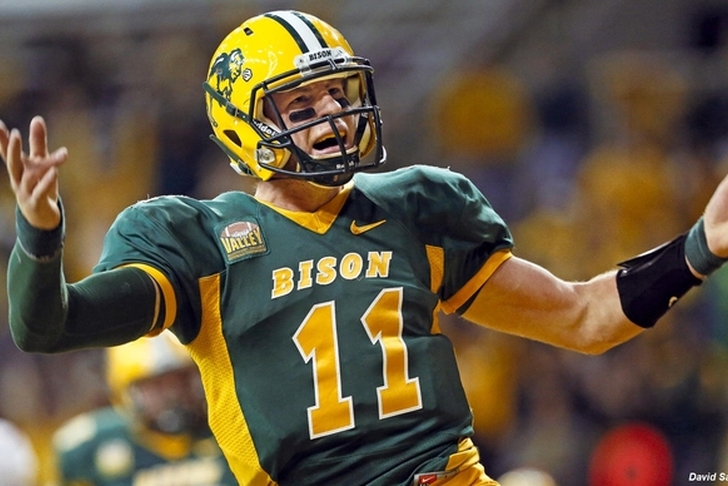 The NFL season is nearly over, with just the Super Bowl left. For the 30 teams that are not still playing, the focus has turned to the offseason. Free agency and the NFL Draft are the main priorities, especially with the Senior Bowl already underway. There are rumors aplenty right now, with many focusing on North Dakota State QB Carson Wentz. The Wentz Hype Train is rapidly gaining speed. With that in mind, we've compiled the most interesting tidbits from around the NFL as the draft approaches.

Jerry Jones Says Cowboys Don't Have To Draft QB
The Dallas Cowboys are in desperate need of a quality backup to star QB Tony Romo. Finding a future franchise QB wouldn't hurt either, and there has been plenty of speculation the Cowboys could use the No. 4 overall pick on a QB. However, owner Jerry Jones says the team doesn't have to spend any draft pick on a QB this season.

"There are many options," Jones said per ESPN. "There's free agency. The question you [asked], and I'm taking it literally, is, Do you have to? Have to do what? Do we have to [draft a quarterback] to compete for a Super Bowl next year? Do we have to to compete for a Super Bowl in the future? Do you have to have it in place after you have this draft? There's no 'have to' here, in my mind, because we have the luxury of having [Tony] Romo for a minimum three, four, five years here. So we're going to play football and hopefully play it well with a healthy Romo."

Jones' comments don't rule out the possibility of the team taking a QB early. In fact, his comments to reporters came after he spoke with Wentz. The FCS QB is playing in the Senior Bowl, with the Cowboys' staff coaching him this week. He could be a top 10 pick and has been linked to the Cowboys. For more on the Cowboys' draft plans, check out the Chat Sports Android and iPhone app.

Jets Thinking QB?
Ryan Fitzpatrick can't play forever and Geno Smith clearly isn't the answer. It's highly unlikely Bryce Petty is either. That means the Jets need a franchise QB and Wentz might be the answer. The Manish Mehta of the New York Daily News thinks the Jets could be interested in the potential Top 10 pick, if he lasts to their pick. The Jets are also looking at nearly every QB in the draft, which could just be their due diligence. Download the Chat Sports Android and iPhone app for more on the Jets' draft plans.

Could The Chargers Take A QB?
The Chargers haven't really been linked to any QBs this offseason, mostly because they just extend the contract of Philip Rivers. However, Campbell reports the Chargers are high on Wentz. The argument for taking Wentz is the same for the Cowboys and Chargers. Taking a QB to groom doesn't really help the team's Super Bowl chances right now, but it would keep the window open for another 10-15 years if Wentz pans out. The Chat Sports Android and iPhone app has more Chargers rumors.

Lions High On Vernon Butler?
There's two different parts to this rumor. The first is NFL.com Draft expert Lance Zierlein has the Lions taking Butler in the first round. The second is Charlie Campbell of Walterfootball.com reporting sources have said the Lions are high on Butler, who is at the Senior Bowl this week. Butler played for Louisiana Tech and a first round project is a surprise at the current moment. A strong senior bowl could help him rise, but the second round still seems more likely for Butler. For more on the Lions, check out the Chat Sports Android and iPhone app.

Bucs Love Jalen Ramsey?
This isn't much of a surprise, but Walterfootball.com reports the Tampa Bay Buccaneers love FSU DB Jalen Ramsey. He's talented and fills a need, but he's also unlikely to last until the Bucs' pick. Ramsey and the Bucs seems like a pipe dream since the team likely won't trade up. Download the Chat Sports Android and iPhone app for more on the Buccaneers.