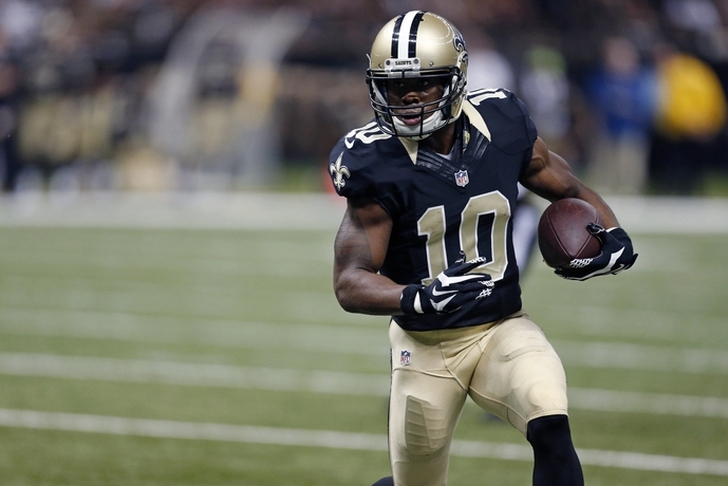 The 2017 NFL Draft Combine is in full swing and will run through Monday, March 6. Today featured quarterbacks, wide receivers and tight ends going through drills and workouts. But the on-field events aren't the only source of news. With all 32 teams and plenty of media members at the Combine, plenty of rumors come out from the Combine. Here's all the latest news and rumors you need to know.

Eagles The Favorite For Brandin Cooks
The Brandin Cooks trade rumors started a few days ago, with the Titans and Eagles the two teams linked. It appears that the Eagles are the current front runner.

I'm told @Eagles likely landing spot for @brandincooks so not sure how that would affect @BMarshall interest https://t.co/zjpvauzFpc

Marvez adds that the Eagles would need to include a 2nd rounder in order to get a deal done. Saints fans want more (and they've made that clear in the replies to Marvez), but Cooks is also due a large extension after next season. That drives down the cost of Cooks. However, Ian Rapoport reports the Saints want a 1st rounder for Cooks, although they might not get that much. Jeff McLane of the Philadelphia Inquirer reports that a 2nd rounder, Day 3 pick and a player (McLane suggests Mychal Kendricks and/or Connor Barwin) might be enough to get a deal done. That sounds a little bit more feasible than a middle first round pick.

Reuben Foster Sent Home
The talented Alabama linebacker is a likely Top 10 pick, but may have had his draft stock take a bit of a hit. He's been sent home following an argument with a hospital worker.

Bama's Reuben Foster, a potential top-10 pick, is being sent home from combine for heated argument with a hospital worker, sources tell ESPN

Several have tried to explain what could have caused the issue with Foster.

Not defending Reuben Foster in @AdamSchefter report but from my experience here if a player is waiting for MRI it can be a very long day.

Schefter also backed that up, with Matt Miller of Bleacher Report adding that interviews were rough for Foster this week. In terms of pure talent, Foster is a Top 5 prospect this year. But his run-in at the Combine could contribute to a slight slide. Still, it'd be a major upset if he fell out of the Top 15, let alone the first round round.

Ross Sets The Combine Record
Chris Johnson no longer has the fastest 40-yard dash time in NFL combine history. It now belongs to John Ross, who posted a blazing 4.22 40. Check it out below.

Now Ross didn't wear Adidas cleats, which means he's not eligible for the Island Adidas promised. Ross ran in Nike shoes, so perhaps Nike can come through with something nice.

Patrick Mahomes Meetings
The Texas Tech QB is one of the more intriguing prospects this year. He might have the highest upside of anyone in this year's class, but also needs plenty of work. Namely, his footwork and adjusting to an NFL scheme after playing in an Air Raid offense. A likely Day 1 or Day 2 pick, several teams are meeting with Mahomes.

Now don't read too much into the Mahomes meetings, as teams try to meet with as many prospects as they can. But, if there's one team that makes you go "hmm," it's the Redskins. They have Kirk Cousins, but he's been the subject of many trade rumors already. The rest of the teams have an immediate need at QB or are looking for someone to groom.