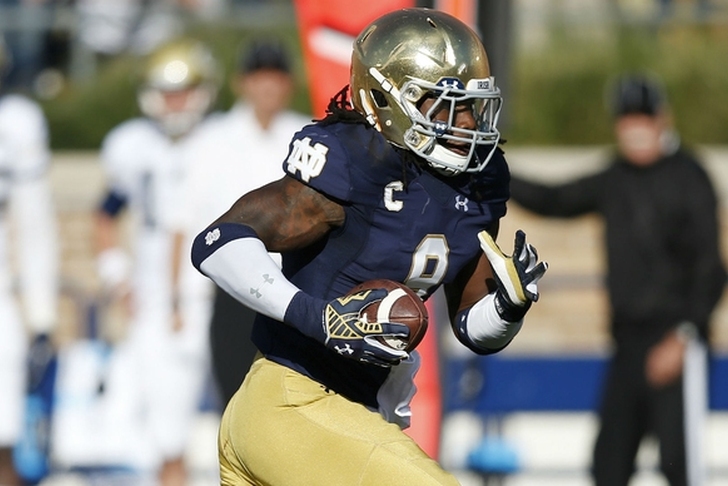 The NFL offseason is officially here now. The NFL Draft is one of the main focuses, especially with the NFL Combine underway. The Combine is one of the most important events for the draft each year. The combine provides teams a chance to interview and check out hundreds of prospect at one place and get a standard set of times, weight and heights on those players. The Combine is a near-week long event, and Day 3 was Friday.

Offensive lineman, running backs and kickers conducted their on-field workouts Friday. It's the last day for those players, and much of the takeaways below focus on those players. In addition, QBs, WRs and TEs underwent psych tests and had interviews with teams and media. Defensive linemen and linebackers had their medical exams and some had interviews today as well. With that in mind, here are our Takeaways From Day 3 Of The NFL Combine:

Jaylon Smith's Knee Injury
Unfortunately for the Notre Dame linebacker, the knee injury he suffered at the end of the season could cost him all of 2016 according to Ian Rapoport.

Difficult day for #NotreDame LB Jaylon Smith, who had his medicals. Ankle & knee nerve issues, teams believe he's out for 2016 -- at least

The major question now is how far Smith will far in the NFL Draft. He's an incredible talent and could have been a Top 5 selection. But that injury could cause teams to take him off their board entirely. Nerve damage is a serious issue and it could cause his draft stock to take a major hit. But, if he can regain his previous form, then Smith could be a Patrick Willis type player.

"They were pretty blunt as far as moving my knee, twisting it,” Jack said at the Combine. "But everything was fine. It's pretty much what I expected. My agent told me they were going to be really aggressive with it and just trying to kind of make it hurt. But it was fine."

Injury Concerns With Paxton Lynch?
Memphis' Paxton Lynch is generally expected to be the No. 3 QB taken in the 2016 NFL Draft behind Cal's Jared Goff and North Dakota State's Carson Wentz. However, Lynch revealed today that his medical results might have scared a few teams.

"I had an issue with my left knee and my right knee, and an issue with my AC joint," Lynch said. "When I hurt my AC joint back in my redshirt sophomore year, against Cincinnati I didn't realize ... they said I had a small fracture in my clavicle. That popped up on the X-ray, but it was healed. There were just some pieces of bone floating around in there. So it spooked a team or two I think. They requested the MRIs and all that."

NFL teams are very cautious with injuries, but Lynch never missed a game because of his injuries. He'll throw with the rest of the top QBs tomorrow.

Elliott And Henry Post Solid 40 Times, Alex Collins Does Not
The whole running back class ran their 40 times today. Ohio State's Ezekiel Elliott posted a 4.47 time, more than fast enough for a player of his skill set. That 40 time should only help team's views of him. Alabama's Derrick Henry weighed in at 247 pounds and then ran a 4.54 40 time. That's an impressive size-speed combo. Arkansas RB Alex Collins, who many thought could be the No. 3 RB off the board, posted only a 4.59 40 time. That could hurt his draft stock. For more NFL combine coverage, download the Chat Sports Android and iPhone app.

Keith Marshall Helped His Stock
Marshall was supposed to from a dangerous running back combo at Georgia with Todd Gurley. Heck, some thought Marshall was the better player. But injuries ruined Marshall's career. Friday, he posted a blistering 4.31 40 time, which will only help his stock. It was the best time among all RBs. While the injury red flag will cause teams to be cautious, Marshall has potential as a Day 3 draft pick.

"I do believe I'm the best player in the draft," Bosa said Friday at the NFL combine. "There's, of course, a lot of amazing players in the draft, and it's going to be up to Tennessee to make that decision. But I think as a top player, if you don't believe that, then there is something wrong. "I think I bring the best pass-rusher, the best defensive lineman in the country."

The Titans run a 3-4 defense, which might not be the best fit for Bosa. The Buckeye played in a 4-3 scheme at Ohio State and many think he's not an ideal fit in a 3-4 defense. However, Bosa says he can be scheme versatile. Bosa has the makings of a Top 5 pick and shouldn't slip out of the Top 10. For more NFL Draft coverage, download the Chat Sports Android and iPhone app.

Robert Nkemdiche Claims He Was Drunk
Nkemdiche's fall from a hotel balcony last December was a major story. It led to reports that Nkemdiche was on drugs on the time and that it could impact his draft stock. At the NFL Combine Friday, Nkemdiche said he wasn't on drugs, but was drunk when he fell.

"I was drinking, I was drunk, and it happened," Nkemdiche said. "They’re [NFL Teams] like, ‘Just stay away from it, keep your focus where it needs to be.'"

Nkemdiche's exact draft position could depend on his interviews with NFL teams. That's often an underrated aspect of the NFL Combine.