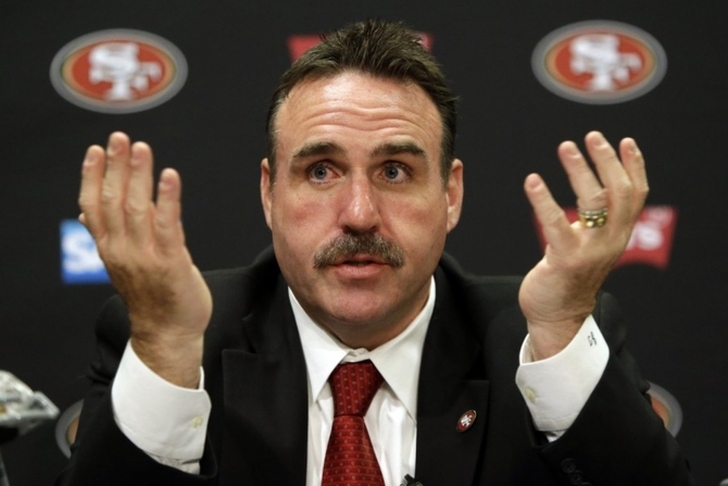 The last day of the NFL regular season is here, which means many coaches around the league are already peeking towards Black Monday. Three teams, the Titans, Eagles, and Dolphins, fired their head coach before the start of today's games, and the Browns have already joined them. The rumor mill will be churning around several teams and coaches and we're here to detail the four most intriguing rumors. Here's the latest:

49ers can Jim Tomsula
The longtime 49ers defensive assistant was let go by San Francisco after just one full season as head coach. Tomsula spent nine years with the organization, but he ultimately was held accountable for a 5-11 campaign that saw the team regress on both offense and defense. He did go out a winner, however, as the 49ers outlasted the St. Louis Rams (7-9) in an ugly overtime win, 19-16, by The Bay.

Chip Kelly to the Browns?
Kelly doesn't have any shortage of coaching opportunities since being fired by Philadelphia, but the Browns seems to be making a strong push to land his services after deciding to part ways with Pettine:

Plugged-in source just said to keep an eye on Chip Kelly to the Browns.

Cleveland had been reported to be pursuing Ohio State head coach Urban Meyer and offered to give him a significant amount of personnel control, but Meyer has said he won't leave the Buckeyes. It remains to be seen if they would be willing to give that kind of control to Kelly, but Cleveland is very intrigued by the idea of pairing him with quarterback Johnny Manziel, who Kelly recruited hard while he was at Oregon.

"Tom Coughlin’s future remains murky, with the Giants or elsewhere. At a time when most presume that it’s a done deal that he’ll be leaving the Giants and many think he’ll choose to resign in lieu of being fired, there’s an emerging sense that Coughlin will not walk away. This would force the Giants to either fire him or keep him. And that could result in a squabble between ownership, with a very real possibility that co-owner Steve Tisch may wans to move on and that co-owner John Mara may not want to move on."

FOX Sports' Jay Glazer reported earlier on Sunday that Coughlin was expected to resign and "ride off into the sunset" after Sunday's loss to the Philadelphia Eagles, but that doesn't appear to be the case right now.

Mora coached the Atlanta Falcons from 2004-2006 and the Seattle Seahawks in 2009, and has since turned UCLA into a Pac-12 power. He's reportedly a favorite for the San Diego Chargers job (if they fire Mike McCoy) and is a candidate for the Miami Dolphins job.

Sumlin, on the other hand, is trying to escape the pressure mounting around him in College Station, but could get interest from the Browns, given the extreme success Johnny Manziel had under Sumlin at Texas A&M.