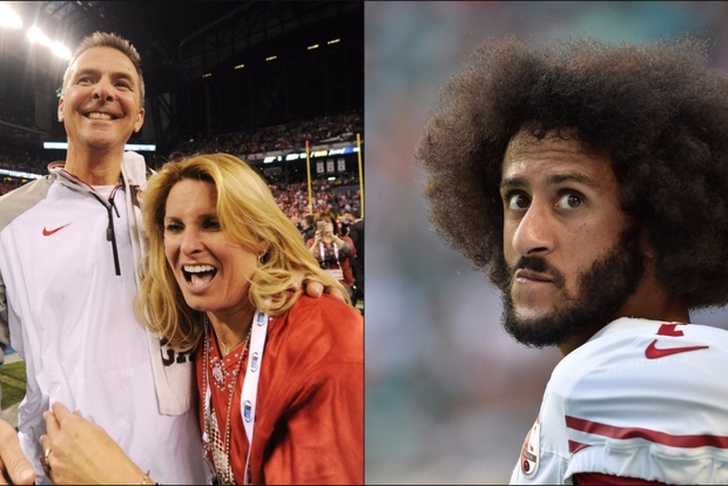 Former NFL quarterback Colin Kaepernick has filed a grievance under the collective bargaining agreement against all the owners in the league, alleging that they are colluding to keep him out of the league.

Kaepernick's decision to kneel during the national anthem remains a divisive topic, and once news of the grievance broke, Urban Meyer's wife, Shelley, took the opportunity to rip Kaepernick on Twitter.

Urban Meyer's wife, Shelley, had some thoughts on Colin Kaepernick.

She has since issued the following apology:

2/2-referring to behaviors/choices by any human, owning those choices, and the possible consequences that may follow. The end.

Urban Meyer was asked if he would support one of his players if they decided to protest during the national anthem last month and said "that [would be] between me and the player. To be honest, I don't know. And if I did, I probably wouldn't share it. To me, those are the types of meetings with players that you have trust."

Kaepernick remains unsigned despite many teams around the NFL needing a quarterback, leading many to speculate that there may be a coordinated effort pressuring owners from signing him.

While there has been no proof presented at this time of collusion, it appears that Kaepernick is convinced there is something going on behind the scenes.