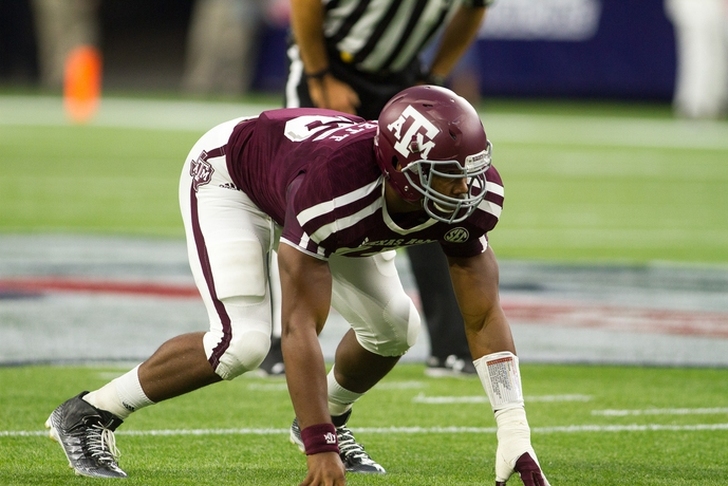 The 2017 NFL Draft is nearly a full year away, but draft experts have already started to turn their attention towards prospects who could enter the draft. ESPN's Mel Kiper has posted him preliminary top 25 Big Board. Since Kiper's big board is blocked by the ESPN Insider Pay Wall, we've compiled the list below for you.

All 25 players are listed below, along with their positions and schools. Not every player on this list is guaranteed to turn pro, and several might elect to stay for the senior (or in a few cases, junior) years. Kiper's big board will likely look much different closer to the draft, but this way-too-early look does give us a glimpse at some of the top prospects. With that in mind, let's get to the big board.

The 2017 draft is shaping up to be heavy on defense, especially pass rushers. The draft class is loaded with them, including the top of the draft board. Garrett is a deadly pass rusher, and is only going to get better. He has 24 sacks in just two seasons. He could very well be the top overall pick.

Other pass rushers, like Allen, Walker, Barnett, Harris and Lawson have proven themselves. Williams hasn't quite been a full-time starter before, but has been very productive. If he keeps his level of production up with more playing time, No. 2 won't seem that high. There are several defensive backs on the list, including Peppers. He's just a redshirt sophomore, and Michigan has used him all over the field.

The two QBs are Watson and Kaaya, and Kiper is right to put them as the top two at the moment. While that might not be the case at the end of the season, Watson and Kaaya could be franchise QBs. Kaaya is the more prototypical pocket passing QB and could be in for a big year under Mark Richt.

Fournette is the best RB prospect in several years, although excessive usage could be a problem. Chubb, if healthy, should be a first rounder.