The Latest NFL Rumors On Romo Returning In Week 10, Richardson And Wilkerson's Benching And More 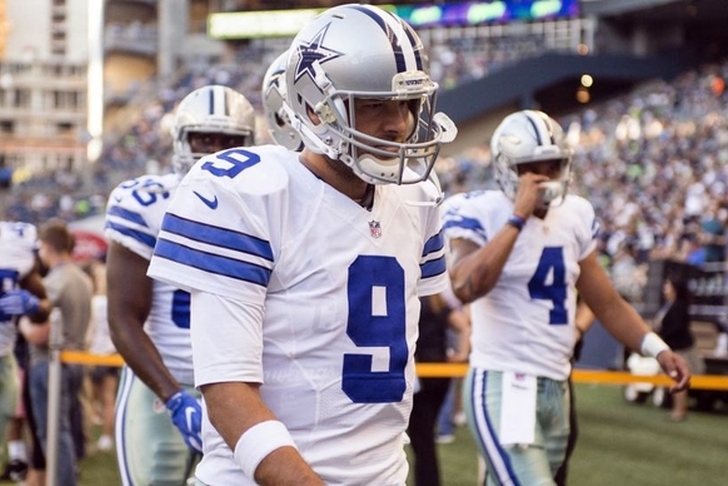 Week 9 of the NFL season is nearly complete, with just the Monday Night game left on the schedule. As with many Mondays, there are plenty injury updates to detail, including the potential return of Tony Romo. There are also several rumors floating around the league, including discipline problems within the New York Jets. All the latest NFL rumors and news are below.

Romo Potential Back In Week 10?
The Dallas Cowboys have been without QB Tony Romo all season, as he recovered from a back fracture. Dak Prescott's impressive play has allowed the Cowboys to be patient with Romo's recovery, but there's a chance Romo is ready to return in Week 10. Unlike last week, owner Jerry Jones didn't rule out a return for Romo this coming week.

"Unlike last week, I wouldn’t speculate," Jones told the Fort Worth Star-Telegram. "I don’t know. But he will do more. And he’s really doing things that are strong relative to last year’s strength. He’s ahead of last year."

However, Ian Rapoport isn't so optimistic.

#Cowboys owner Jerry Jones told reporters Tony Romo could be active this week. But from my understanding of his rehab, that’s a big stretch.

Monday and Tuesday, Tony Romo will focus on conditioning & change-of-direction. May not even practice fully this week. Doesn’t sound ready.

Richardson and Wilkerson Skip Meetings?
The New York Jets were without star defensive linemen Sheldon Richardson and Muhammad Wilkerson for part of the first quarter Sunday, as they were benched by head coach Todd Bowles. While Bowles didn't explain why, NJ.com might have the reason.

A source with knowledge of the situation told NJ Advance Media defensive ends Sheldon Richardson and Muhammad Wilkerson are regularly late or miss team meetings. The source added it happens "all the time," and "definitely" more often than other players on the team.

The New York Daily News reports the two were benched because they were late to a team meeting. However, the Daily News says it is "unaware" of missed meetings. Wilkerson has been suspended in the past for being late to meetings.

Aqib Talib Out Until After The Bye?
The Denver Broncos didn't have CB Aqib Talib Sunday Night against the Oakland Raiders as he deals with a back injury. It appears the team won't have him back next week either.

Talked to multiple #NFL sources Sunday who believe Talib won't play until after bye week to give back time to heal. #Broncos @DenverChannel

Bradley Roby got the start in place of Talib and wasn't as effective. But Denver needs Talib healthy for the playoff push and beyond, not necessarily for mid-season games.

Derek Wolfe Hurt As Well
Talib isn't the only Bronco hurt. DE Derek Wolfe suffered a hairline fracture in his arm and will miss time.

#Broncos DE Derek Wolfre suffered a hairline fracture in his elbow, as @DenverChannel reported. Details coming today, but could miss a month

The Denver run defense struggled against the Raiders and losing Wolfe for an extended period of time won't help that area.