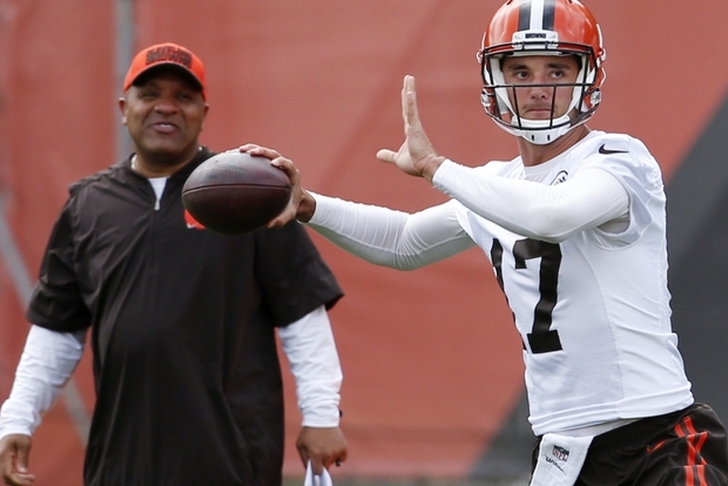 We're in the middle of the second week of the NFL preseason, and as such, teams are starting to make their final preparations for the start of the regular season. Quarterback competitions are starting to take over the headlines and injuries are starting to impact teams. Here are the latest NFL rumors and news you need to know:

Browns "grooming" Brock Osweiler to start Week 1?
Cleveland Browns head coach Hue Jackson has not named a starter for the regular season opener against the Pittsburgh Steelers, and the competition now seems to be between Brock Osweiler and second-round pick DeShone Kizer.

However, star offensive tackle Joe Thomas doesn't think it's much of a competition, saying he thinks the staff is "grooming" Osweiler to be the Week 1 starter.

"To be honest, I don't think DeShone will be the starter in Week 1,'' Thomas said before practice Wednesday.  "It is a competition, but I would expect Brock to win because of his experience. And a rookie quarterback is the hardest position to get ready to play in your first year.

"So there's no doubt he could win the competition. I definitely would expect probably Brock to win it just because my personal philosophy is as a quarterback it takes at least two or three years to have a basic level of understanding of NFL defenses and offenses to be able to operate proficiently out there on the field, especially in Week 1. Now I could be totally wrong. I might be going out on a limb here, but I think that they're grooming Brock to be the starter in Week 1 based on what I've seen."

Thomas went on to praise Kizer, saying he has a great future, but just needs more time to prepare and get ready - a sentiment Kizer agreed with.

Osweiler, who Cleveland acquired in a salary-dump trade with the Houston Texans this offseason, recorded 2,957 passing yards, 15 touchdowns and 16 interceptions while completing just 59 percent of his passes last season.

Jaguars not committing to starting quarterback
Blake Bortles went into last night's preseason game against the Tampa Bay Buccaneers as the unquestioned starter for the Jacksonville Jaguars. Now, the Jags apparently don't have a starter.

Following another disastrous performance from Bortles against the Bucs, head coach Doug Marrone said that he's re-opening the quarterback competition.

"I met with both quarterbacks afterwards. I told them what I'm looking for is, I'm looking for someone that's going to lead this offense, so I'm not happy with the performance today," Marrone said, via ESPN.com. "I'm not gonna sit here and B.S. anyone, I mean, everyone saw it out there. Whatever you want to call it, I'm still trying to evaluate who the best person is at that position. I told that to both quarterbacks."

There is the possibility of Jacksonville adding another quarterback before the start of the season - many have suggested they sign Colin Kaepernick - but Marrone wouldn't comment on that.

"I don't work with the 'outside the roster stuff,'" Marrone said. "So for me, I can't answer that question. I work with what we have."

The Jags did pick up the fifth-year option on Bortles' contract, meaning they have his rights through the end of the 2018 season, but they can still cut him after the season and not owe him any money for the next year (as long as he doesn't get injured).

If backup Chad Henne wins the starting job, he will be making his first start since 2014.

Bortles, the No. 3 overall pick in the 2014 draft, passed for 3,905 yards with 23 touchdowns and 16 interceptions while completing less than 59 percent of his passes last season. He also fumbled six times.

Patriots expected to lose DE Derek Rivers for season
Now, onto some unfortunate injury news. New England Patriots rookie defensive end Derek Rivers, the team's top pick in the 2017 draft (third round), suffered a torn ACL and sprained LCL after being injured in a joint practice with the Texans.

If the injury is confirmed after the second opinion, Rivers will undergo surgery that will cause him to miss the rest of the season.

New England is already thin at defensive end following Rob Ninkovich's retirement and Rivers was expected to be a crucial part of their rotation. The Youngstown State product recorded 58 tackles with 14 sacks and three fumble recoveries last season.