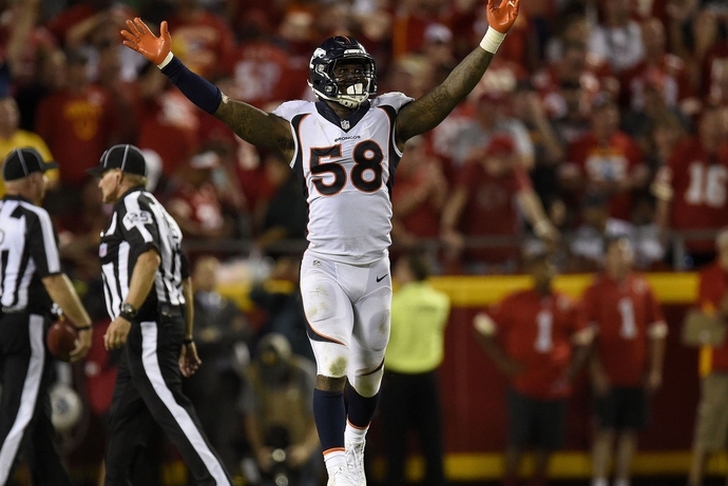 The NFL offseason is in a lull, as most teams are focused on minicamps and getting their current players ready for the upcoming season. While free agency is largely quiet, there is still plenty buzz around the league. There are a few notable names left on the market, and several teams are working on getting new deals for their current players. Here are the latest and greatest of NFL rumors and news around the league.

Von Miller's New Deal
The Denver Broncos are working to get star OLB Von Miller a new contract before the July 15th deadline for franchise players, and their latest offer is a massive one.

That nearly $19 million per year sum would put Miller just above Ndamukong Suh, making him the highest paid defensive player in the NFL. However, Miller has not accepted that deal and wants more. Mike Klis of USA Today reports the Broncos have pulled that offer as a result. But Klis' reports is contradicted by Denver Post beat writer Troy Renck, who says the Broncos' deadline for Miller passed, but that the offer has not yet been pulled.

Brandon Boykin To Dallas?
Update: It appears the Cowboys won't be signing Boykin after all.
Original report:
The Dallas Cowboys worked out Brandon Boykin Wednesday, and could end up signing the corner. While there were rumors that Boykin has a career threatening hip issue, Boykin said that's not the case.

Brandon Boykin said his work out with the Cowboys went fine. He hopes to sign with the team. He said he has no injury issues.

As for the Cowboys' side of things, Mike Fisher of 105.3 The Fan reports the Cowboys are "in the discussion stages" of whether to sign Boykin. The Cowboys could use some corner help, and Boykin could contribute in nickel and dime packages.

Andrew Luck Contract Extension
The Indianapolis Colts QB is about to get paid in a big way. Ian Rapoport reports the Colts and Luck are working toward agreeing to a true blockbuster extension. The new contract will top Joe Flacco's deal and make Luck the highest paid player in the NFL. Luck could earn at least $25 million per year. The Colts want Luck locked up, so much so that owner Jim Irsay wanted a 10-year deal for Luck before backing off that and offering a five or six year deal. When Luck signs his new deal, expect it to be a record-breaker.

The #Bengals have reached an agreement on a contract extension with RB Gio Bernard, source said (as @TomPelissero reported). 3 years, $15.5M

That new deal makes Bernard among the 10 highest paid RBs in the NFL. He passed C.J. Anderson for the 10th spot. Bernard will continue to share the backfield with Jeremy Hill.