The Latest NFL Rumors And News On The Combine, Free Agency And More 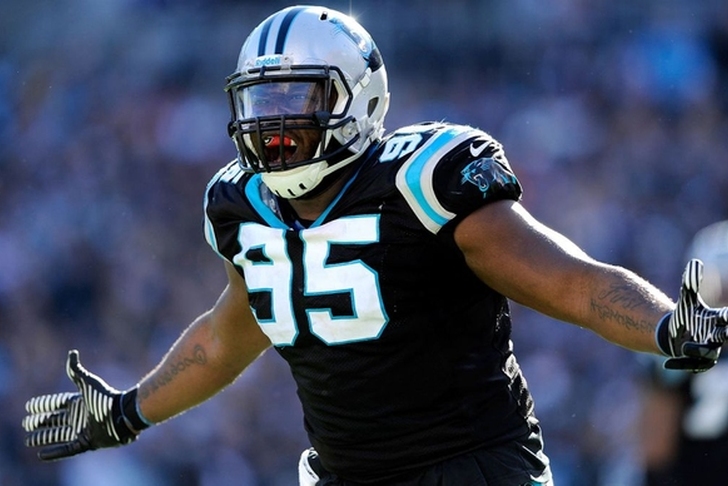 The NFL offseason is officially here now. Free agency and the NFL Draft are the main focus, especially with the NFL Combine here and the franchise tag window open. As is usually the case, the Combine has resulted in plenty of intriguing news and rumors. With that in mind, we've compiled the most interesting tidbits from around the NFL as the offseason rumor mill starts to heat up.

Did Hue Jackson Drop A Hint About Which QB He Wants?
This isn't exactly a major surprise given Cleveland's need, but head coach Hue Jackson guaranteed that Browns would leave the NFL Draft with a QB, reports Mary Kay Cabot. While it might not be a first round pick, Jackson also dropped a hint during the Combine today. Jackson said he prefers QBs with larger hands. Carson Wentz fits that description, but Jared Goff has smaller than ideal hands. Those are the two options for the Browns in Round 1, so perhaps that's a sign the team wants Wentz.

Panthers Want Charles Johnson To Take A Pay Cut?
Carolina Panthers Defensive end Charles Johnson is in the final year of his contract. He's set to have a massive $15 million cap hit this coming season, and that figure does not match his level of play. The team would save $11 million by cutting him, which is more than enough to pay for a replacement. If Johnson wants to stay in Carolina, he might need to take a pay cut, reports Pro Football Talk. Johnson is coming off a rough season, which could help convince him to take the pay cut. Johnson hasn't yet hit 30, which means he should have a few more years ahead of him. For more Panthers news, download the Chat Sports Android and iPhone app.

Falcons & Chargers Interested In Travis Benjamin?
Talks broke down between the Cleveland Browns and Benjamin recently, and the wide receiver is expected to hit the open market. According to Tony Pauline, the San Diego Chargers and Atlanta Falcons both have interest in Benjamin. Both teams are searching for younger No. 2 WR.

Lions GM Says Calvin Johnson Has Not Made Decision On Retirement
There have been several reports that Detroit Lions WR Calvin Johnson will retire this offseason. However, Johnson has yet to make a decision and GM Bob Quinn doesn't know what Johnson will do.

"I have spoken to Calvin, I did speak to Calvin, I’m not going to go into any details about what we talked about, and there is no update on his status right now," Quinn told Pro Football Talk. "I don’t have any expectations. We had a good conversation. He didn’t tell me if he’s leaning one way or the other. We’re giving him time to make that decision. There’s no deadline."

If Johnson does retire, the Lions will be in the market for another starting WR to pair with Golden Tate.

Redskins Hoping For RGIII Trade?
The Redskins will save over $16 million by cutting Robert Griffin III. It seems inevitable that the team will do just that, so why haven't they pulled the trigger? According to Pro Football Talk, Washington is holding out hope for trade. That seems like an unlikely outcome, as teams will just wait for Griffin to be cut and avoid taking on his massive salary. The Redskins don't have to cut Griffin until March 8th and they might not do so until then.

Bucs "Optimistic" About Bringing Back Doug Martin
The team's starting running back is set to be a free agent this offseason, and general manger Jason Licht told The Tampa Bay Times that he's feeling optimistic about bringing back Martin. With plenty of cap space this offseason, the Bucs should be able to resign Martin. For more Buccaneers coverage, download the Chat Sports Android and iPhone app.