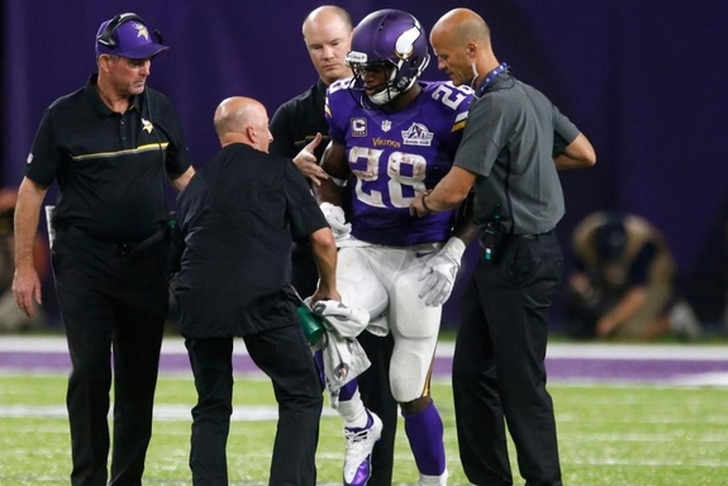 The New England Patriots beat the Houston Texans, 27-0, on Thursday Night Football, and there's plenty of buzz circling around the league ahead of this weekend's games. The injury bug has already hit several teams hard, and teams are scrambling to find ways to replace those injured players. Check out the latest NFL news and rumors below.

"He should [play]," Bradley said. "I'll talk to him today, but I think he made another step today. Definitely arrow's up for him. Like I said before, the issue is just more his conditioning and how he feels, what can we get from him, and I know that's improving."

Ivory was taken to the hospital the morning of September 11, before their season opener against the Packers, with what the team described as a general medical condition. He remained hospitalized for two days before being released and returning to the team's facility on September 15.

Peterson to miss months, not weeks
Minnesota Vikings running back Adrian Peterson underwent successful knee surgery on his torn meniscus on Thursday, and the results showed that he will be out longer than expected, according to ESPN's Ben Goessling.

Asked Thursday if it was likely Peterson would miss months, not weeks, after his surgery in the Twin Cities, coach Mike Zimmer said, "I would assume so."

In a statement after Peterson's surgery Thursday, the team said there were "no additional injuries or issues noted in or surrounding the knee joint during the surgical procedure."

On Wednesday, a source told ESPN that Peterson also had a torn lateral collateral ligament. The Vikings had denied that, and Peterson texted ESPN's Josina Anderson, "no torn LCL."

Peterson has a "bucket handle tear" of the meniscus. Backup running backs Matt Asiata and Jerick McKinnon are expected to split carries in Peterson's absence. The duo combined to rush for 1,108 yards in 15 games in 2014, when Peterson missed 15 games.

Seferian-Jenkins, 23, was stopped by the Florida Highway Patrol at 3:42 a.m. Friday and was booked at the Orient Road Jail at 6:24 a.m., charged with misdemeanor charges of driving under the influence and violating a court-ordered Ignition Interlock Device restriction from a previous arrest for DUI in Washington in 2013. He remained in jail at 10 a.m., held on $750 bond.

According to the FHP, Seferian-Jenkins was driving at 75-80 mph in a 55 mph zone as he entered southbound I-275 near State Road 60. He made an improper lane change, cutting off an FHP trooper and "weaving back and forth."

The arrest report states that Seferian-Jenkins was observed to have glassy eyes and the smell of alcohol and was "agitated," with slurred speech and leaning on objects for balance. He "performed poorly" on field sobriety tests and declined to provide a breath sample to measure his blood-alcohol level.

Buccaneers head coach Dirk Koetter would not comment on the incident directly.

“[General Manager] Jason [Licht] and I will be getting together this afternoon and whatever is going to happen will be forthcoming.”

Seferian-Jenkins plead guilty to a DUI charge in 2013 while he was at the University of Washington. He has three catches for 44 yards and a touchdown this season.