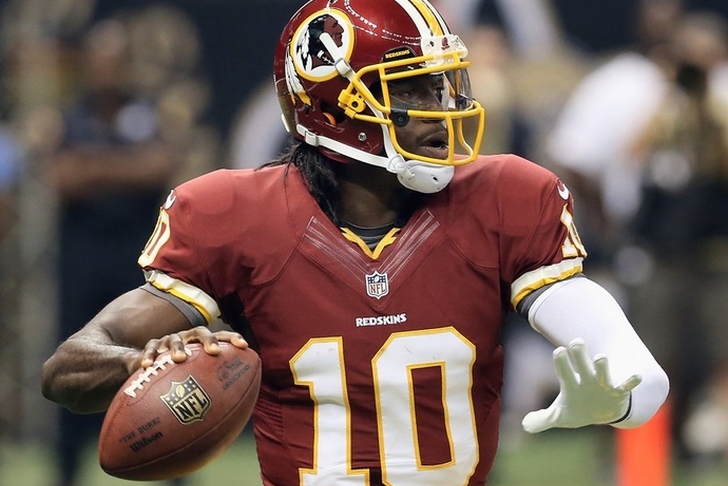 While NFL free agency is still going on, most of the big players are off the market. Still, there are several quality players left on the market that could turn out to be bargains for teams. While the NFL Draft is approaching, there will continue to be plenty of NFL free agency rumors, news and speculation in the coming days. Check out the latest and greatest of those offseason rumors below.

Browns "Making Calls" On RGIII
The Cleveland Browns brought in Robert Griffin III for a visit this weekend. It was widely viewed as the team just doing their due diligence on the former No. 2 overall pick, just like the Jets did. However, the Browns are doing more information gathering, reports Mike Florio of Pro Football Talk. Florio reports the team is making calls to learn more about Griffin and his character. That's an indication that the Browns are at least considering the possibility of signing Griffin. Cleveland was linked to a trade for Colin Kaepernick and many expect the team to use the No. 2 overall pick on a QB.

Arian Foster Update
The now-former Houston Texan running back is one of the bigger names left on the market, but is not the same player he once was. Foster is coming off an Achilles injury and will be 30 before the start of the season. Those factors are a big reason why Foster hasn't signed, but he's reportedly doing well in rehab.

"Arian's doing great," Abdul Foster, Arian's older brother and trainer told the Houston Chronicle. "When you go through stuff like this, you say, 'Okay, I'm financially set. I don't need to do this to take care of my family, but, at the end of the day, do I still love this game? Is there still a passion for me?' The reason I'm excited is because Arian is still passionate about football ... That's always a question when money is involved and you've made your mark in the league. Do you still have a desire to play in the league? Arian still does, which is exciting to me. The good part is he's motivated. He's definitely putting in the work here."

As for where Foster will play next season, that remains unclear. There hasn't been a done of interest or buzz yet, but that could change in the near future.

Titans Reached Out To Reggie Nelson
Despite being 32-years old, Nelson is arguably the top safety left on the market. He's coming off a great season and yet there's been very little buzz surrounding him. The Titans have reached out to Nelson, although that appears to be the Titans just touching base. For a player who had eight picks last season, it's surprising there hasn't been much of a market.

Cowboys Getting Visit From Patrick Robinson
The Cowboys confirmed they'll get visits from CB Patrick Robinson and RB Alfred Morris Monday. Both visits had previously been reported, but it's the first time the team has confirmed it. Robinson is a former first round pick who struggled with the Saints. However, he played much better for the Chargers last season and would be an upgrade in the secondary. Morris is a former 1,000-yard rusher, but is coming off a down season.