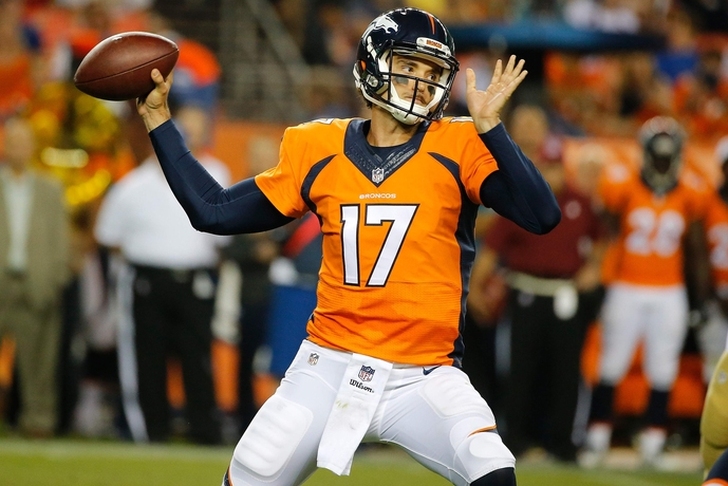 The start of NFL free agency is here. While free agency doesn't officially start until the new league year kicks off on at 4 p.m. today, teams used the legal tampering period to reach unofficial agreements with players. While the new contract can't be signed until later today, there have been plenty of moves already. With free agency here, expect a flurry of rumors in the coming days. Check out the latest and greatest of those NFL free agency rumors and news below.

Note: We'll update this throughout the day as stories break, emerge and develop.

Derrick Johnson's deal with the #Chiefs is for $21 million over three years, a source tells me.

Kansas City lost a few players today, but keeping Johnson was huge given the team's lack of depth at MLB.

#Jaguars and S Tashaun Gipson agreed to terms on contract, per source.

Gibson fills a need at safety for the Jaguars. Jacksonville continues to spend early in free agency. It's a five-year deal worth up to $35.5 million.

Freeman To Colts
The Falcons are expected to sign LB Jerrell Freeman away from the Colts.

Bears signing Danny Trevathan, according to @AdamSchefter. I expect the Falcons to sign Jerrell Freeman.

Freeman fills a major need for the Falcons, who need a middle linebacker.

Miller And Osweiler to Texans, Forte To Jets
In a span of less than 30 minutes, three major freea agency moves occured. Matt Forte signed with the Jets, Brock Osweiler joined the Texans and Lamar Miller did the same.

Doug Martin Re-Signs
The Buccaneers are keeping Doug Martin. He signed a five-year contract worth more than $35 million.

Among the teams interested in veteran RB Matt Forte: The #Jets and #Dolphins. His market will heat up when the other RBs sign.

#Falcons are wrapping up a deal with #Browns center Alex Mack. It's going to get done.

The deal will be worth $9.5 million per year, per Peter King, and it's a five-year deal. The addition of Mack fills a major hole for the Falcons.

Steelers To Sign Ladarius Green?
With the retirement of Heath Miller, the Steelers were in the market for a TE. They appear to have found their replacement.

Former Chargers TE Ladarius Green is expected to sign with
the Pittsburgh Steelers, per source.

The Chargers brought back Antonio Gates and Green likely didn't want to play the backup role anymore. No word yet on the terms of the contract. Green is a talented young TE, but he hasn't had the chance to be a the feature TE. That could change this season.

Vikings Land OG Alex Boone
Minnesota missed out on Keleche Osemele, but they did land another free agent offensive guard.

Former 49ers guard Alex Boone is signing with the Minnesota
Vikings, per source.

No word yet on how much Boone will get from the Vikings, but it's surely cheaper than what the Oakland Raiders paid Osemele.

Could Broncos Lose Osweiler?
Denver wants to keep QB Brock Osweiler, but the Houston Texans might have interest in the QB. ProFootballTalk reports it's unclear if the Texans' interest is real, or if Osweiler's camp is just trying to get more money from Denver. However, Mike Florio reports that if Osweiler visits Houston, he likely won't return to Denver. If the Broncos lose Osweiler, they'll be in desperate need of a QB.

Kaepernick To Replace Osweiler?
If Osweiler leaves, the Broncos could target Colin Kaepernick as the replacement.

If the #Broncos lose QB Brock Osweiler, expect them to come after QB Colin Kaepernick. That appears to be their backup plan.

Kaepernick wants out of San Francisco, and heading to the defending Super Bowl Champions could be a good fit for him. What the Broncos would give up is unclear.

Raiders focusing on Sean Smith?
Janoris Jenkins is off the market, signing with the New York Giants (more on that below), and the Oakland Raiders have turned their attention to another CB.

The #Raiders have turned their attention to #KCChiefs free agent Sean Smith, with Janoris Jenkins off the market. But KC isn't out of it yet

The Raiders are baldy in need for CB help, and Smith is likely the best one left on the market.

I’m told WR Travis Benjamin plans to sign with the #Chargers when the market officially opens tomorrow. San Diego gets a dangerous weapon.

The Chargers beat out the Atlanta Falcons and Cleveland Browns for Benjamin.

For #Bengals and S George Iloka, it's a done deal. 5 years, $30M with $18M over the first 3 years. Cincy players often play them all out.

The Bengals beat out the Vikings to keep the talented young safety.

Dolphins-Eagles Trade Still On
Although the trade was nearly canceled because of an injury concern with CB Byron Maxwell, the Eagles and Dolphins will complete their trade. LB Kiko Alonso and CB Byron Maxwell are heading to Miami, with the teams swapping first round picks.

Quick Hitters:
The NFL Free agency news is coming fast and furious, and the contract details leak out after the first reports emerge. With that in mind, this section is designed for the contract details that come out hours after the original reports. It's not the newest information since the reports of an agreement are usually hours, if not days old, but it is important information.