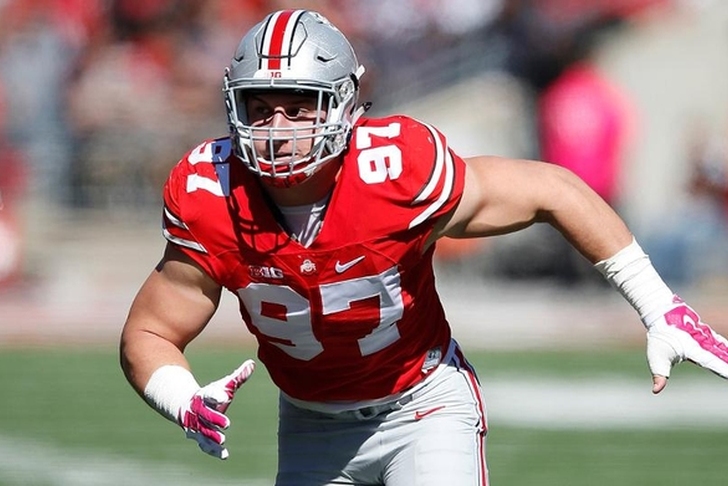 The NFL offseason is officially here now. Free agency and the NFL Draft are the main focus, especially with the NFL Combine underway and the franchise tag window open. As is usually the case, the Combine has resulted in plenty of intriguing NFL rumors and news. With that in mind, we've compiled the most interesting tidbits from around the NFL as the offseason rumor mill starts to heat up.

Eagles-Ravens Trade?
The Philadelphia Eagles are in need of a QB, but they might be picking too far back in the first round to acquire a true franchise option. However, NJ.com speculates the Eagles could swing a trade with the Baltimore Ravens. NJ.com spoke with Ravens GM Ozzie Newsome, who said the team was open to moving down.

Moving up would cost the Eagles at least one third round pick and possibly more. Philadelphia has two in this year's draft, although they are without a second rounder because of the Sam Bradford-Nick Foles trade. Trading with the Ravens would allow the Eagles to jump the 49ers, who could be in the market for a QB given the issues with Colin Kaepernick.

"I do believe I'm the best player in the draft," Bosa said Friday at the NFL combine. "There's, of course, a lot of amazing players in the draft, and it's going to be up to Tennessee to make that decision. But I think as a top player, if you don't believe that, then there is something wrong. "I think I bring the best pass-rusher, the best defensive lineman in the country."

The Titans run a 3-4 defense, which might not be the best fit for Bosa. The Buckeye played in a 4-3 scheme at Ohio State and many think he's not an ideal fit in a 3-4 defense. However, Bosa says he can be scheme versatile. Bosa has the makings of a Top 5 pick and shouldn't slip out of the Top 10. For more NFL Draft coverage, download the Chat Sports Android and iPhone app.

Robert Nkemdiche Claims He Was Drunk
Nkemdiche's fall from a hotel balcony last December was a major story. It led to reports that Nkemdiche was on drugs on the time and that it could impact his draft stock. At the NFL Combine Friday, Nkemdiche said he wasn't on drugs, but was drunk when he fell.

"I was drinking, I was drunk, and it happened," Nkemdiche said. "They’re [NFL Teams] like, ‘Just stay away from it, keep your focus where it needs to be.'"

The Dallas Cowboys and San Diego Chargers are two teams that are looking hard at Nkemdiche, reports Tony Pauline. The Top 5 might be too high for Nkemdiche to go, so perhaps both teams are hoping he falls to them in Round 2.

Dolphins Want A Guard In The Draft
The Miami Dolphins know they need to update the interior of their offensive line. The Palm Beach Post reports the getting a guard is a top priority for the Dolphins in the NFL Draft. The issue for the Dolphins is that there might not be a lineman worth taking at No. 8 overall that fits the team's needs. Laremy Tunsil is likely to be off the board, and Ronnie Stanley is a tackle, not a guard. However, they could shift Stanley (or Branden Albert) over to guard. Jack Conklin and Taylor Decker could be guards in the NFL, but they're not worth a top 10 pick. The Dolphins could elect to take a guard on Day Two, when there will be more options available.