The Latest NFL Draft Rumors And News On Carson Wentz, Browns Trading Down And More 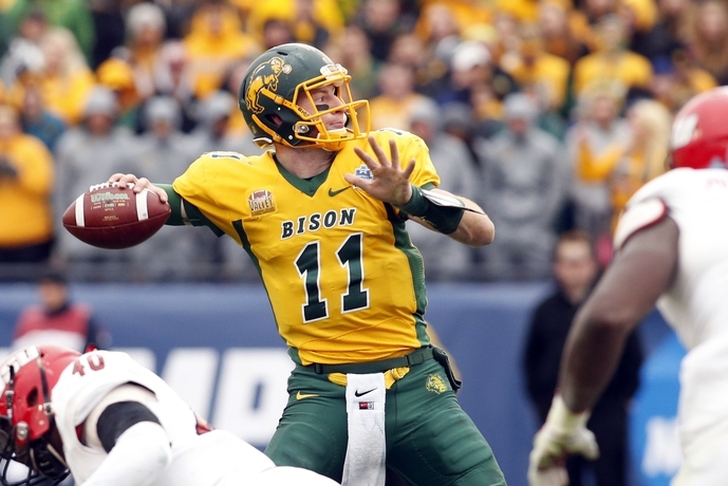 With NFL free agency winding down, the NFL Draft rumor mill is starting to pick up. The rumors around the draft aren't limited to just the prospects who could be selected, but also current players who could be moved on draft day. The draft is three weeks away, and there's plenty rumors, news and speculation floating around. Check out the latest and greatest of those draft rumors below.

Rams Want Carson Wentz?
The Rams pulled off a stunner of a trade Thursday morning, moving up to the No. 1 overall pick. The Rams are going after a QB, and it appears that QB will be North Dakota State's Carson Wentz.

So, as @Bachelors_III wryly points out, the NFL in LA goes to Carson after all. Rams are targeting Carson Wentz.

Farmer isn't the only one reporting that the Rams want Wentz. Mike Mayock and John Clayton both think Wentz will be the pick. It's fair to pencil in Wentz as the No. 1 overall pick in mock drafts, although much could change. However, Adam Schefter reports the Rams want Goff.

Browns Looking To Trade Down?
The Browns had been linked to Wentz, but the Rams moving up for him might mean the Browns try to trade down. For one, their QB of choice might be off the board. But, any team that really wants Goff (or Wentz) might need to make a deal with the Browns. As a result, they're looking into making a move down.

#Browns had offers for number 2, previously. Working the phones now to see how to maximize a trade back.

The Browns could try to add more picks in this year's draft, but there's no guarantee they'll actually move down this year. The 2016 NFL Draft really starts with the Browns this year, and what they do will shape the outcome of the draft.

Giants And Treadwell?
The New York Giants hold the No. 10 overall pick in this year's draft, and are in the mix for several different players. According to Tony Pauline, one of those is Ole Miss WR Laquon Treadwell.

"I've been told the New York Giants continue to show strong interest in Treadwell, and he is in the conversation for the 10th pick," Pauline wrote.

Treadwell has seen his stock drop a bit, but Pauline reports at least a few teams don't buy the idea that he's not the No. 1 WR in this year's draft. The Giants could add a WR to pair with Odell Beckham, since Victor Cruz has battled injuries in recent years and there isn't much depth on the roster.

Rams Held Off On Trade Because Of Kobe
That Rams-Titans trade was actually agreed to last night. However, the teams held off on announcing the move because it was Kobe Bryant's final NBA game.

Rams official on withholding trade until today: "Kobe deserved his night. There was no reason for this trade to be announced on his night.”

The Rams now play in Los Angeles, and the city was completely focused on Bryant's last game. Of course, holding off on announcing the move also let the Rams get all the attention today.