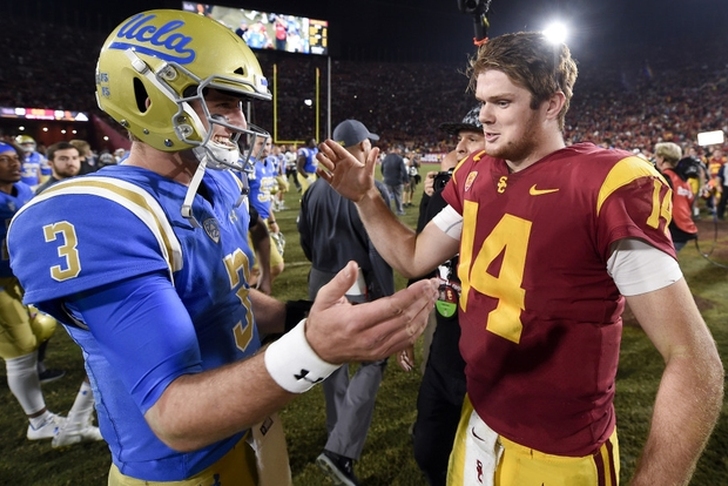 The 2018 NFL Draft will take place at the Dallas Cowboys AT&T Stadium, April 26-28. The NFL Draft only a few months away which means it's time for NFL mock draft season and  ESPN's NFL Draft expert,Todd McShay just released his second mock draft. You can see McShay's entire mock draft here, but you do need ESPN Insider. McShay's NFL Mock Draft 2.0 is a little different than Kiper's 1.0 version, the glaring difference is the new quarterback he has going first overall to the Browns. In his first mock draft, he had Wyoming quarterback Josh Allen go first, but he finds himself sliding down the draft board to another quarterback-needy team.Without further ado, here are the first 32 picks in McShay's new mock draft:

Who do you think your favorite NFL team will draft in round 1?
Tell us here ---> NFL by Chat Sports

1. Cleveland Browns - Sam Darnold, QB, USC
Darnold entered the season as the No. 1 pick and appears to be back on top because of his arm strength, accuracy, and mobility. However, turnovers and decision-making have become major question marks with him this year. The Browns had the most interceptions last season 28, but hopefully, for Cleveland's sake Darnold's upside is worth the risk.

2. New York Giants - Josh Rosen, QB, UCLA
Even though he was surrounded by lesser talent and bad coaching throughout his UCLA career, Rosen has continued to show the arm strength, accuracy, and pocket awareness to solidify him as a top pick. He does make some questionable throws under pressure, but for a quarterback-needy team like the Giants, Rosen's positive traits will far outweigh any concerns. With Manning turning 37 he is obviously on the decline and the Giants need to draft their next franchise quarterback.

3. Indianapolis Colts - Bradley Chubb, DE, NC State
Chubb returned for his senior season in Raleigh and was an absolute monster, picking up 72 tackles - 23 for a loss - and 10 sacks. At 6-foot-4 and 275 pounds with incredible quickness, he can play anywhere along the defensive line. The Colts need major upgrades on that side of the ball, making Chubb an excellent fit.

4. Cleveland Browns (from Houston Texans) - Saquon Barkley, RB, Penn State
Barkley is the top running back. The most complete running back to enter the draft in the last 10 years. He has the speed, agility, balance, vision, and power that leaves the NFL scouts drooling. The NFL comparison I see when watching Barkley is LaDainian Tomlinson or for a more recent comparison, I see David Johnson. Barkley is truly that special.

5. Denver Broncos - Baker Mayfield, QB, Oklahoma
The Broncos need to accept that their 2016 first round pick with quarterback Paxton Lynch was a swing and a miss and now it's time to move on. This is a potential landing spot for quarterback Kirk Cousins, but if Denver goes into the draft without a quarterback, look for them to snag Mayfield. Baker can handle the spotlight in Denver because he thrives in big moments and loves the attention. Baker the last three seasons at Oklahoma he had 117 passing touchdowns and 20 interceptions.

6. New York Jets - Josh Allen, QB, Wyoming
He's got all the physical tools (size, arm, athleticism), but they're very raw. He's had issues this year, but some team will fall in love with his upside and Kiper is guessing that's the Jets. The Jets haven't selected a quarterback in the first round since 2009 when they drafted Mark Sanchez at nine overall.

7. Tampa Bay Buccaneers - Minkah Fitzpatrick, CB, Alabama
The most dynamic defensive player in college football this past year was Minkah Fitzpatrick. He is a safety, but can play multiple positions on the field. He is a swiss army knife at Alabama giving offensive coordinators nightmares. He truly is the total package with his size, speed, football IQ, and athletic ability. He will be a cornerstone of a defense in the NFL for many years.

8. Chicago Bears - Calvin Ridley, WR, Alabama
Entering the 2018 NFL Draft, there is a name that seems to be frequent one when talking about the best wide receiver in college football - and that name is Alabama junior Calvin Ridley. He is 6'1" and 190 pounds with freakish athletic ability. This season for the Crimson Tide he had 63 receptions, 967 yards, and five touchdowns. A great NFL comparison for Ridley is Minnesota Vikings wide receiver Stefon Diggs.

9. San Francisco 49ers - Denzel Ward, CB, Ohio State
The 49ers need to upgrade their defense, especially at the cornerback position. Ward is regarded as the best cover corner in this years draft class who can also come up and make a tackle. The 49ers finished the season strong with a five-game winning streak and in a division with Russell Wilson and Jared Goff upgrading the secondary is important.

10. Oakland Raiders - Tremaine Edmunds, LB, Virginia Tech
His NFL Draft stock is soaring due to his size-speed skill set, plus athletic ability. The Raiders also need help in their secondary, but linebacker is their biggest hole on defense. He led the Hokies with 109 tackles, adding 5.5 sacks, 14 tackles for loss, and three forced fumbles this past season.