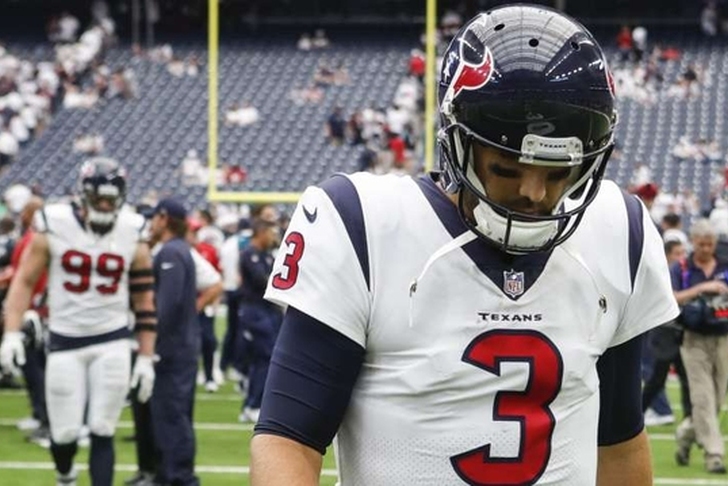 If you are clicking on this saying Tom Savage is already benched, you are right but who will be the second quarterback benched? I think there is a realistic chance that three of these quarterbacks get benched. The NFL is a cut throat business and if you don't perform then it is the next man up.

Mike Glennon +250
Glennon has first round rookie Mitchell Trubisky breathing down his neck. Glennon is (0-1) on the season and if they keep losing games than it may be time for Trubisky.

Blake Bortles +280
Blake Bortles has 12 career wins and 11 career pick six's. Hopefully, a solid defense and running game can allow him to not throw the ball.

Josh McCown+300
McCown is a good bet to get benched but the reason why I think he won't is that I think he gets hurt before being benched. This guy gets hurt every season and I don't see that changing.

Tyrod Taylor +500
For some reason, the Bills coaching staff doesn't like Taylor and it's obvious. They took away all his weapons on offense and are throwing him to the wolves this season.

Jay Cutler +600
Cutler just joined the team and may struggle to build chemistry with his offense. Personally, I think he has looked good and comfortable in a system he has already played in.

DeShone Kizer +1000
I don't see this happening unless Kizer totally implodes. The Browns wouldn't have handed the job to Kizer if there was any chance of benching him. The Browns are in rebuild mode and building your franchise quarterbacks confidence is a huge part in that.

Trevor Siemian +2000
We know Siemian is better than Brock Osweiler and I have no idea what is going on with Paxton Lynch. Siemian doesn't make mistakes and lets his defense and running game win games for the Broncos.

Sam Bradford +3000
After the showing Bradford put on Monday Night I am surprised he is even on the list.

That's the Vegas odds but I also want to hear what you think.

Who will be the 2nd QB in the NFL to get benched not injury related? #NFL pic.twitter.com/5bkKJV0XSh