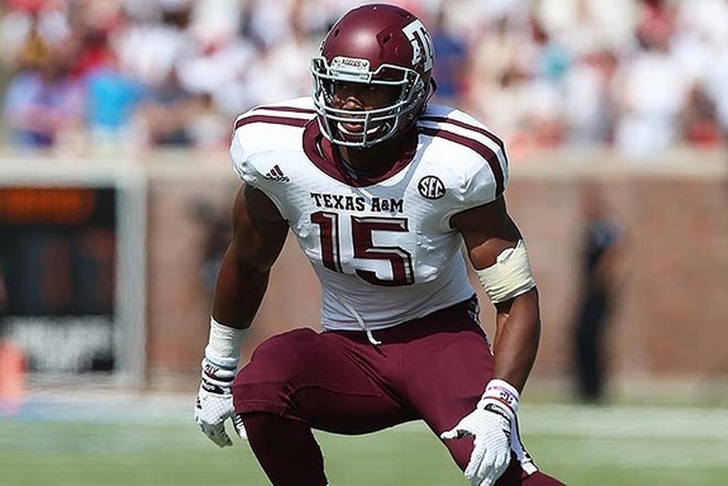 The deadline for underclassmen to declare for the 2017 NFL Draft has passed, meaning that the field is set. As such, Mel Kiper, ESPN's NFL Draft expert, just released his first mock draft. You can see Kiper's entire mock draft here, but you do need ESPN Insider. Without further ado, here are the top 10 players in Kiper's new mock draft:

1) Cleveland Browns - Myles Garrett, DE, Texas A&M Aggies
Kiper: "Garrett is the top prospect on my Big Board, and he's a premier pass-rushing talent who had 32.5 sacks in three seasons for the Aggies. The Browns are in the beginning stages of a rebuild, and Garrett would be a foundational piece. Keep an eye on a potential trade down from Cleveland, though, as it did last year out of the No. 2 spot. The Browns want to keep acquiring picks. They could also fall in love with one of the talented but green quarterbacks."

2) San Francisco 49ers - Mitch Trubisky, QB, North Carolina Tar Heels
Kiper: "This isn't a strong draft for quarterbacks. Trubisky is the best QB in the draft, but he's only No. 16 on my Big Board. He has only one season of collegiate starting experience, completing 68.2 percent of his passes with 30 touchdown passes and six interceptions. The 49ers still don't have a general manager or coach, and Colin Kaepernick could be on his way out."

3) Chicago Bears - Jonathan Allen, DL, Alabama Crimson Tide
Kiper: "Allen, who had 22.5 sacks over the past two seasons, could play defensive end or defensive tackle in the NFL. Positional flexibility is a big selling point, and he'd likely play end in the Bears' 3-4 in this scenario. He was one of the best players in college football in 2016. The Bears had a disappointing 2016 season and have needs across the board, including at quarterback, safety and potentially receiver, depending on what happens with free agent Alshon Jeffery."

4) Jacksonville Jaguars - Jamal Adams, S, LSU Tigers
Kiper: "Adams is built for today's NFL as a versatile safety who can play in the box effectively, make tackles against the run and move to the edges and track slot receivers. Jacksonville hit on a couple of defenders in the 2016 draft (Jalen Ramsey and Yannick Ngakoue; Myles Jack is still an unknown), but the Jags need more help."

5) Tennessee Titans (from Los Angeles Rams) - Mike Williams, WR, Clemson Tigers
Kiper: "One of the stars in the Tigers' national title game win, Williams finished the season with 98 catches for 1,361 yards and 11 touchdowns. He's the top wideout in this draft. Marcus Mariota could use a deep threat and chain-mover -- Williams was fifth in the country in 2016 with 60 catches that resulted in first downs."

6) New York Jets - Marshon Lattimore, CB, Ohio State Buckeyes
Kiper: "Lattimore is another first-year starter who jumped to the top of my cornerback rankings with a stellar season. A hamstring injury limited his time on the field in Columbus in 2014 and 2015. Speed, size (6-foot-1, 190) -- he has all the traits to be a star. Darrelle Revis could be on his way out with the Jets -- or move to safety -- and Lattimore would slide into his spot on Day 1."

7) Los Angeles Chargers - Cam Robinson, OT, Alabama Crimson Tide
Kiper: "This isn't a great class for top-tier blindside protectors, but Robinson is at the top of the list, though I think his best skill -- run-blocking -- means he'd be better as a right tackle at the next level. A three-year starter for the Crimson Tide, he's a known commodity in the NFL. The Chargers ranked in the bottom third of the league in rushing (3.8 yards per carry, 97.9 yards per game) in 2016, and tackles Joe Barksdale and King Dunlap have underwhelmed."

8) Carolina Panthers - Leonard Fournette, RB, LSU Tigers
Kiper: "This is really the first spot I see that could be a good fit for Fournette, barring a trade up. He's a special athlete with an incredible combination of size (6-1, 235), speed and power, but he won't get a grade as high as I gave Ezekiel Elliott last year. Elliott went No. 4 in 2016, but backs have been devalued in recent years -- he was the only back taken in the first round. Jonathan Stewart turns 30 this year and averaged only 3.8 yards per carry in 2016."

9) Cincinnati Bengals - Solomon Thomas, DL, Stanford Cardinal
Kiper: "Thomas, one of the biggest risers of the year, had eight sacks in 2016. At 6-3, 270, he could move inside and play tackle, too. The Bengals need pass-rushing help -- they had only 33 total sacks in a disappointing 2016 -- and this is a good draft for edge rushers."

10) Buffalo Bills - Deshaun Watson, QB, Clemson Tigers
Kiper: "I'm a believer in franchises with new head coaches starting fresh with new quarterbacks, and it appears likely the Bills move on from Tyrod Taylor after hiring Sean McDermott. That leaves Buffalo with a huge hole and a top-10 pick to fill it. I wrote last week that I didn't think Watson would get a post-title game draft bounce, but I've heard differently from people around the NFL. Though he had an up-and-down season -- and threw 17 interceptions -- Watson is extremely talented. He's the second quarterback off the board in this projection, ahead of Notre Dame's DeShone Kizer."