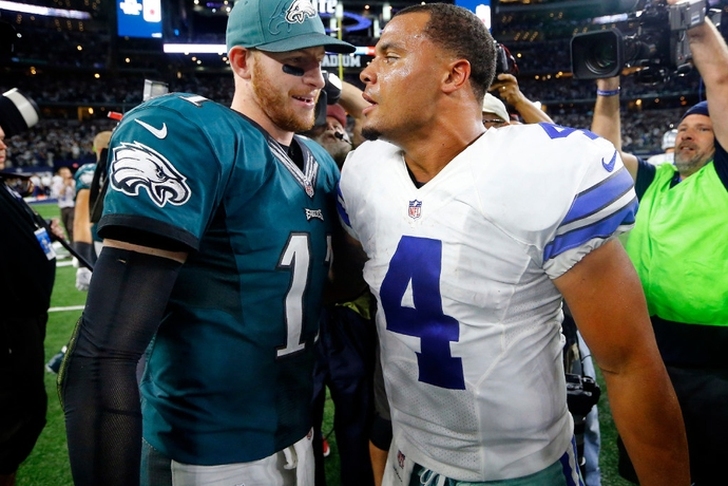 Chat Sports Consensus MVP Power Rankings entering Week 8 of the NFL season. It has been an eventful roller coaster ride of a season and some faces have actually been on this list for most of the season and some find themselves on here for the first time. If you feel like we left off someone either Tweet @ChatSports or comment on the video above on Facebook.

9.) Dak Prescott
Quarterback - Dallas Cowboys
The Cowboys looked dominate against the 49ers this past weekend and seem to be back on track. Prescott may not put up the huge numbers but he is in total control of this offense and has blossomed into one of the best young quarterbacks in the league and doesn't get nearly the respect he deserves.

8.) Todd Gurley
Running Back - Los Angeles Rams
Maybe the most important running back to his team in the NFL. I think it is up for debate for sure. The Rams are 5-2 and a serious contender this season and a large part of that is on the shoulders of Gurley. We now he is a great runner but this season he has shown the ability to catch. He has the fourth most receiving yards among running backs with three touchdowns. He leads the team with total touchdowns (8), rushing yards (627), and receptions (27). Doing it all.

7.) Deshaun Watson
Quarterback - Houston Texans
Another rookie makes the list.Watson has taken the NFL by storm this season. He has given hope to the city of Houston because the future is looking bright with this young quarterback. We knew his running ability was a big part of his game and he is one of only two quarterbacks (the other is Cam Newton) who has over 200 rushing yards among quarterbacks. Where he has truly impressed people is with his arm and his ability to spread the ball this year. He has 15 touchdown passes and is on pace to break the rookie record of 26 touchdown passes.

6.) Alex Smith
Quarterback - Kansas City Chiefs
Currently, Alex Smith leads the NFL in completion percentage, yards per attempt and passer rating. The last three times a quarterback led the NFL in these three categories after seven weeks he won the MVP. Not only did those three quarterbacks win the MVP but made the Super Bowl.

5.) Drew Brees
Quarterback - New Orleans Saints
The Saints look to be for real. The Saints are in first in the NFC South which is arguably the best division in the NFC. I say this considering the last two Super representatives for the NFC are from this division. Brees is the field general and will continue to be the captain of this team.

4.) Antonio Brown
Wide Reciever - Pittsburgh Steelers
Brown leads the NFL in targets (84), receptions (52), and receiving yards (765). To put that into perspective the next closest to him in all three of those categories is 68 targets, 45 receptions, and 545receiving yards. So he is clearly ahead of those players. He is clearly the best wide receiver in the league, a league which is filled with talented wide receivers.

3.) Le’Veon Bell
Running Back - Pittsburgh Steelers
The Steelers are finally back on track because they have been riding the train that is Le'Veon Bell. If you are on the tracks and the Steelers ring the bell you will be steamrolled. The last two weeks Bell has 38 touches and 35 touches. That is a heavy workload. He is currently on pace for 462 touches this season.

2.) Carson Wentz
Quarterback - Philadelphia Eagles
The Eagles have the best record in the NFL, Wentz leads the NFL in passing touchdowns, he is top five in passer rating and third in rushing yards among quarterbacks. Remeber above how I said this is a consensus? I strictly put that in there because I don't understand how Wentz isn't the leading MVP candidate in the NFL.

1.) Tom Brady
Quarterback - New England Patriots
Brady I could argue is the most important player on his team in the NFL which is maybe what truly defines what an MVP is. The Patriots have won three in a row and look to be back to a dominant team in the NFL. Brady leads the NFL in passing with 2,208 yards. Brady is currently on pace to throw for 5,046 yards. He is second in the NFL in quarterback rate, and tied for second in touchdown passes