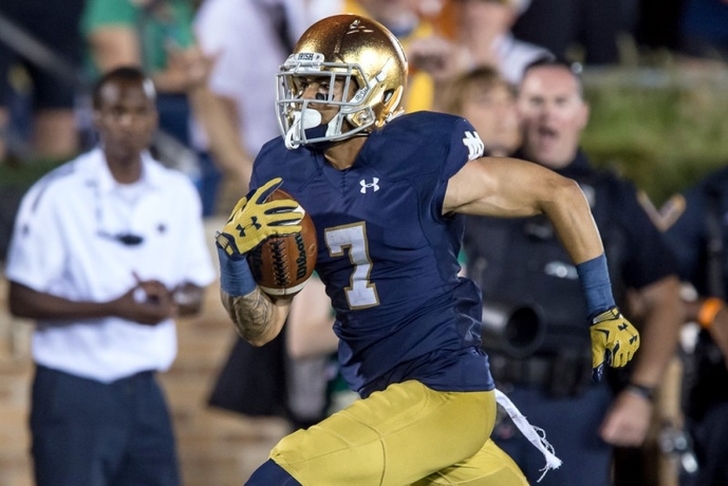 In a deep NFL Draft class for wide receivers, Notre Dame Fighting Irish WR Will Fuller is among the best. He was a true playmaker at Notre Dame. Fuller ran the fastest 40 time at the NFL combine among WRs and showed he's one of the best deep threats in the 2016 NFL Draft.

While Fuller has battled drops at times in the NFL, he looked great in the combine drills. There isn't much difference between No. 2 and No. 6 WRs in this year's draft, but Fuller's combine effort puts him in mix to be the second WR off the board. Fuller could be a late first round pick and will be off the board before the end of round two. While several teams will have interest in Fuller, we've narrowed the options down to the most likely teams. With that in mind, here are the five teams most likely to select Will Fuller in the 2016 NFL Draft.

5. Minnesota Vikings
This is essentially Fuller's ceiling. The Vikings hold the No. 23 overall pick and could take Fuller if Laquon Treadwell is already off the board. There's a good chance Treadwell is still on the board, however, which will push Fuller down further. Fuller would give QB Teddy Bridgewater the true depth threat he lacks.

4. San Francisco 49ers
The 49ers are in need of WR help, especially if Anquan Boldin leaves. Fuller would make for a strong round two selection and the 49ers' pick is near the floor of his draft range. Chip Kelly loves speed and although he's not the one making the decisions, Fuller would be a great fit in Kelly's offense. For more NFL Draft coverage, download the Chat Sports Android and iPhone app.

3. Cincinnati Bengals
The Bengals could lose both Marvin Jones and Mohamed Sanu this offseason and it's very likely at least one leaves. If that's the case, the Bengals could take a WR in round one. A.J. Green can stretch the field, but Fuller has more speed than Green and would be more of a true deep threat. Adding Fuller would give the Bengals yet another dynamic playmaker.

2. Carolina Panthers
Speaking of playmakers, that's something the Panthers need at WR. Without Kelvin Benjamin, the Panthers leaned heavily on Ted Ginn at WR. The team could replace Ginn with Fuller, who has better hands. Benjamin and Fuller would make for a good one-two combo, with Fuller acting as the deep threat and Benjamin as the possession WR.

1. Cleveland Browns
When the Browns are on the clock in round two, drafting a WR is a likely option. Unless the team resigns Travis Benjamin and adds another WR (or two) in free agency, the team will need to spend a early pick on the position. Drafting a player like Fuller gives the team the type of deep weapon they lack. Teams often add a weapon or offensive lineman when draft a QB early and that could be the case this season for Cleveland.