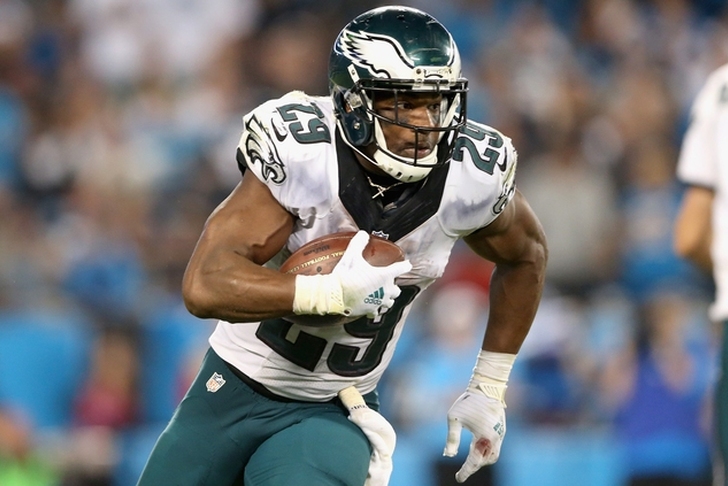 DeMarco Murray might not be with the Philadelphia Eagles for much longer. Ian Rapoport reported Friday that the Eagles are accepting trade offers for Murray. It's the latest in a long line of speculation and reports that the Eagles could cut Murray and/or that Murray won't be with the team next season.

The Eagles gave Murray a 5-year, $40 million contract last offseason and that contract is the biggest thing standing in the way of the Eagles moving on from him. Murray's cap hit for next season is $8 million, but he'd count $13 million against the cap if the Eagles cut or trade him. His contract becomes easier to get rid of after 2016, so the Eagles might be stuck with the 27-year old running back who averaged a career-worst 3.6 yards per carry. With Murray's salary and the cap hit for the Eagles, a trade is going to be very difficult, if not impossible. However, it is a possibility. With that in mind, here are 5 Teams That Could Trade For Eagles RB DeMarco Murray

Tennessee Titans
The Titans have a budding franchise QB in Marcus Mariota, but don't have the running game to pair with him. Bishop Sankey is looking like a bust and Antonio Andrews actually has a worse yards per carry average. The Titans are projected to have nearly $50 million in cap space next season, so money is no issue. They could afford to take Murray on in a trade, something not every team on this list can do. Murray is best as a feature back and that's something the team just does not have at the moment.

Seattle Seahawks
The Seahawks have Thomas Rawls, but they did lose Marshawn Lynch to retirement. The team has already said that Rawls will have competition in the backfield. While Rawls played well last season, he's coming off an injury and is still relative unproven. If the price is cheap to land Murray, the Seahawks could be one of the teams interested. It's a long shot, but it is a possibility. For more Seahawks coverage, download the Chat Sports Android and iPhone.

Cleveland Browns
The Browns have some issues on the offensive line, but their running backs haven't helped either. Duke Johnson has shown promise, but he's more of a third down back than an every down option. Isaiah Crowell can be upgraded and Murray would be the perfect replacement. Murray and Johnson would form a strong one-two punch and the Browns have the cap space to taken on Murray in a trade or add him as a free agent. The Browns have a severe lack of playmakers and Murray would be the best one instantly.

NOW READ: 4 Teams That Could Trade For Colin Kaepernick

Oakland Raiders
The Raiders had interest in Murray last season, despite the presence of Latavius Murray. While the Raiders' current Murray played well last season, the Raiders could still have interest in adding DeMarco. He'd give them another talented running back that would make Oakland's offense even more deadly. Oakland has tons of cap space, so money won't be an issue at all if the team wants to go get him. For more Raiders coverage, download the Chat Sports App.

Dallas Cowboys
The most obvious destination is the last one on this list. Murray clearly misses the Cowboys and the Cowboys miss Murray. The running game hasn't been quite as sharp this season and the Cowboys have tried multiple running backs this year. None have been as effective as Murray was last season, although Darren McFadden played well. The Cowboys are tight on cap space, so a trade will be very complicated. Trades between division rivals are also difficult. Murray wants to return to Dallas, but he might need to restructure his deal in order for a trade to occur.