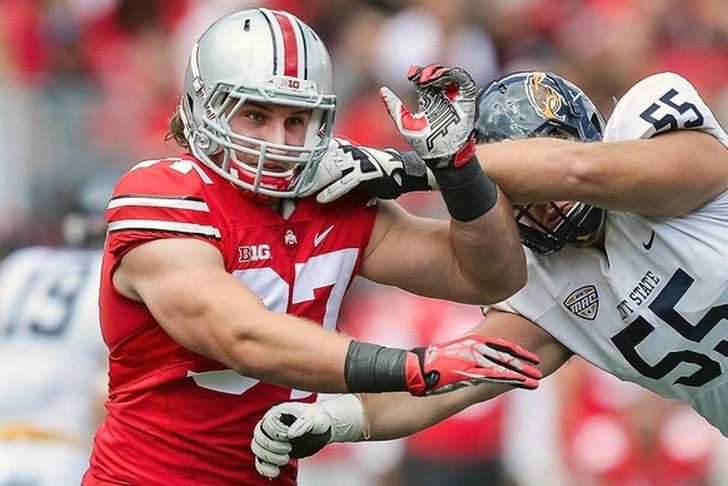 Former Ohio State Buckeyes defensive end Joey Bosa is sure to be a first round draft pick in the 2016 NFL Draft. The defensive end is widely considered one of the top players in this year's draft and is expected to be an early Round 1 pick. The top five is a likely possibility and it would be a major surprise Bosa slips out of the Top 10.

Bosa is best as a 4-3 defense end, although a team could move to outside linebacker in 3-4 scheme. Bosa doesn't have J.J. Watt ability, but few players do. Bosa profiles as a solid starter in the NFL and should contribute right away.  With that in mind, here are 5 Teams That Could Draft Joey Bosa.

Cleveland Browns
Consider this Bosa' ceiling. The Titans likely won't be taking Bosa, but there's a chance the Browns could. Cleveland's first priority in the draft is a QB such as Jared Goff or Carson Wentz. However, the Browns could sign Brock Osweiler or even swing a trade for Colin Kaepernick. While that's a long shot, it would put them in a position to draft Bosa. While Bosa isn't a great fit for the Browns' 3-4 scheme, a portion of the fan base wants the Buckeye product and he'd no doubt help the defense.

San Diego Chargers
The Chargers also run a 3-4 scheme, meaning Bosa might not be the strongest of fits. However, the teams is reportedly high on Bosa and could make him the selection. If the Browns take a QB, there's a good chance San Diego ends up taking Bosa. For more on the NFL Draft, download the Chat Sports Android and iPhone app.

Dallas Cowboys
The Cowboys' 4-3 scheme is a much better fit for Bosa. The team needs defensive end help, especially with Greg Hardy unlikely to return and Randy Gregory suspended for the first four games. The Cowboys will likely go defense in Round 1, and they met with Bosa at the combine. The Cowboys likely have Bosa near the top of their board, but another defense player such as Jalen Ramsey or Myles Jack could be higher.

Jacksonville Jaguars
If Bosa slips to No. 5, then the Jaguars are a prime candidate to take him. They took Dante Fowler in the first round last year, but need another DE to pair with him. Fowler is a smaller, quicker end and pairing him with Bosa would a deadly combo. The Jaguars need more defensive help and Bosa would contribute, and likely start, right away. Download the Chat Sports Android and iPhone app for more NFL Draft coverage.

Tampa Bay Buccaneers
This is the likely floor for Bosa, barring some unforeseen injury or character concern occurring in the next few weeks. Tampa Bay badly needs a pass rusher at defensive end and Bosa is the best 4-3 DE in this year's class. If Bosa happens to slip for some reason on draft day, the Bucs will likely end that slide.