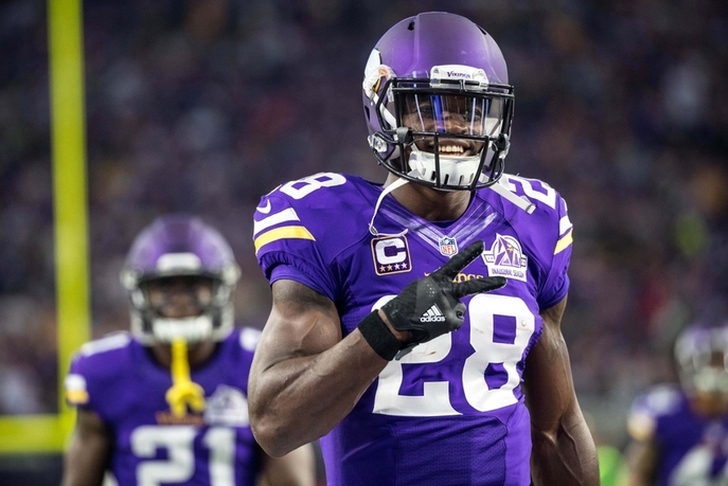 The Minnesota Vikings officially released All-Pro running back Adrian Peterson last week, a move that was expected. Despite being one of the league's best backs, Peterson was due $18 million for the 2017 season, will turn 32 years old soon and is coming off of knee surgery. However, despite being one of the best running backs of all time, he isn't receiving the interest he expected on the open market. Peterson expressed interest in signing with both the Patriots and Seahawks, but both teams are choosing to pass on him. So, who will he end up with? Here are the five teams that are the most likely to sign him:

5) Minnesota Vikings
Peterson left the door open to returning to the Vikings, but the chances of that happening are low. Yes, Minnesota didn't want to pay him the $18 million, but they could have tried to restructure his deal instead of simply releasing him. The Vikings have re-entered the running due to the lack of interest in AP, but are still on the outside fringes.

4) Oakland Raiders
Oakland is letting starter Latavius Murray test free agency, meaning they have a need for a starting running back along with cap money to spend. They have been linked to Peterson, but may choose to spend their money on upgrading their defense and draft a running back.

3) Green Bay Packers
How fitting would it be if Peterson ended his career in Green Bay like Brett Favre finished his career in Minnesota? Eddie Lacy is a free agent, and the Packers haven't had a reliable running game to pair with Aaron Rodgers for the past couple of seasons. Adding Peterson to the mix would make them the favorite to win the Super Bowl.

Of course, the Packers are notorious for not spending money on high-priced free agents. Will they make an exception?

2) Tampa Bay Buccaneers
Tampa Bay is one of the three teams Peterson originally said he was interested in signing with, and it makes a lot of sense on paper. The Bucs already run a downhill running scheme with Doug Martin, who Tampa may cut ties with this offseason after he was suspended for violating the league's drug policy last year.

1) New York Giants
The Giants were another team that Peterson has openly expressed interest in, and did so again on Twitter after New York cut starting running back Rashad Jennings. They would have to change their offense a bit to have Eli Manning under center more, but they may not pass up a talent like Peterson. Plus, he loves the bright lights and the idea of playing on the New York stage.