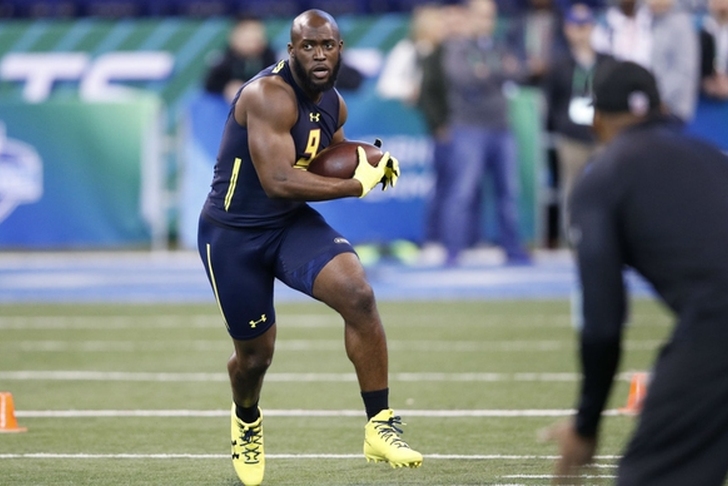 The 2017 NFL Draft Combine is in full swing and will run through Monday, March 6. Today was the start of on-field workouts, and there have been plenty of surprises so far. Here are the five biggest surprises at this point in the combine:

1) Leonard Fournette's pros and cons
LSU running back Leonard Fournette came into the combine as one of the major players to watch, and he has had a very up-and-down performance - though it is trending up. First, Fournette weighed in at 240 pounds, which is considerably more than his listed playing weight of 230. That led to some concerns about how his athleticism would test, and he gave some merit to those concerns with a 28.5-inch vertical jump, which ranked third-worst among all running backs.

However, he redeemed himself in a big way in the 40-yard dash. He posted a 4.51 time, which is the fastest ever by a running back weighing at least 240 pounds. For comparison, Dalvin Cook's best time was 4.50 and only nine backs ran faster times. That 40 time suddenly eliminated concerns about his weight, turning it into a positive instead.

2) Jabrill Peppers' height
Michigan's Jabrill Peppers came into the combine among the players with the most to prove given his position change from linebacker to safety, and like Fournette, his measurements turned heads for the wrong reasons. After being listed at 6-foot-1 and 205 lbs. this year for the Wolverines, he checked in over two inches shorter and a few pounds heavier.

The added weight indicates that Peppers is trying to bulk up to continue playing in the box in the NFL, but his height was shocking and is a big concern for some teams.

3) Christian McCaffrey is breaking records
McCaffrey was another player scouts were watching intently to see how he tested, and he performed extremely well. After running a 4.49 40-yard dash (tied for fourth best in the class), McCaffrey recorded one of the all-time best times in the 3-cone drill.

The 2nd fastest by an RB at the #NFLCombine since 2003. It evals agility, quickness, fluidity.

That time erased any and all doubts about McCaffrey's athleticism and how it would translate to the NFL.

4) Browns interest in Mitchell Trubisky
Texas A&M defensive end Myles Garrett was the consensus No. 1 pick coming into the combine, but that may not be the case anymore. The Cleveland Browns are "strongly considering" drafting former North Carolina quarterback Mitchell Trubisky with the No. 1 overall pick in the upcoming NFL Draft, according to Mary Kay Cabot of Cleveland.com.

Trubisky, the Mentor, Ohio, native, checked off one of Hue Jackson's major boxes Thursday when he measured 6-foot-2 1/8 at the NFL Combine.

One top NFL personnel executive told cleveland.com Thursday that he'd definitely take Trubisky No. 1 now that he measured over 6-1. "He's got size, he can move, he sees the field, has a big arm and more upside than Carson Wentz last year. They'd be set,'' he said.

5) Browns, Titans interested in trading picks
If the Browns openly decide to pass on Trubisky with the No. 1 pick, or think they can get him later in the draft, they are willing to trade the top overall pick.

“We're going to responsibly listen to any opportunities that are out there,” general manager Sashi Brown said. “I think we have to do that. We would have to wait and see what might come and what player might be available there as we get through this process.”

Tennessee Titans general manager Jon Robinson said they are also open to moving out of the top five and are "open for business" with the No. 5 pick.

“It’s got to be a two-way street. We’ve got to have somebody that wants to move up to that spot,” Robinson said. “But like I said last year, we’re open for business and willing to have discussions. We’re just again trying to put ourselves in position to improve the football team.”

Last year, the Titans traded the No. 1 overall pick to the Los Angeles Rams, who used that pick to select Jared Goff.