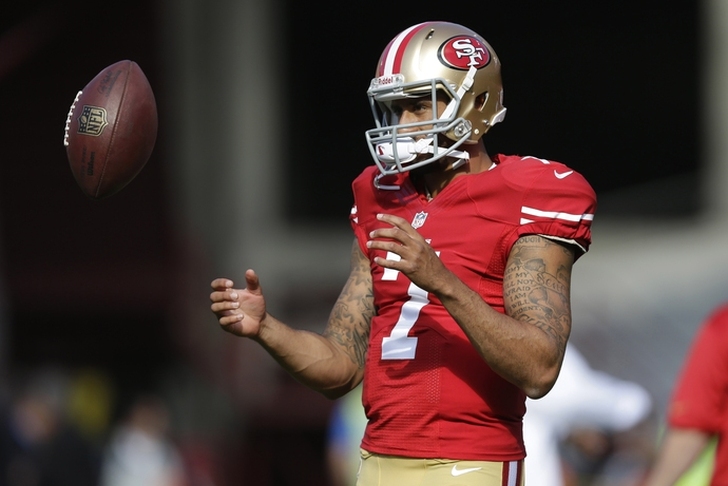 On Wednesday, the San Francisco 49ers announced that they planned to keep quarterback Colin Kaepernick for the 2016 season. On Thursday, it was reported that Kaepernick's agent asked the 49ers for a trade. Kaepernick was benched by the 49ers last season in favor of Blaine Gabbert. While Kaepernick is a great fit for Chip Kelly's offensive system, it appears that Kaepernick wants out.

The 49ers likely won't cut Kaepernick, meaning the only way a team can acquire him is via a trade. Kaepernick signed a length contract with the 49ers before the 2014 season and is signed through 2020. However, the contract has little guaranteed money after this season. Kaepernick's cap hit for next season is nearly $16 million, with roughly $12 million of that coming as a base salary. For more on Kaepernick, download the Chat Sports Android and iPhone app.

However, there are a few teams that need quarterback help and could take a chance on Kaepernick finding his previous form. While it's unclear if the 49ers will actually deal Kaepernick, it is a possibility. With that in mind, here are four teams that could trade for Colin Kaepernick this offseason.

4. New York Jets
Ryan Fitzpatrick is a short-term option and has been very good this year, but he's not the QB to lead the Jets for years to come. Geno Smith certainly isn't the answer, and Kaepernick would be a major upgrade over Smith. Rookie Bryce Petty is still years away from contributing and Chan Gailey, their offensive coordinator, prefers a mobile quarterback. The Jets and Kaepernick have already been linked once this offseason. Money might be an issue since the Jets are tight on cap space, but this is a possibility.

3. Los Angeles Rams
The Rams are in need of a QB, unless they truly believe Case Keenum is the answer. The Rams wouldn't ask too much of Kaepernick, as Todd Gurley is the star of the offense. Kaepernick could have success Working against the Rams is that the 49ers might not want to deal Kaepernick within the division.

2. Houston Texans
Bill O'Brien is a quarterback guru, and it's impressive he's gotten the Texans as far as he has given his current crop of quarterbacks. Kaepernick needs work as a passer, and there are few coaches better at getting the most out of their QBs than O'Brien. Kaepernick makes sense for the Texans, especially since they might be drafting too late to grab a true franchise signal-caller. However, O'Brien could prefer a more traditional passer.

1. Cleveland Browns
It's clear the Johnny Manziel Era was a complete disaster for the Browns. The Browns need a new franchise QB, as Josh McCown is a replacement-level start. However, he'd be a good veteran presence for Kaepernick, something he lacked in San Francisco. The Browns might be able to get Kaepernick for a mid-to-late rounder, which would allow them to spend their first rounder on a weapon that they need. Plus, current Browns head coach Hue Jackson wanted Kaepernick when he was with the Oakland Raiders. If Kaepernick is dealt, then the Browns might be the most likely option. For more Browns coverage, download the Chat Sports Android and iPhone app.